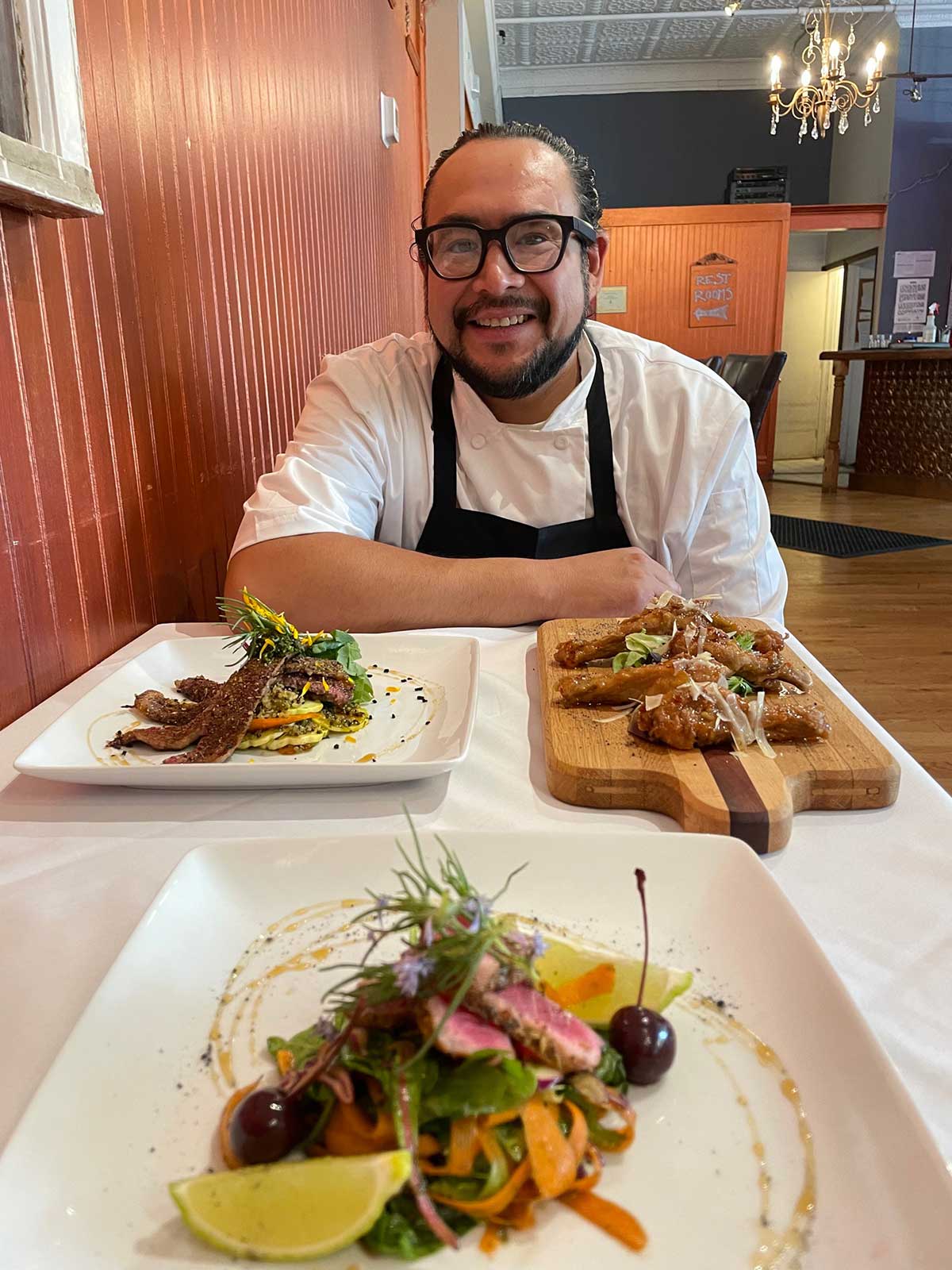 Sitting across from Leroy Alvarado, Executive Chef and co-owner of La Vita Bella, it’s hard not to appreciate his warmth and courtesy. His approach may be due to the fact that each day he’s engaged in something he really enjoys: running a restaurant kitchen.

Conversation points range from talk about heirloom corn and succulent garnishes to the multitude of ways mole can be prepared authentically. All of it is discussed with passion and respect.

Alvarado has the kind of restaurant background which would allow him to get away with being far less well-mannered. He was Sous Chef under Fernando Olea at Epazote and Sazon restaurants in Santa Fe and then became the chef and part-owner at Georgia, next to the O’Keefe Museum. He also opened a Southwestern/Indigenous cuisine-focused restaurant, Maiz. Through all of this, he was known for being one of the young, successful chefs to watch on the Santa Fe cuisine scene.

He’s brought those cooking chops to Main Street in Longmont where he’s helping La Vita Bella transition from a coffee shop to a farm-to-table, special occasion restaurant. He’s infusing many of his food passions into menu changes including a love for interactive food that keeps diners as close as possible to their food preparation.

“For private parties, at dessert, I’ll let people pick their own ingredients and then immediately make their sorbet or ice cream. It’s a fun occasion. I get to talk about the science (sic) about it. About what’s going on [sic].”

He also talked about engaging people in a recent farm dinner they had at Olin Farms, and about how people could enjoy food in the atmosphere where it was grown. In addition, he loves to bring out his barbeque and smoke on the street in front of his house and plans to allow diners to be able to cook on a hot rock.

Alvarado first connected with cooking when he cooked with his grandmother for church groups. “I guess I found my spark for being a chef when I was young,” he said. “We cooked for a few hundred to a thousand people every Sunday. I would be the one preparing the food. It got me in the mindset of how feeding people made me happy. I noticed that. I actually went to school to be an electrical engineer, but switched to culinary.”

He cooked for a while in Arizona and studied at Le Cordon Bleu in Scottsdale before moving to Santa Fe to work under Olea. “A lot of these intricate things for chefs to do were easy for me. He brought out my talents without me knowing it,” he said. “Olea had a very southwestern flair for his food, like roasting certain nuts before you cook them, or how to prepare your chilis or moles. All of these things were in my head already.”

He also credits Olea for helping him learn to plate. “There were a lot of days where there were me with blank plates just drawing out designs just to practice for a dinner.“

Alvarado also loved the small city, cosmopolitan environment of cooking in Santa Fe where “the pace of life is much different. It’s very touristy. They call it ‘the land of mañana’ because everyone is slowed down and can (sic) happen the next day.”

He’s quick to describe how the Boulder County area compares. “I feel like Longmont and Boulder is slower (sic) but not too busy. You can still get a lot done and it is so beautiful here. You can go to the mountains, enjoy a river.“

Alvarado came to Longmont to be closer to his children and now that he’s here, he wants to continue to focus on showcasing how various cultures affect their food, which is a huge part of his passion. On a brisket plate I tried, it included a Middle Eastern-flavored chimichurri, local Boulder honey, and an American-favored smoked brisket with Native American quinoa. “It’s kind of bringing all of these cultures on to this plate,” he explained.

That’s clear as he cooks. And as the restaurant continues it will be interesting to see how this food evolves through seasons and through years.