The second campaign finance report for the City of Louisville Special Election disclosed that the developer-funded “Yes for Louisville” campaign continued to dramatically outspend it opposition by more than 30 to 1. A Special Election, which is to be tallied on April 19, will decide the fate of Redtail Ridge, a 3-million SF office and industrial park located along US-36 in Louisville.

Nearly all of the Yes for Louisville money – a staggering 93.9% – was provided by Brue Baukol Capital Partners, a Denver-based real estate investment firm that owns the 390-acre Redtail Ridge property.i

The latest campaign reports, submitted to the City of Louisville on April 15, reveal that Brue Baukol has provided $85,245.78 of “inkind contributions.” Many in Louisville say these numbers prove what has long been suspected: developer Brue Baukol is trying to buy the Special Election.  https://www.louisvilleco.gov/home/showpublisheddocument/34717/637857165933483437

“The developer has spent tens of thousands of dollars spreading professionally-crafted misinformation in the belief that residents can be persuaded to vote against their collective best interest,” said Louisville resident Justin Solomon. “It begs the question, if this development is good for Louisville and its residents, why would they need to outspend a citizen-led and funded campaign 30 to 1 in order to pump out misleading information and scare tactics?” 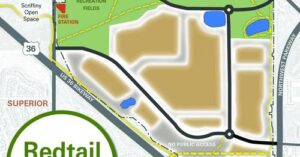 Most of the Brue Baukol campaign funding has been used to produce videos, mailers, and internet ads. For the past month, developer-funded marketing efforts have flooded the internet urging Louisville voters to vote “Yes” on Redtail Ridge. The largest sum went to a New York digital marketing firm that specializes in influencing local elections on behalf of corporate clients.  The marketing efforts supporting Redtail Ridge erroneously claim that a “No” vote means less open space, no extension of Campus Drive through the Monarch Schools, and that Avista Adventist Hospital will leave Louisville.

“The Yes Campaign should stop embarrassing itself with false advertising. Neither Avista Hospital’s presence in Louisville nor the extension to Campus Drive are dependent on our vote,” said Cindy Bedell of Citizens for a Vibrant, Sustainable Louisville.  “The vast majority of Louisville residents overwhelmingly support open space and want view shed preservation, contiguous open space, and a buffer between neighboring Broomfield.”

“Their total Public Land Dedication only includes 59 acres of actual open space that runs along the north border,” said Angele Sjong, a Louisville resident since 1996. “It is a narrow strip of land, located between a four-lane road and five-story buildings, and cut in half by a four-lane road. Does this fit the spirit of open space? Voting ‘No’ on Redtail Ridge supports a smaller development which preserves more land. Voting ‘No’ also sends a strong signal to City Council that purposeful open space, with view sheds and wildlife habitats are important to our residents.”

Colorado Statutes do not require truth in advertising. While the FCC has some rules that apply to political advertising, political speech is covered under the 1st Amendment. There is no state law that would override that authority. Combined with virtually no campaign spending limits, grassroots organizations are hard-pressed to compete. “Unfortunately, the incessant false advertising efforts funded by an out-of town developer has already swayed voters to choose ‘Yes’,” says Tamar Krantz, a 19-year resident of Louisville. “If I were on the fence about how to vote today, I’d seriously consider this disparity in funding.”

One state law that should help undecided voters is the FCPA. This requires disclosure of who is paying for advertising. Undecided voters should look for the “Paid for by” disclaimer to recognize advertising. Despite nearly $100,000 in campaign spending by supporters of Redtail Ridge, Louisville voters will make up their own mind by Tuesday.