Developers have found ways to bypass local opposition, including community and city trustee votes, to continue projects that should have been rejected

If community push-back, irreversible environmental impacts, and increased traffic congestion are not enough reasons to oppose new development, maybe evidence of skirting regulation, verbal attacks on a city trustee, and an unethical vote by a mayor might.

For any proposed development, some community pushback is inevitable, but citizens of Louisville and Superior are making it known this was not how they envisioned their hometowns developing. Both localities are facing large-scale development projects that would change the face of their respective communities. For Superior, it is a downtown project called the Coal Creek Innovation Campus that would bring much-needed tax income and local business. In Louisville, there is a commercial project called Red Tail Ridge that would finally see the land near the southern part of the city developed under its approved use. However, the reality is that neither project was quite so straightforward.

Superior faced what some citizens have described as a “bait and switch” from developers and city trustees playing inside ball. The Coal Creek project was initially billed as a vibrant downtown space that would provide several blocks of restaurants, shops, and entertainment to what is otherwise known as a “bedroom community,” a town in which citizens commute elsewhere to work. It would create a reason for people to visit and spend money here, which would raise the tax revenue of the city and lead to an overall improvement in quality of life. That was the idea.

By the time the plan was presented at a Superior town hall meeting on June 27th, the Coal Creek Innovation Project included a life science campus, a rather large one at that, with over 350,000 square feet dedicated. Citizens began to wonder why they were sold a vision of a vibrant community downtown while, instead, a large science campus with no guaranteed tenant to move in was being developed.

“What happened to the downtown? This is an office complex, not a downtown,”  local realtor Lauren Hughes Schneidewind states.

Hughes Schneidewind and another resident, Daniel Rice, filed a since dropped lawsuit alleging city trustees did not follow proper voting procedure on the project during a controversial August 22nd meeting. 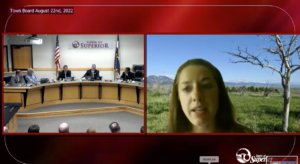 That August night, city trustees took a vote to continue their meeting past the 11 pm deadline in order to further discuss topics that were not resolved regarding the Coal Creek life science campus. Trustee Laura Skladzinksi was present via Zoom while in New York on business. She voted not to continue the meeting. Skladzinski explains, “We’re all just not making great decisions when it gets to be 11 pm or midnight.” Skladzinski chose to log off, which caused confusion among the residents in attendance.

The departure of a trustee was not handled with tact. Citizens were not informed that Trustee Skaldzinksi had left the meeting of her volition. Some wondered if her internet connection had dropped. Mayor Clint Folsom chose to wrap up the discussion, and trustees soon motioned to vote on this portion of the Coal Creek proposal. Skaldzinksi’s absence afforded the mayor and other pro-development trustees an opportunity to advance the life science option that would likely have been defeated had she been present to vote. Hughes Schneidewind, who was at the meeting, expands.

“We weren’t privy to who was logging off. The [city] attorney didn’t stop it and say ‘Hey, we should probably look at procedure.’” 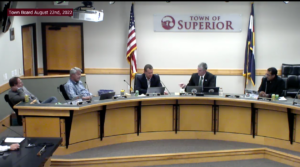 Instead, city trustees proceeded, knowing the present votes would favor the developer. “I do have concerns that it got into a vote so quickly,” Skladzinski explained. “I am disappointed with how it happened”

Residents were confused and outraged. Some even took to personal attacks on Skladzinski, who they blamed for causing the vote to pass by logging off the meeting. “Right after August 26th, my cell phone number was given out. I started getting literally hundreds of calls and text messages a day telling me I was a terrible person,” she told me.

The August 22nd vote was also challenged via petition by citizens Ryan Hitchler and Jason Serbu asserting that an absent trustee counts as a “No” vote, and therefore the approval was never legally granted that night.

Regardless of the legality, the ethicality of hastily pursuing a late-night vote when your colleague is no longer present on an unresolved issue instead of consulting the city attorney is called into question.

Superior City Code Sec. 2-8-50 states that “Any board member who refuses to vote, except when abstaining pursuant to this article, shall be deemed guilty of misconduct in office, and a negative vote shall be cast and recorded in the board member’s name.” The effect of this petition could change the outcome of the vote, meaning the life sciences portion would no longer be approved.

The lawsuit and petition were filed around the same time. Ultimately, neither measure was needed, but both sent a clear message. During the Superior Town Hall meeting on November 14th, the proposed life science portion of the project was voted down. Developers will head back to the drawing board after receiving clear messaging from Superior residents. However, even a “No” vote does not mean the end of similar potential projects. 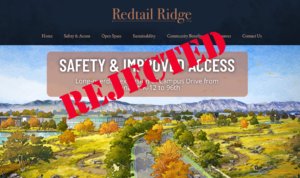 The citizen action to drive a vote on a proposed development echoes previous battles in nearby Louisville, where another saga involving developers, city council, and citizens has been unfolding for years. Brue Baukol Capital Partners submitted plans to develop land that was once regulated and zoned for a Conoco-Phillips campus, an area called Red Tail Ridge, which Yellow Scene Magazine previously covered. Conoco-Phillips restructured, and the campus never materialized, but the regulations around the type of development approved under that plan remained. “That plan does not expire. That runs with the land,” explained Rob Zuccaro, Director of Planning & Building Safety for the City of Louisville.

This limits what developers can build here. Brue Baukol first attempted to develop Red Tail Ridge under a General Development Plan Amendment, which would have given them more flexibility to change the old Conoco-Phillips zoning. Changing the General Development Plan requires a public vote, and when election day came in April 2022, citizens rejected it, citing reasons such as increased traffic congestion and environmental concerns. Many even challenged the need for such a large commercial space, especially when the community is still rebuilding homes lost in the devastating Marshall fire.

Developers have the wealth, resources, and connections to continue to pursue lucrative projects even when defeated by voters. Instead of amending the general plan, Brue Baukol submitted the project as a Subdivision Plat. This type of submission has more limitations on development but crucially does not require updating the General Development Plan, which would trigger a citizen vote. Director Zuccaro explained, “Because the purpose of those two types of applications are different, there’s nothing that prohibits them [Brue Baukol] from submitting for the subdivision plat.” This would give developers another avenue to continue their projects even if voted down by the public.

The results and impacts to the town would be strikingly similar either way. Mass grading of land would destroy much of the natural space. Nearby roads would face increased traffic congestion with no long-term mitigation plan required. With worsening air quality, according to the EPA, and no public transportation options, the increased traffic for the nearly 3 million square feet of office would be devastating.

One proposed solution to traffic is to construct a four-lane highway called Campus Drive. The road would cross the Goodhue Ditch, the only natural wetlands on the proposed development. It is a perfect confluence of environmental concern, traffic impact, and regulation being ignored. This potential solution raises more problems. YS was alerted to an internal email from the Army Corps of Engineers to the permitting company ERO Resources and developer Brue Baukol showing apparent evidence of a skipped step in this permitting process.

In part, the email states, “…long story short the relationship isn’t great, so [in] the interest of saving time and aggravation for everyone, we are going to go ahead and issue an exemption for this project. It will be considered construction of an irrigation ditch, which is exempt under Section 404(f) and won’t require a permit.”

The City of Louisville is aware of the above email. Director Zuccaro states, “I have seen the email. And the applicant has provided a letter from the Army Corps of Engineers, you know, that shows a permit exemption. We would not get involved as city staff… We would only require that they submit their final approval.” When asked about granting the Goodhue ditch exception, the Army Corps of Engineers stated that they will not be able to comment on specific projects.

What connects these two towns is the struggle of the ordinary citizen against developers over the divergent visions each party has for their respective homes. Even when put to a vote, developers have found ways to overcome citizen opposition, and officials have skirted rules to help approve large commercial projects.

But people here are not giving up. They have formed citizen coalitions, filed lawsuits, doggedly pursued petitions, and shown up in droves to council meetings. They have demonstrated sustained passion for years. Despite the confrontational nature of these struggles, it actually reveals a deep-seated love organizers have for their communities. It shows the passion they feel for their towns and illuminates a desire not to let “the big guy” change the face of the land they love.

Hughes Schneidewind still sees the positive beneath the layers of red tape and bureaucratic navigation, “So we’re all coming together as a community. It’s nice to see that community connection again, which I think was washed a little bit during COVID. I know more of my neighbors so I’d say that’s the silver lining of this entire process. I get to know people again.”

View all posts by Austin Clinkenbeard →
Austin Clinkenbeard has been traveling the world with his wife for the past several years exploring food, history and culture along the way. He is a passionate advocate for stronger social science education and informed global travel. Austin holds degrees in Anthropology and Political Science from San Diego State. When he’s home there’s a good chance you can catch him cooking allergy friendly food. You can follow along Austin’s travel adventures and food allergy journey at www.NowWeExplore.com.