From the cobblestones of Pearl Street Mall to the outlets we pass by on our way to work, Boulder County offers a wealth of incredible food. We tried 12 of the best dishes that can be found in BOCO, including cuisines from the Timoto-Cuica tribe, beautiful barbeque, fungus grown in the deep forest, locally cultivated crops, and many others. These are restaurants where you can make memories with people you love or order take out from if you’d rather stay home and hang out with your dog. These are uncertain times and we all deserve a break and a good meal. Here are some of the best dishes in BOCO. 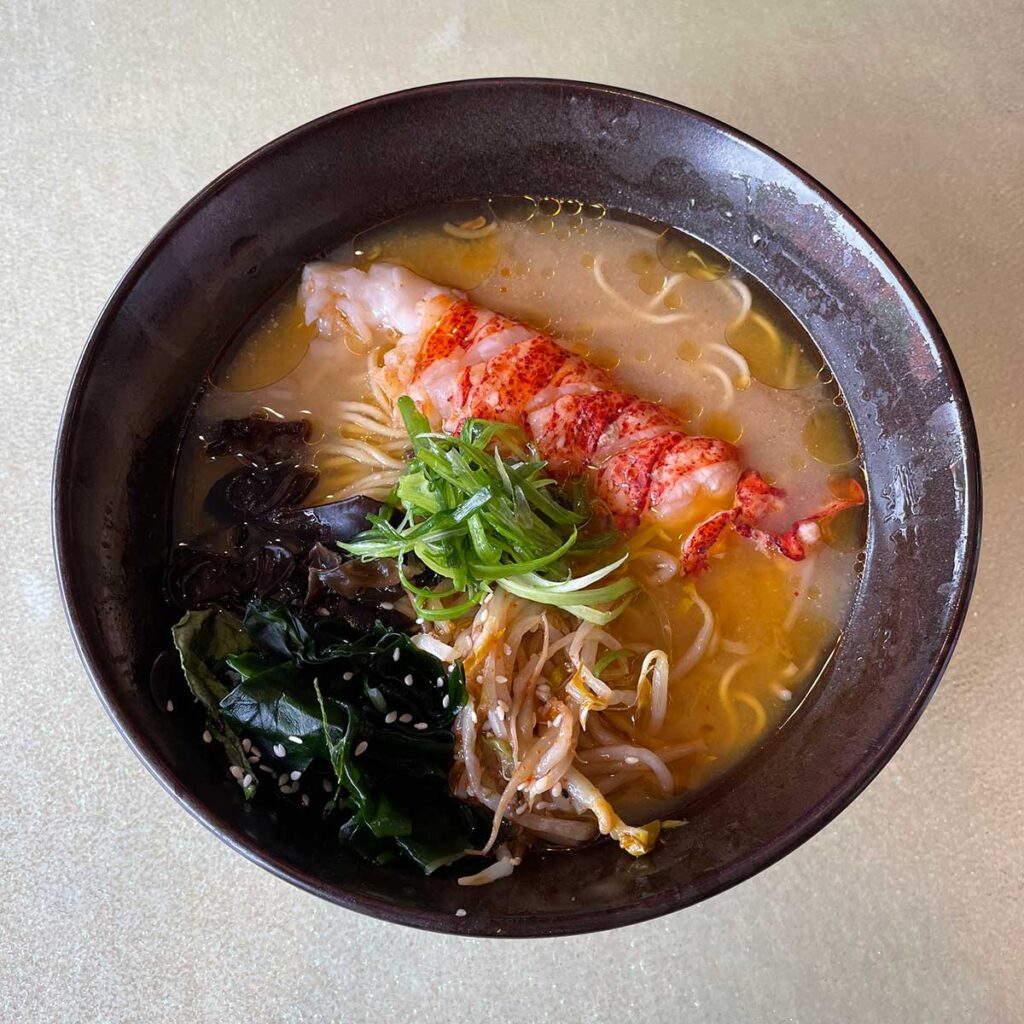 The Butter Lobster Ramen is prepared in a delicious miso bonito broth. It is served with ramen noodles and sprinkled with spices, sesame seeds , and crunchy wakame seaweed. The broth is savory and has a funky salty-sweet richness to it. The tender lobster tail swims in the broth and is coiled in the noodles.

The dish came from a day when Chef and Owner Edwin Zoe was brainstorming ideas and he realized he wanted to create a dish that merged his Taiwanese and American identities. He always had a love for lobster and ramen, but preparing the dish came with its own hurdles — there is a small window of opportunity to prepare the lobster correctly. The lobster will either turn out rubbery or tender. Regardless, that’s what makes cooking exciting.You’d think that out of all places, Boulder would be the last place to find delicious seafood, but you’d be wrong. Chef Zoe has put a creative spin on lobster, and you shouldn’t miss it. 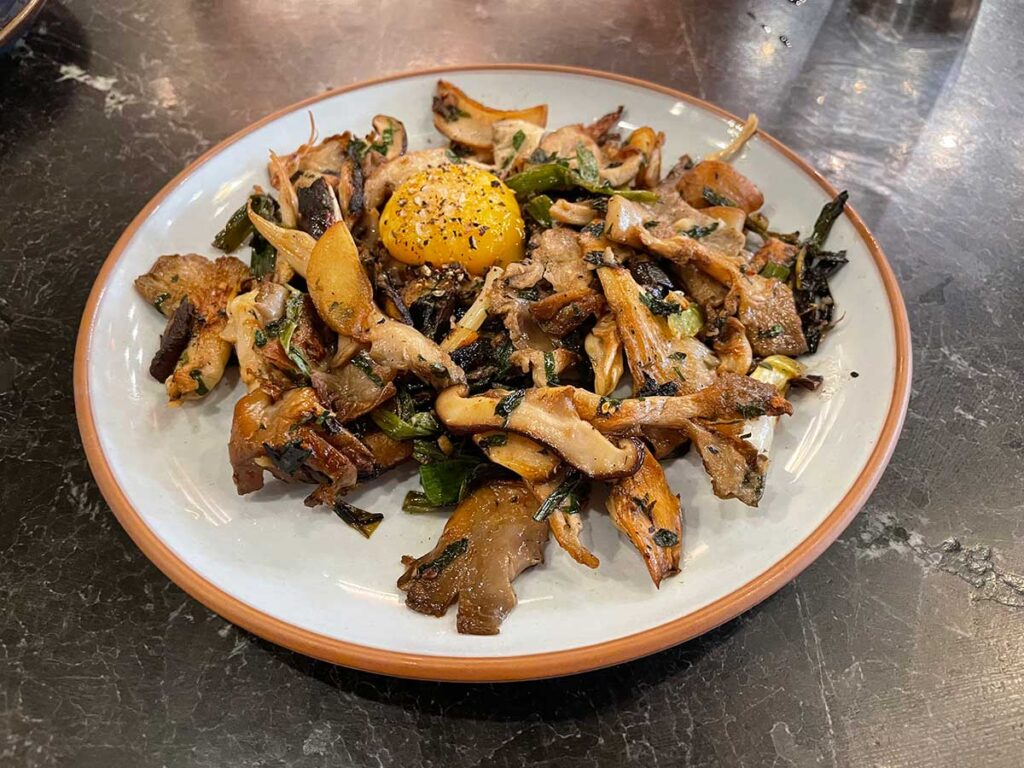 The Champiñones: I must admit that I was skeptical when Chef Brian Pierce’s dish was first placed in front of me. I’d never had mushrooms as an entree. But upon taking my first bite, I found myself overtaken by this dish’s rich savor, my concerns forgotten. The mushrooms burst with salt and umami and a bit of a sour center that leaves you feeling sweet. Oddly enough, it reminded me of Sour Patch Kids, which probably only means that I have an unhealthy diet. The salted and peppered egg yolk in the center combined with the mushrooms makes the dish warm and gooey, a testament to Chef Pierce’s ingenuity. 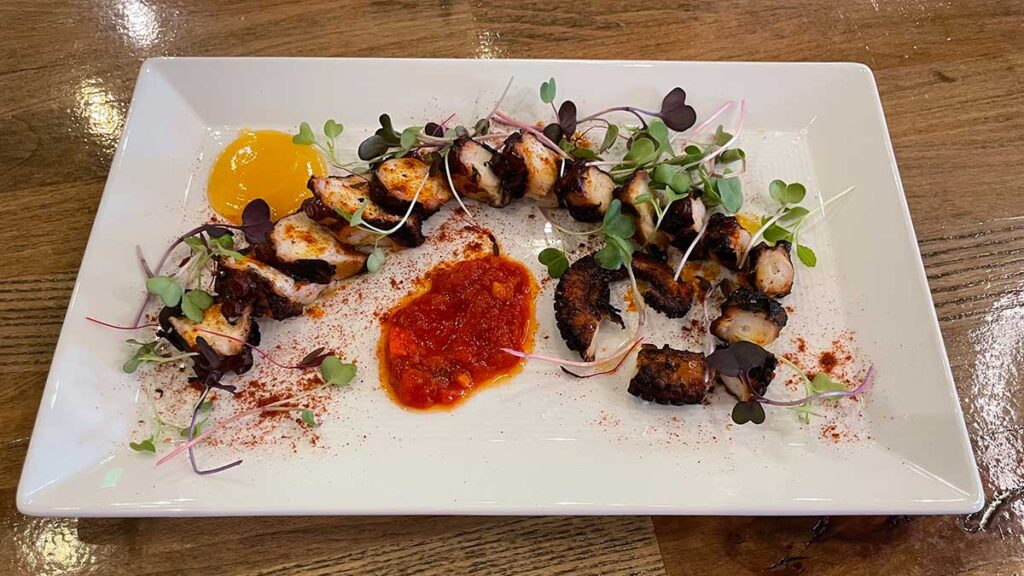 The Pulpo Piripi: At Piripi, Chef Hugo Meyer wants to create the perfect bite. Born in Argentina, he moved to Germany after finishing school, became a dishwasher at a pub and quickly rose to the role of General Manager. He spent the next years physically building restaurants himself in Spain and the Caribbean before marrying a homesick Coloradan and moving to Erie, Colorado. His Pulpo Piripi dish is the culmination of his quest for the perfect bite.

Served with olive oil, spicy paprika, and, interestingly enough, lemon meringue pie dipping sauces, the tentacle is embedded with sea salt and the suction cups fried to give the bite the right amount of crunch. The meat is stretchy and chewy, like a savory saltwater taffy. Share with your friends, if you don’t decide to hoard it all for yourself. 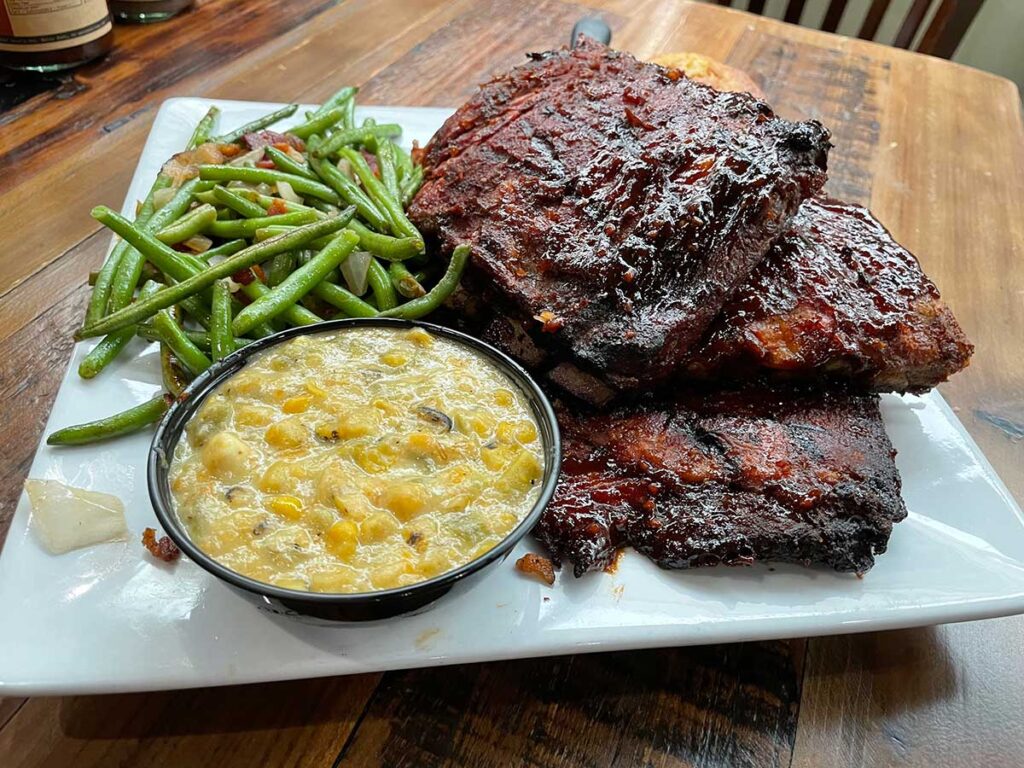 The St. Louis Pork Ribs: The ribs are wonderfully tender and sweet. You can basically eat it with a fork, as the meat peels off like licorice. At Smokin’ Dave’s, all of their dishes are smoked, roasted, and seasoned with hickory. They offer four signature sauces: Carolina Mustard, Spicy, Sweet Original, and Tangy. As for the side dishes, the string beans were well prepared, but the Southern baked corn didn’t impress me. All in all, Smokin’ Dave’s BBQ knows how to serve ribs. Bring your vegan friends just to taunt them! 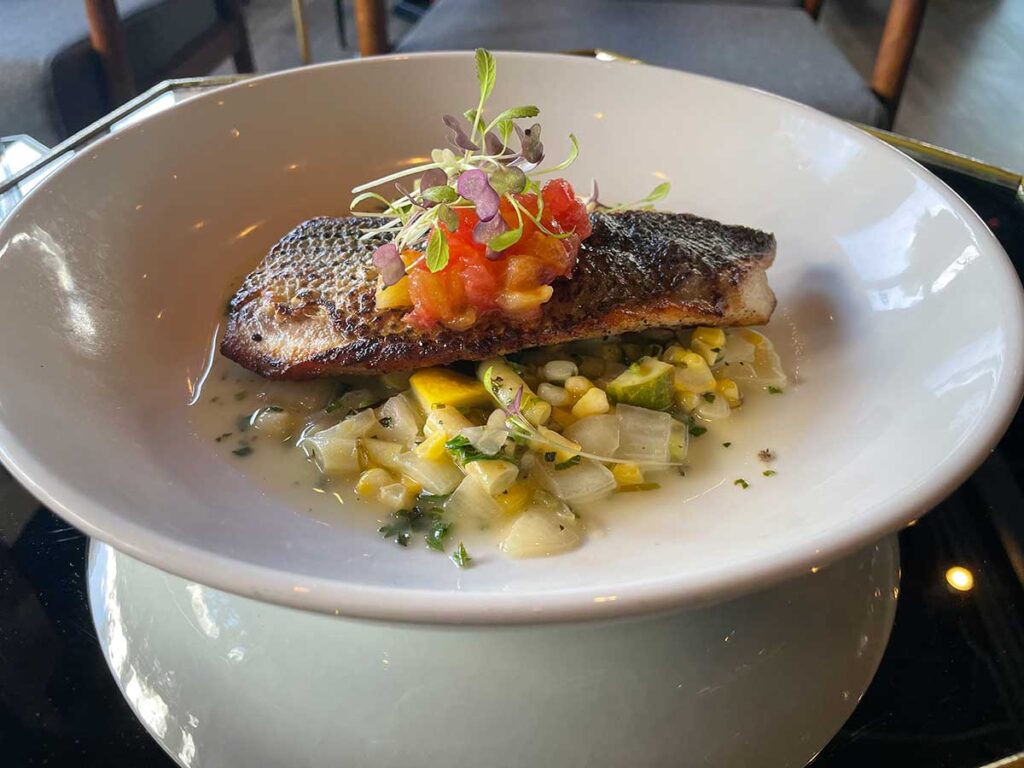 The Pan Seared Colorado Bass: Chef Patrick Balcom’s Pan Seared Colorado Bass is crisp to the touch. Once your fork pierces the skin, steam reaches towards the heavens. The meat underneath is pearly white and evaporates in your mouth. The peeled and chopped tomatoes stacked on top gives it a tender, juicy flavor — as does the summer succotash moat the bass lies in. The succotash is a mix of corn, snap peas, and summer squash, with a toss of squashed lemon, butter, and herbs. All are freshly cut and served in such a way even meat lovers will enjoy. It’s a bit pricey for the small portion, but if you’re trying to count your calories, this place is for you. 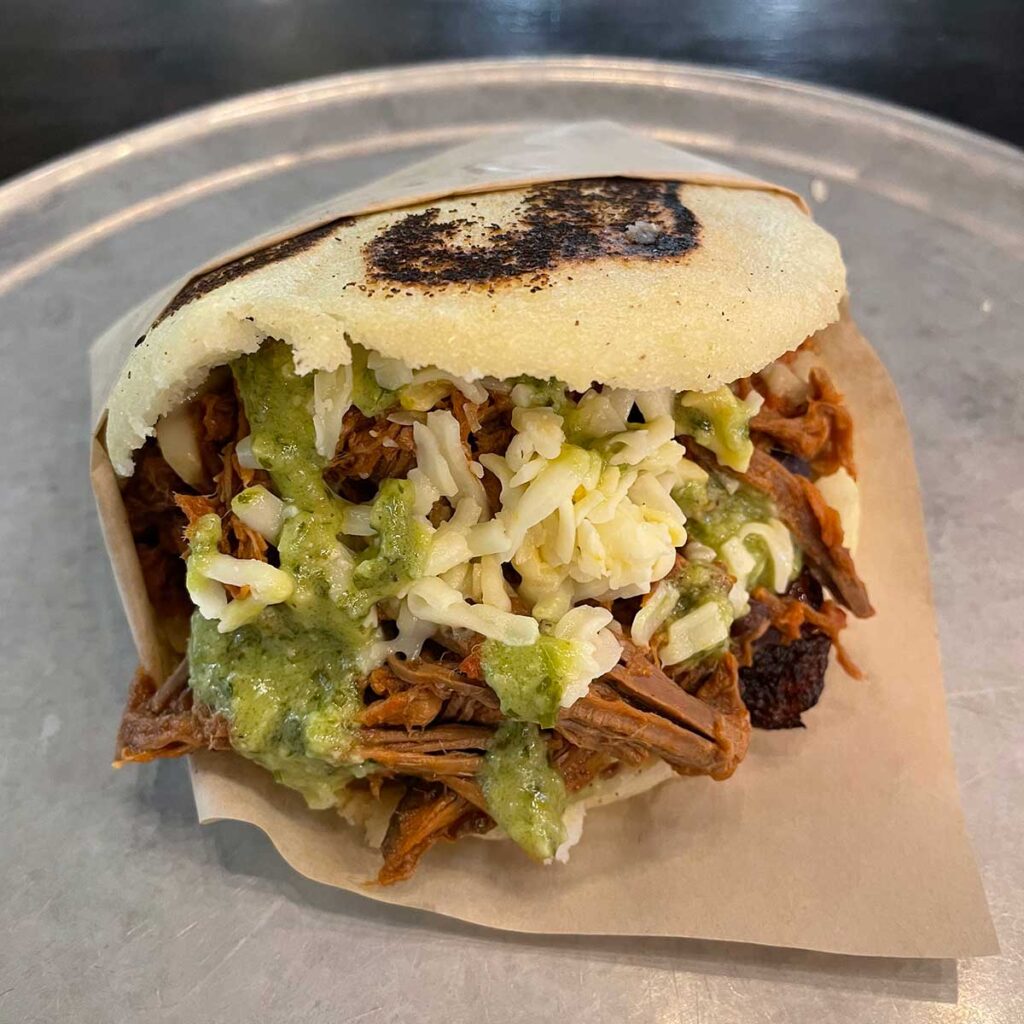 The Pabellon: Quiero Arepas is a small food vendor located inside of Avanti Food & Beverage — a food hall on Pearl Street. Inside, you’ll find each restaurant was built from what looks like cargo crates that were repainted to serve the chefs’ cultural identities. Quiero Arepas was built to celebrate the Timoto-Cuica tribe’s cuisine, a tribe that built their civilization in the Andes in Venezuela. One of their greatest cultural contributions is the arepa, a flatbread made of corn meal, water, and salt. After it’s grilled and baked, it becomes a vessel to hold some of the most delicious food you’ll ever eat.

At Quiero Arepas, Chefs Igor and Beckie Panasewicz served me the Pabellon. It is made with stewed and shredded beef, muenster cheese, black beans, fried plantains, and guasacaca. If there is anything I have to say about this dish, it is that I wish I had a bigger mouth! The arepa was so soft and crunchy at the same time, you could pull the pork apart like string cheese, and there were so many flavors that I lost track of. All of it just melts in your mouth, and even as I write this, I wish I had a Pabellon right now. 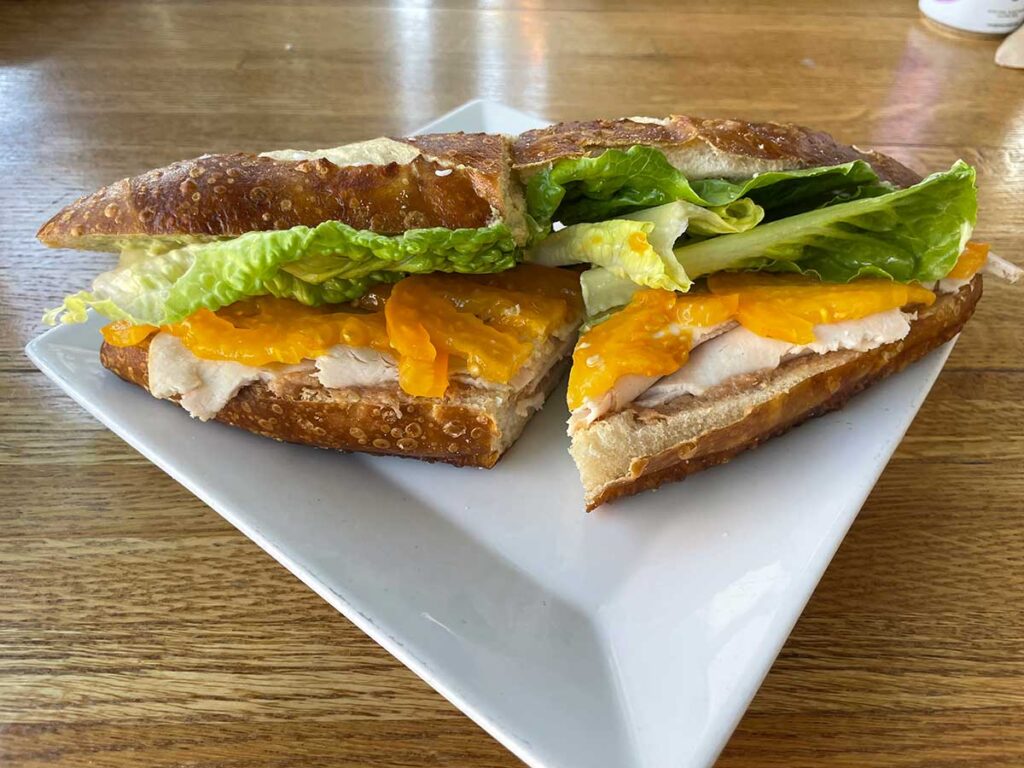 The Turkey & Bacon Jam Sandwich: The search for the perfect sandwich is an eternal one. At Organic Sandwich Co., your search may come close to ending. The Turkey and Bacon Jam Sandwich is made with roasted turkey, house-made bacon jam, tomato, crisp romaine, and avocado aioli on a pretzel loaf. It feels quite light in the hand but is surprisingly filling. Everything about it is fresh — the bread, the cold cuts, and the bacon jam spread is delicious. The pretzel bread is definitely the best part because it is not like that typical sliced loaf bread you get at the store. If Joey Tribbiani from Friends was a real person, he’d probably go to Organic Sandwich Co. about six times per day. 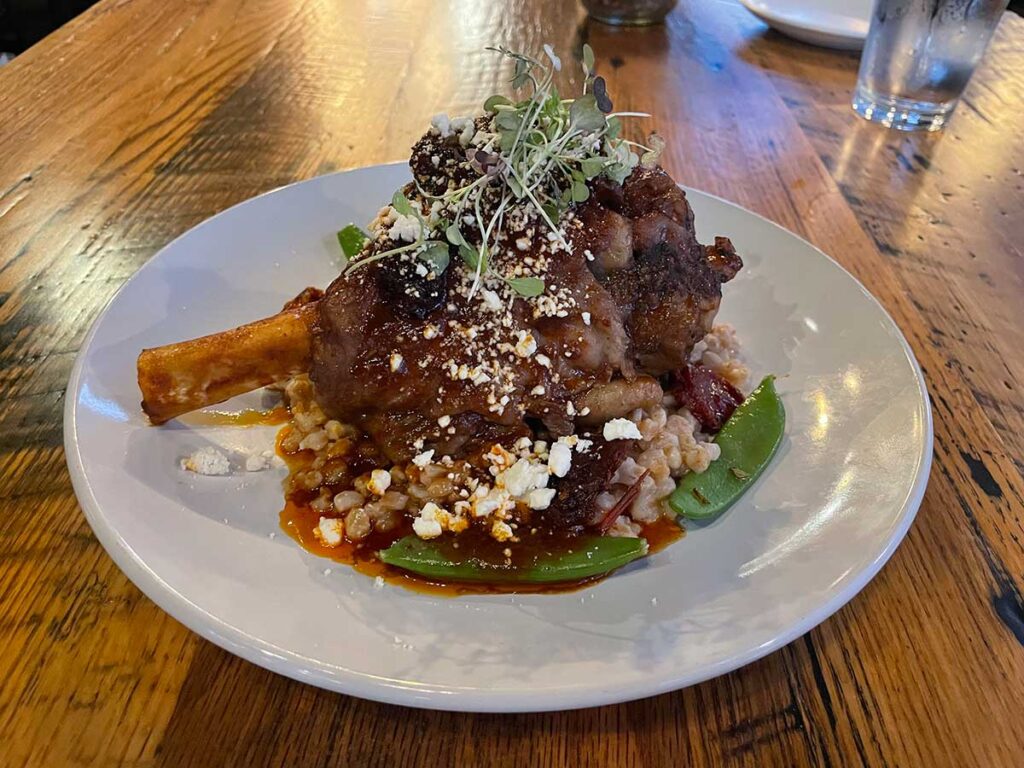 The Colorado Lamb Shank is the perfect meal for all you meat lovers out there. It’s a well-roasted course, delicately sprinkled with feta cheese on top. Some of its meat was dark, but that made it all the more enjoyable. As for side dishes, the salty farrotto and the snappiest of snap peas served as a nice balance to the lamb. The pepper jam was also delicious, and I have to remind myself to ask for the recipe. 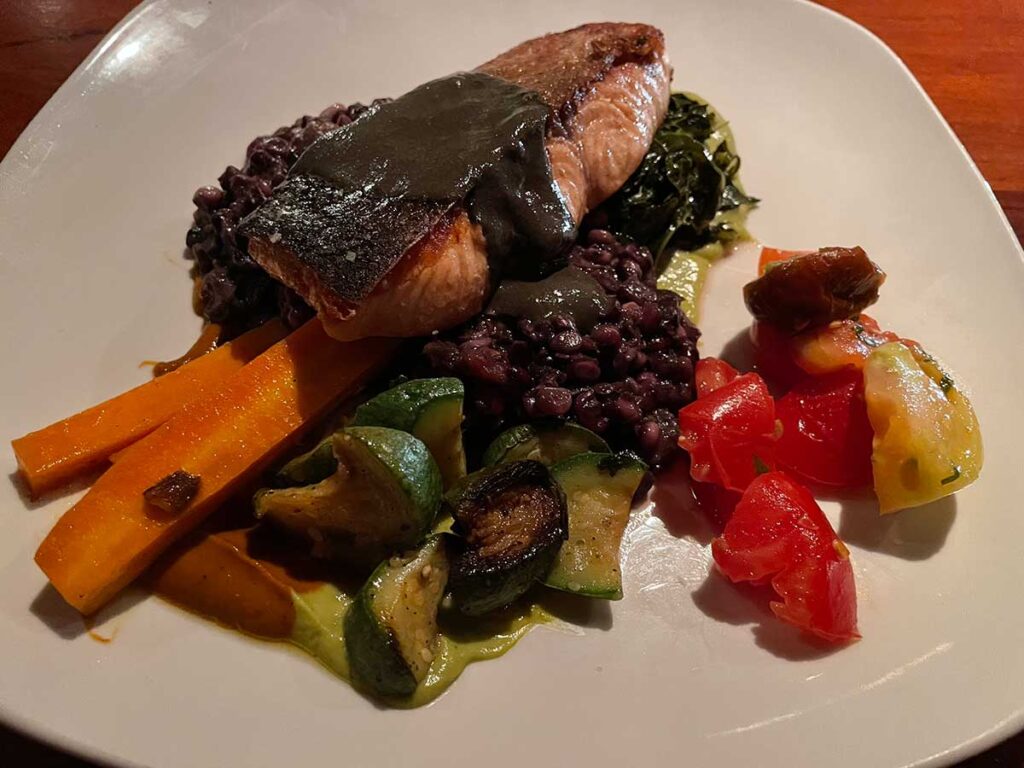 The Pan-Seared Salmon: Vapor emanates from this dish as it is placed in front of you, drowning your senses in a miasma of smells so enticing that you must remind yourself of the rules of civility and resist the primal urge to devour the thing whole. Silverware and etiquette. Must remember silverware and etiquette. The grilled skin is delectable, after being tossed in a butter-coated frying pan. The salmon itself is smooth, rich, and feels as if someone glazed the inside of it. It was like staring into an oblong pink pearl. Its flavor is owed to the white wine, lemon, and basil. Its side dishes make it all the better. The plentitude of Aztec corn is delightful. It is locally grown and served with Huitlacoche, a delicacy made from the fungus grown on corn. The summer squash and tomatoes are well prepared, but the carrots are a little undercooked. Bramble and Hare offers a 1920s speakeasy vibe: a dim-lit clandestine atmosphere but the Pan-Seared Salmon should be no secret! 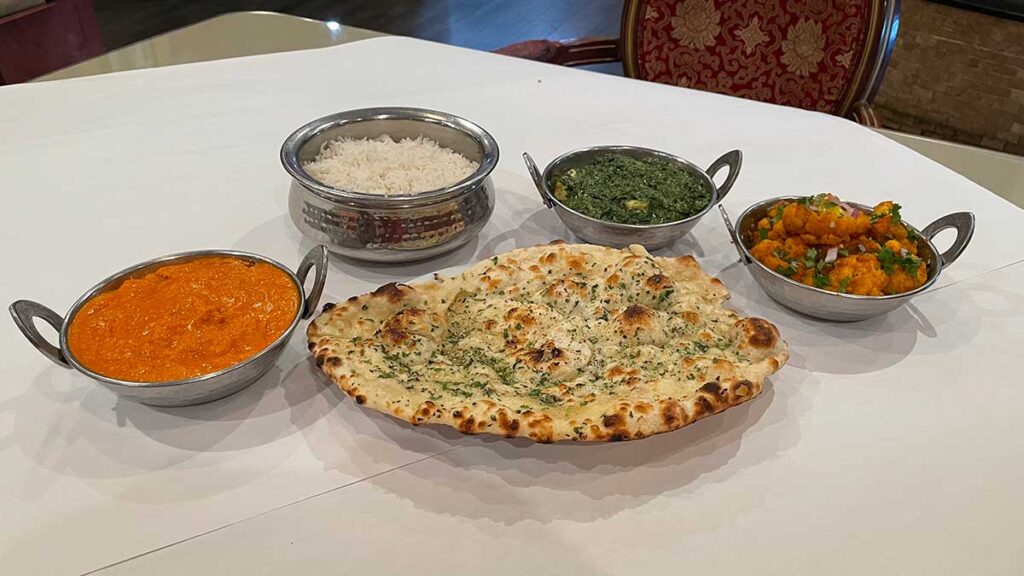 Garlic Naan, Basmati Rice, Chicken Tikka Masala, Saag Paneer, and Cauliflower Manchurian: The garlic naan was by far the best Indian flatbread I’ve ever had. It was fresh out of the oven, had a soft and flaky texture from the air pockets, and the oil from the garlic made it so much better. You’ll wish you could have more of it, but the naan is already bigger than the plate! It was the perfect complement for the chicken tikka masala. The masala is rich, and the chicken pieces are like little hot coals, but don’t worry, the basmati rice will help cool it down. The cauliflower manchurian is speckled in spice, and it was still crunchy without being overcooked. The saag paneer was slightly bitter and stringy, but your partner will remind you how healthy it is. Taj Mahal is a great restaurant to bring your family, so stop by the next time you’re hungry for naan! 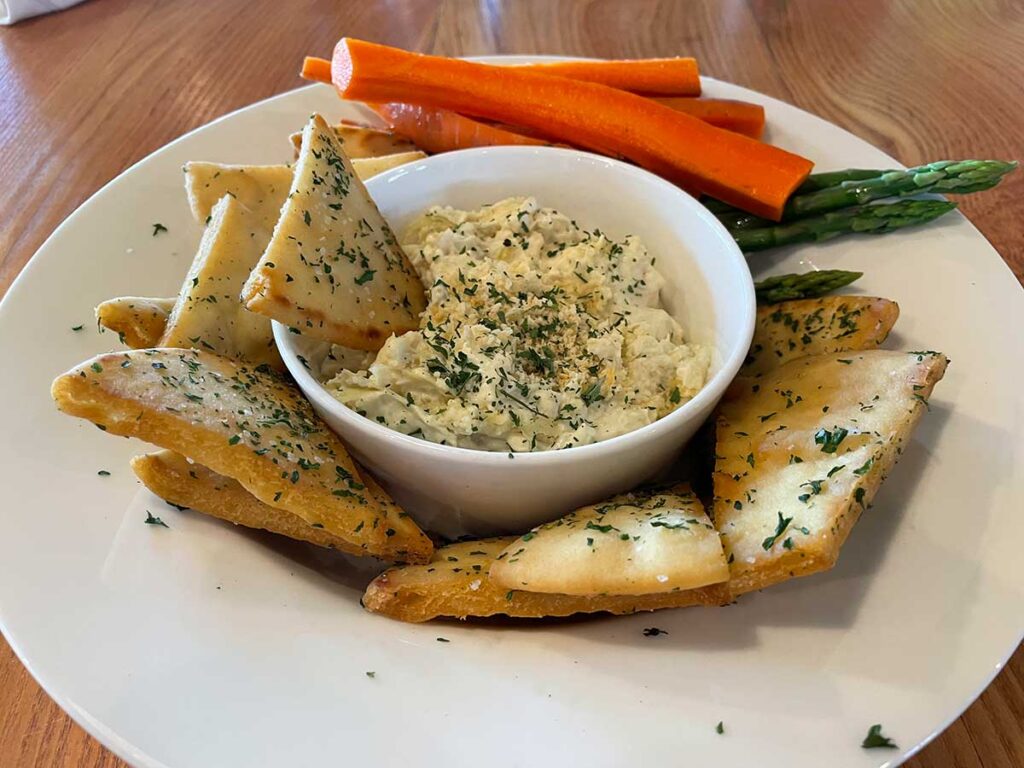 The Artichoke Feta Dip: This dish is served with artichoke hearts, feta cheese, bread crumbs, pita crisp, and seasonal raw veggies. The pita bread is fresh out of the oven — crispy along its edges and soft at its center, with a sprinkle of garlic. The dip is made of marinated artichoke and feta creme which creates a tangy, pasty flavor and makes the meal all the more filling. The carrots and asparagus are also a nice balance to counter the strong flavor of the dip. It’s a simple dish, but sometimes simple is all you need. It is a nice meal that you can share with your friends while sitting out on the patio and watching the sunset over the Erie Highlands. 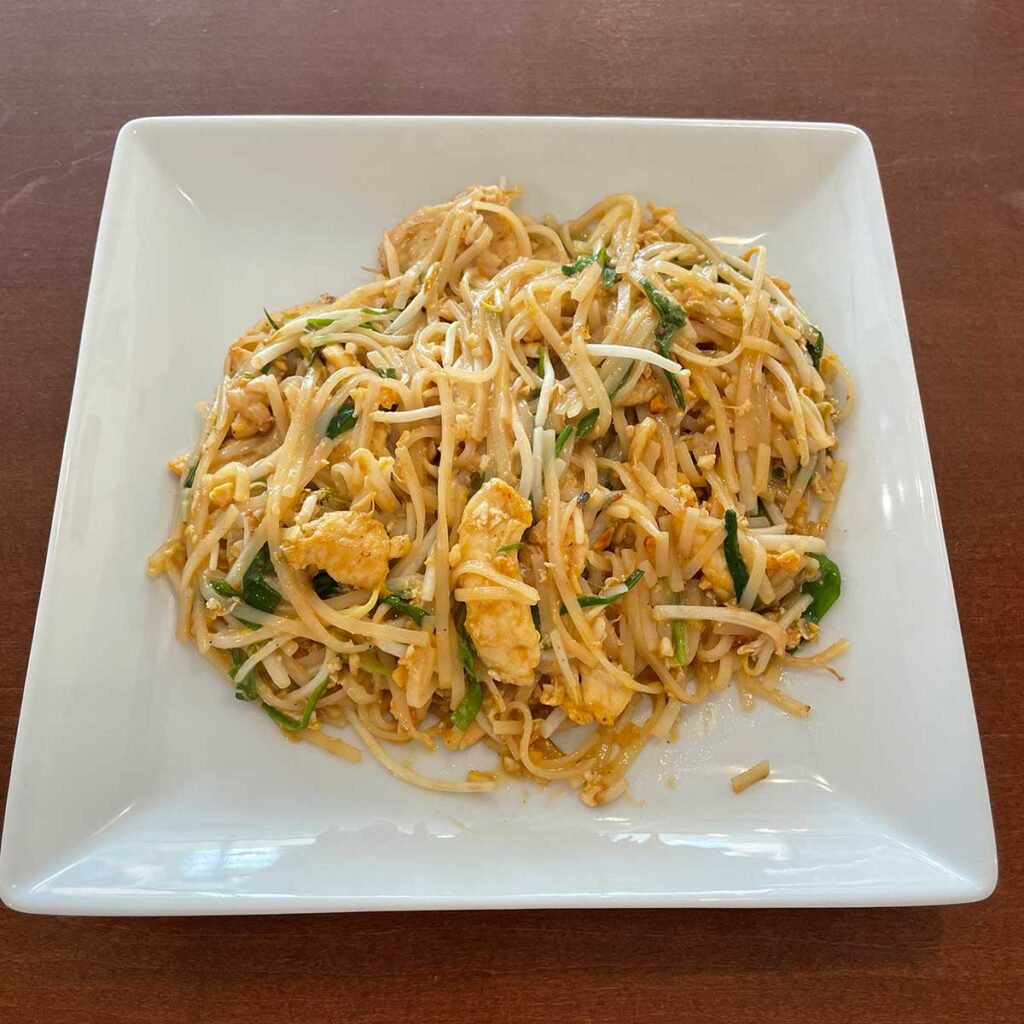 The Pad Thai: If I had an office job around the area I would definitely come here more often. The Pad Thai consists of stir-fried rice noodles with egg, green onion, bean sprouts, and ground peanuts, with the choice of chicken, pork, beef, tofu, or shrimp. You can make it as spicy as you’d like, but be careful not to go overboard. Overall, it’s a good meal to have during your lunch break or when you want to hang out with your buddies. I gladly ate the leftovers for dinner that night, so if you’re looking for a quick bite that will last you, Busaba is the place.

View all posts by Katrina Stroud →