Editor’s Note: Press Releases are provided to Yellow Scene. In an effort to keep our community informed, we publish some press releases in whole.
Updated to include a fresh Press Release submitted 10/28/2022 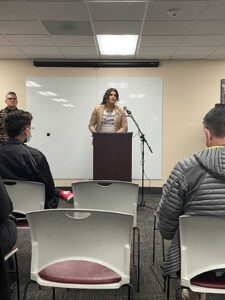 Out Boulder County – may be credited to Mardi Moore, Executive Director
“Anyone who cares about honesty and fairness needs to vote on November 8th and vote for candidates who support equality. To use transgender people as a political weapon to attempt to mislead Latino voters is disgusting and dangerous. Hundreds of hateful bills targeting transgender youth, their families, and adult transgender people have been introduced in statehouses across the county. Transgender people have disproportionately high rates of death by suicide and murder. Shame on Stephen Miller and American First Legal.”

Ruby Lopez, QTPOC Programming & Spanish Access Coordinator, Out Boulder County
“I hope Latine voters won’t fall for these lies and efforts to create discord in our families and communities. These political attacks are deeply personal to me and to other people like me. As a Latine transgender woman, I know personally the way that misinformation can lead to discrimination and violence. Transgender people are tired of being used as political punching bags and deserve better.

America First Legal continues to send mailers, text messages, and to air Spanish-language radio ads in Colorado to attempt to influence Latino voters in the upcoming election. These mailers, text, and ads include incorrect, harmful, and hateful messages about transgender people. America First Legal is led by Stephen Miller, a Trump aide.

Ruby Lopez, QTPOC Programming & Spanish Access Coordinator, Out Boulder County
“I wish Steven Miller was brave enough to come to the Equality Center of the Rocky Mountains so I could say to his face that the transgender community is not a political punching bag for him or anyone else. I would gladly show him the work we do to support LGBTQ people and communities who face discrimination and isolation because of the lies him and his America First Legal Fondation are continuing to spread for political gain. I hope that voters read these mailers and understand them for what they are – a craven attempt to mislead them and create divisions between the broader Latino community and LGBTQ Latinos.”

About Out Boulder County

Working independently and in collaboration, we facilitate connection, advocacy, education, research and programs to ensure LGBTQ  people and communities thrive in Boulder County and beyond. www.outboulder.org