A Boulder ballot measure to shift off-cycle elections to even years — on the same day as state and federal elections — has won with overwhelming support. The measure passed on the November 2022 ballot with 63% support.

Odd year elections regularly suffer from low voter turnout, a problem this measure seeks to address. “Low and uneven turnout is a serious problem for local democracy. Fortunately, one simple reform — shifting the timing of local elections so they are held on the same day as national contests — can substantially increase participation,” according to the American Political Science Review. 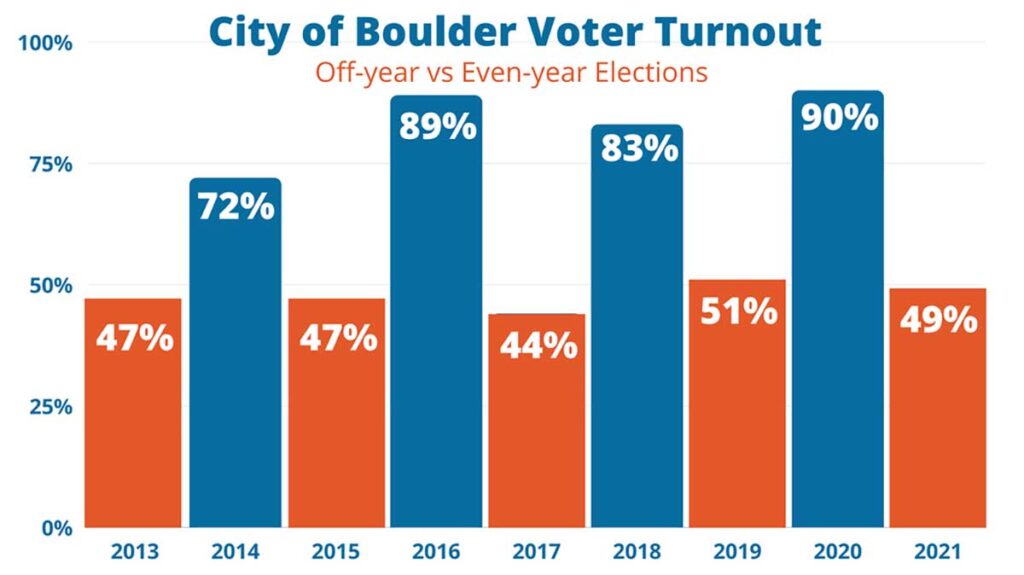 “And it’s not just how many people are left out — but who is left out. In Boulder’s off-year elections, people who are younger, people with lower incomes, and people of color have been disproportionately underrepresented.” says Chelsea Castellano, campaign co-lead.

City officials make critically important decisions that affect all of us. By aligning our local election date with state and federal elections, Boulder will significantly increase the participation and representation of the electorate that chooses our city’s leaders. Even-year elections are more representative in terms of race, ethnicity, age, & income.

Thanks to the passage of this reform, our city leaders will now be chosen by the same broader electorate that chooses our state legislators, our United States senators and representatives, and our president.

Boulder City Council has recognized that moving our elections to even years will strengthen our local democracy. Their leadership in putting this measure on the ballot and working to pass this change in Boulder will elevate the importance of local issues and candidates because more people will participate in the discussions and process.

Council Member Nicole Speer, who spearheaded placing this measure on the 2022 ballot, said “Off-cycle elections exclude and marginalize people who most need their voices heard. We now have the opportunity in Boulder to improve representation in our city leadership by moving local elections to even years.” Speer had the support to place this measure on the ballot from six out of nine of her fellow Council colleagues.

Council member Matt Benjamin was a strong advocate of passing this measure stating, “We need to empower more people to participate in local elections. We must reach further into our community to hear the concerns, wishes, and aspirations of a broader, more representative electorate.”

People for Voter Turnout, a local grassroots organization, actively campaigned to pass this measure on the November 2022 ballot in the City of Boulder. Jill Adler Grano, former City Council member and previous Community Affairs Director for Congressman Joe Neguse, served as Campaign Chair to fight for a stronger democracy. “Holding local elections in even years is the single biggest change we can make to get more people voting,” Adler Grano said.

Over the past decade there has been a movement of cities and states moving their local elections to even years in order to address the inequities that result from odd-year elections. The results of these reforms have proven to significantly increase voter participation and representation in local races.

Boulder will be the largest city in Colorado to hold municipal elections in even years. “We are beyond thrilled that Boulder voters have passed this important pro-democracy reform, and we hope that our success inspires similar action across the state.” said Castellano.

The popularity of Boulder’s even-year election measure, along with momentum from other cities and states making the change, will give the change increased weight in Colorado. “Most municipal elections and all school board elections currently take place in November of odd-numbered years. Other cities and school districts in Colorado can greatly benefit from making this relatively simple change to drastically increase voter turnout,” said Budd.

Now that the measure has passed, Boulder’s regular municipal election date will align with state and federal election dates beginning in November 2026. In order to implement the transition, the terms of the council members elected in 2023 and 2025 will be reduced to three years.

To learn more about the campaign that worked to pass this measure, visit the website at peopleforvoterturnout.com.