Because They Need It 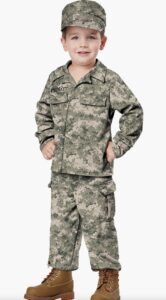 “Because they need it.” – Whitney Tilson

Tilson is a multimillionaire hedge fund manager who is a major supporter of education “reform,” particularly the Knowledge is Power Program (KIPP) chain. “Because they need it,” was Tilson’s unguarded response to a question at a seminar about KIPP’s draconian disciplinary practices. “They” referred to the poor Black children in KIPP schools.

I was reminded of Tilson’s offensively revealing comment when reading a New York Times article this week about Junior Reserve Officers’ Training Corps (JROTC). The report exposed the increasingly frequent practice of enrolling high school students in JROTC without their assent or their parents’ knowledge.

JROTC is funded by the U.S. military to the tune of $400 million annually, with increases in the works. The Pentagon denies that this is a recruitment program while simultaneously noting that 44% of recent recruits had been in JROTC programs. There are 3,500 JROTC schools nationwide and the vast majority are located in communities of color or poor rural communities.

JROTC programs have more than tripled since the 1970s, a time when backlash to the Vietnam War was hampering military recruitment and the military draft had ended.

The military claims that the program is “. . . designed to teach leadership skills, discipline and civic values — and open students’ eyes to the idea of a military career. “

It must be noted that the program’s name is intentionally misleading. ROTC is a means of direct commission into Officer ranks. JROTC is nothing of the sort. Completion of 3 years of JROTC “earns” the student enlistment at the rank of Private E-2, a status I and others achieved after 8 weeks of Basic Training in 1966. Like the draft in the 1960s and early 70s, JROTC is about indoctrinating young folks to serve as front line ground troop fodder, not military leaders.

That these programs are concentrated in communities of color is ostensibly “because they need it.” It bears noting that Whitney Tilson’s children didn’t “need it,” as graduates of an expensive Manhattan private school where KIPP’s tough love or JROTC’s strict rules would not be tolerated.

Unsurprisingly, critics have pointed out that JROTC curricula are of the Ron DeSantis variety, where leftist notions about race and sexual identity are verboten. It is troublingly ironic that Black youths are forced into a program that offers a whitewashed version of history as they are prepared to serve and protect the nation that perpetuates the systemic racism that forced them into the program in the first place!

Programs like KIPP and JROTC represent a dismal and often racist notion of discipline and civic virtue. The carrots and sticks of KIPP and JROTC fundamentally violate the principles of human learning and development. They are training, not education. They blunt critical capacity, not nourish it. They disallow questions and demand unquestioning compliance. They prohibit unconformity and demand complete conformity.

While JROTC and KIPP schools are especially striking examples, similar misguided ideas of learning and education are increasingly dominant. Charter schools and many traditional public schools are generally “highly structured,” focused on discipline and compliance, often – or usually – requiring uniforms and designed with standard curricula and a “teacher as instructor” model where students are expected to passively absorb information.

The ascendant model of education is one where students pledge unconditional fealty to a republic and its implicit religion without any opportunity to interrogate its meaning, purpose or true history. The republic “for which it stands” is feverishly supported by so-called patriots who have little to no knowledge of the complex system that has somehow survived despite ignorance. The ignorance has spread like slime into elected bodies, including the United States Senate and House of Representatives, perhaps well on its way to becoming the House of Reprehensibles, at least on one side of the listing ship of state.

As an educational and political progressive, I am occasionally accused of not “loving” my country. That’s true I suppose, because loving a country is more dangerous than romantic. I do, however, admire and deeply respect the ideals to which we aspire, despite the halting progress or, in recent years, the disturbing backsliding.

The hope for the future of the United States does not reside within military indoctrination, strict training for Black kids “because they need it” or pledges and patriotic songs mouthed by kids who don’t know what they mean. Those things are the stuff of authoritarianism and fascism, not a democratic republic.

Schools should be places where children are supported while learning about their own identity; racial, sexual and philosophical. They should be free to exhibit these things in their clothing, hair color or style, and creative expression. They should be practicing democracy, not chanting meaningless slogans. They should not be judged and strictly disciplined. They should be recognized and loved for who they really are.

Because they need it. We all need it.