Another man has died at the hands of police. His name is Keenan Anderson. He was a 31-year-old high school teacher in Los Angeles, California. He was in a minor traffic accident when he was tased to death by the LAPD.

Based on the police video released, Keenan Anderson was experiencing a mental health crisis. He appeared paranoid and panicked, but he was NOT violent.

Instead of practicing de-escalation, LAPD’s violent response only increased his state. Yet he was still not violent. He was in a state of panic. By all appearances, he was having a mental health crisis, a situation that all too often the police are responding to with unnecessary violence, as they did when they killed Christian Glass in 2022.

Had a mental health unit been deployed, Keenan Anderson would most likely be in a hospital bed right now getting mental health treatment instead of at the coroner trying to figure out the “cause of death.”

Criticism of police having only one tool in their bag is warranted. Everything is NOT a nail. 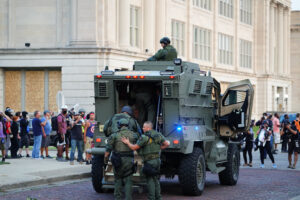 Police Violence has been there decade after decade, century after century. The difference now is they have a lot more artillery. Now, they have been been “warriorized”.

My Role As A Straight White Man Wanting to Support the Black Lives Matter Movement was submitted to Yellow Scene Magazine, by Charles Dalton-Telschow, in 2020. 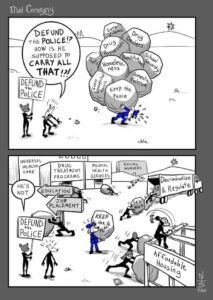 Charles writes, “Straight, young, white men like me have had a very loud voice for a very long time, and the ultimate takeaway I have from the Black Lives Matter (BLM) protests over the past week is that, at this moment, it is time for us, (the white people) to not shut up and stand down, but to sit at the table with everybody, and change what we have historically been saying. Advocate for the defunding of the police, tell them your interest for protection from police has changed.  We no longer agree with the historical and modern form of policing in American that was designed solely to protect our interest in white superiority.”

Accepting progress as good enough is a state of privilege that can not be afforded. There are more than enough laws on the books. Asking police to stop killing people is reasonable, the police asking us to believe all killings are warranted is not.