The sound is felt before it’s heard; a low rumbling that shakes the earth and tremors through the bones. Then the noise stirs the air and assaults the ears, a vibrating growl that morphs into a roaring cacophony. The Colorado National Speedway is open for business.

I’d come to the speedway to experience the heat and noise of old-time car racing, hoping to get a taste of some beer-soaked culture. The speedway isn’t Indy’s hallowed Brickyard. Nor is it the winding high stakes game of Formula One. Rather, a trip to the Dacono track is a historical time warp; one that hearkens back to a day when local raceways were commonplace and muscle cars ruled the road.

The lines at the ticket window move quickly, you can feel the excitement as the fans file into the modest stadium where the racing was already underway. The sounds of engines running fast and hot were proof of that, so I grab my ticket and hurry inside.

The speedway welcomed its first visitors in 1965. The 3/8-mile oval track hosts a variety of divisions. Everything from Late Model Stock Cars stuffed with V-8 engines (the little brothers of modern NASCAR vehicles) to Pro Trucks (a lot faster than your brother’s Dodge), to Legends Cars (5/8 scale replicas of the NASCAR cars driven by the early heroes of the sport and powered by 1200 cc motorcycle engines). There are also plenty of oddball events featuring trains and school buses.

They are not as weird as you think.

While races featuring the Legends Cars or Late Model Stock vehicles get the crowd’s pulse racing, it’s hard to argue that the oddball competitions aren’t more popular than the serious stuff. Trains, for example, feature three cars chained together with two drivers. The first car has an engine, the second is empty and the third is the only vehicle with brakes. They race in a figure eight track configuration. Mayhem isn’t just expected, it’s guaranteed—and the crowd longs for it.

The school buses also forgo the speedway’s oval to race in eights, which makes a wild spectacle that’ll have you second guessing sending your child off to class with that wild-eyed bus driver once summer vacation is over.

Of course, prior to my visit, I was naïve to all of these joys. But once I walked through the entrance gates, past the hot dog stands and beer vendors, my education started quickly.

Racing has been around since the first cars made their appearance. The first recorded race was held in France in 1894, and was a test of reliability. But the focus soon changed to speed. Frank Duryea is credited with winning the first U.S. race in 1895, a Chicago event that, like many other early competitions, was a point-to-point contest covering more than 50 miles.

As automobile technology was refined over the subsequent decades, car racing exploded, with myriad courses (including the advent of oval tracks, such as the Colorado National Speedway) and types of vehicles. Today, enthusiastic fans can soak up the smoke and noise of drag racing, the hairball courses of point-to-point rally driving, the technology-fueled action of Formula One and the off-road madness of races like the Dakar Rally. The latter being a multi-day endurance race open to professionals and amateurs alike.

Now hundreds, if not thousands, of tracks are scattered across the nation. A quick review of Speedways Online, shows there are 15 in Colorado alone. They range from Mosca’ Alamosa Motor Speedway, a 3/8-mile dirt oval, to the Julesburg Drag strip, a quarter-mile strip of speed and adrenaline. And Colorado pales in comparison to the rest of the country. Alabama, California and Iowa feature dozens of venues. There are even racetracks in Hawaii and Alaska.

But all of this rich history means very little to the guys at the starting line in front of me as I take my seat. It’s a Legends race and the engines roar as the green flag waves. These drivers aren’t concerned with history. They want to win.

The Legend cars are fast. Very fast. They eat up the oval with sickening speed. It becomes hard to keep track of who’s in front, who’s been passed and who’s been lapped. Neophyte that I am, I struggle to keep up with the action, but finally give up and take in the crowd. There are plenty of tattoos and beer bellies. But there are a lot of kids, too. In fact, the venue is packed with families. Beer clutched in my sweaty palms and the sound of engines raging in my ears, I’m a bit shocked.

Stereotypes had me expecting a rowdy drunken scene, but I’m surrounded by some of the most polite children I’ve ever met. Everyone is so nice in fact, that I’m actually a little overwhelmed, so I split the general admission stands to go check out the pits.

Pit row at the Colorado National Speedway also surprises me. I’d imagined something from Indy. Or maybe one of the big NASCAR events. But the races are so short here that competitors don’t stop during events. Have a mechanical issue or run out of gas, and you’re out of the race. The pits are in a long row, at the far side of the raceway, hidden behind aging wooden bleachers. Cars, tools, crews are scattered about as drivers wander around while their vehicles are prepped for the next race. In the pits, it becomes apparent why there are so many families in the stands. It seems that the actual racing is a family affair, too. 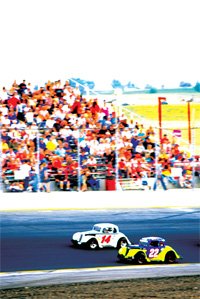 Everywhere in the pits there are kids, more than I can count. And some of them—barely old enough to hold a legal driver’s license—are walking around in the one-piece leather race suits that clearly identify them as competitors.

The stands next to the pit area are empty, so I hunker down to watch some more racing. In this heat, the track is full of Modified Coups, small cars that are dwarfed by massive spoilers attached to their roofs. The coups howl around the oval as the sun starts to set over the stands, painting everything rose.

I move up to the highest level to catch a better view of the cars, the mountains and the speedway. A light breeze caresses my cheeks and the scene—despite the noise and exhaust—feels almost peaceful, the metronomic circling of the race cars meditative, the sun warm and the faint noise of the crowd drifting across the infield. Behind me generators hum, and tools clank as the crews in the pits work on their cars.

It’s beautiful and surreal and I feel at peace, a kid myself again, at home in an adult playpen of cars, gasoline, oil and asphalt.