It Takes Technology to Track Down Legends 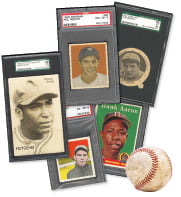 I’ve hung out with Mark Tylicki a few times. We have some close friends in common so we turn up at some of the same social gatherings. I knew Mark was somewhere in the tech sector for a living, and seemed like a nice enough guy. His wife is a doll.

What I didn’t know was that he is also my hero. Mark is known on the Internet as the owner of Denver-based RustyWilly Collectibles, a sports card collection impressive enough to melt grown men into school-aged kids in seconds.

I discovered this fact after chatting with him as the Rockies continued their downward spiral in Game 3 of the World Series.
“Check this out,” he said, as he slowly pulled what appeared to be a flat Lucite sleeve out of his pocket. Safely encased in the clear package was an ancient, faded baseball card with a picture of a black man named Jose Mendez. Mendez was called “El Diamante Negro.” The card was from the Cuban Negro League in the early 1920s. “I just dropped about $2,500 on this card. It’s more rare than the Honus Wagner,” Mark said.

To most of the world, the Honus Wagner is the holy grail of card collecting. The card was the first to break the million-dollar barrier and only 50 or so exist. “There’s only maybe 10 of these,” Mark says. “Those Cuban Negro leaguers are the forgotten guys but were more important for baseball than anyone will ever realize.”

RustyWilly.com is a treasure trove of gems like this. The true treasure, however, is his Hall Of Fame Portrait collection. He has almost every single Baseball Hall of Famer. Not all of them are cards. He has an ice cream lid of Joe Medwick, leftfielder from the St. Louis Cardinals from 1937.

He’s very particular about how he amassed this collection. “They’re all head and shoulders images. Portraits. And of the 250 some-odd hall of famers, I’ve probably got 220 different issues.”

Mark explains that many different companies released their own issues of baseball cards and collectibles to increase interest in their products. Gum, tobacco, ice cream, you name it. The pride of his collection is a 1946-47 Martin DiHigo Fotos postcard from when DiHigo played in the Mexican League.

“You see that little piece of newspaper under his neck pasted on the picture?” he says, referencing a torn, yellowed chunk of newsprint. “That said ‘El Inmortal Lanzador.’ It’s Spanish for ‘The Immortal Pitcher.’ It was part of a newspaper clipping someone had glued onto this card.”

There are only three of these cards known to exist. “These things just didn’t survive well, with the climate and the moisture down there.” And then, of course, there’s the embargo with Cuba—Mark won’t say, in fact, how he came to be in possession of such a rarity.

From the 1925 Drake’s Cake Babe Ruth to the American Beauty Cigarettes Ty Cobb from 1910, Mark has them all. He tells a story about each one.

Check it out. It’s a great place to find that rare, perfect gift for the hard-to-shop-for sports fan in your life.