Why Buy Ice Cream?
Summer is magic for a child. School’s out, the world is alive with all kinds of creatures, the days are long, the nights are warm and the neighborhood pool beckons. From the smell of sunscreen and lighter fluid to the chimes of the ice cream truck, there’s no shortage of amusement for a child in the summer. Take a few moments to experience it together and learn a new skill (and, not have to fork over any more cash to that ice cream guy with his creepy white hat). Learn how to Make Your Own Ice Cream. Admission includes supplies. Dairy Queen Franchise Agreement not included. [July 25 at 2:30 p.m., Bob L. Burger Recreation Center, Lafayette, $15, 303.665.0469]

An Easy Checklist
Ever seen local trumpet whiz Bob Montgomery trade solos with himself (trumpet in one hand and a flugelhorn in the other)? Have you had the chance to truly appreciate the Queen City Jazz Band’s commitment to traditional and Dixie styles? For that matter, have you spent any time enjoying the picturesque beauty of Roosevelt Park? Well, now you can do all of the above at the Longmont Jazz Fest. Bring your own chair. [July 18-20, Roosevelt Park, Longmont, free, www.longmontjazz.org]

10,000 Wayniacs
It’s hard to gauge exactly when Wayne Newton became a cliché, but we’re pretty sure it was in the early ’80s, when he became a “Vegas” act. It wasn’t until he appeared in the National Lampoon disaster Vegas Vacation that his clichéd status entered the national consciousness. It’s been long enough for Mr. Las Vegas to have become a playwright’s inspiration—thus the production 10,000 Wayniacs: Very Short Plays Inspired by Mr. Las Vegas. [July 17-20, Mary Miller Theater, Lafayette, $7, 720.209.2154] 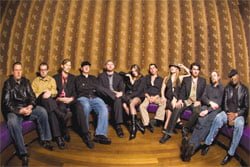 The Novelty of a Dozen Musicians
As gas prices climb, bands like Funkiphino are going to become even more of a disappearing art. That’s because there’s a dozen players on stage boasting a full horn section and blowing through classics by artists ranging from Michael Jackson to Tower of Power to their own groovalicious compositions—seriously well-developed arrangements that sound good enough to be off of the Stax session. So, get out to see ’em while you can at the Erie Concerts in the Park Series. [July 12 at 5 p.m., Coal Creek Park, Erie, free, 303.926.2700]