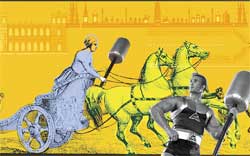 It’s a safe bet that when the school bells ring this month, every student in Tony Tolbert’s class will show up on time, sit down and behave. What else is there to do, when your high school science teacher is a hulk like superman, who can handle the freakish beasts of American Gladiators and still have time to dissect a frog? Who cares that Tolbert was a cheerleader in his younger days? Now the dude is cut and able to smash heads alongside of Hulk Hogan. Tolbert more than held his own during a June airing of the reality game show. He came from behind to beat out a so-called “football player” in the competition. “Outstanding!” Tolbert exclaimed to Hulk Hogan after the teacher vanquished his rival. The 37-year-old father of three crushed more than 1,000 Boulder-area challengers who sought a shot at making the show in February. Tolbert wowed the show’s producers with his physical skills, and then told them he was special, because “I’m Tony Tolbert.” Tolbert won his opening round but was eliminated shortly after. We are guessing his students will still be in awe.