The Best Mix Tape Ever 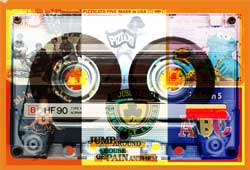 Heading back to school was always tough for me. No surprise, I’m sure it was that way for most kids. Three long months of endless days and warm nights sure made the dungeons of school days loom ominously in September. So, as my gift to your children, dear reader, I have created the ultimate Back-to-School mix. Simply log on and listen to these carefully handpicked tracks, guaranteed to bring more smiles to parents and kids alike than all the new Trapper Keepers money can buy. Don’t say I never gave ya nothin’…

1. ABC
The Jackson 5
Remember when Michael Jackson was black? And male? And awesome? Yeah, we do too, and this simple schoolyard rhyme knocked the Beatles out of the number one spot on the charts in 1970. If only we could freeze time.

2. We Gotta Get Outta This Place
The Animals
Granted, this 1965 hit, originally penned by Barry Mann and Cynthia Weil was a Vietnam-era anthem. But you can bet it applies fairly neatly to today’s Iraq…just as much as it does to a 7th grade study hall.

3. Jump Around
House of Pain
From the awesome Harlem Shuffle sampled horn line intro to the infectious two-word chorus, this track reminds everyone, whether they be drunken Irish rappers or 8-year-old school children that sometimes, you just gotta jump.

4. Fight for Your Right
The Beastie Boys
Has it really been 22 years since everyone everywhere was chanting the chorus to this Beastie Boys breakout hit? Although the NYC trio meant the tune to mock the party lifestyle (I’m almost positive they were talking to another, all-Jewish group, although that one dressed up like demons and cats and spacemen), none of us got the joke, and instead tipped back our 40s of OE to this one for the last years of the Reagan era.

5. Tones of Home
Blind Melon
We interviewed Christopher Thorn several months ago, and he acknowledged that no one in the band knew just how powerful these refrains would be upon the ears of ’90s youth: “What do you think they would say/If I stood up and I walked away/Nobody here really understands me…” There isn’t a kid in history who hasn’t felt that way at least once…and yet this tune is so upbeat you can’t help but feel uplifted after listening to it.

8. Run Around
Blues Traveler
Granted, we’ve all heard this one 734 times too many. But between all the literary references (Poe, the bible, famous dead rock stars, et al.), bouncy riffs and unforgettable meter, this song is unfailingly etched into the minds of anyone who listened to the radio in 1994… or ’95… or ’96… And your kids will love it just as much as you did.

9. Super Mario Brothers Theme
Mr. Bungle
Now that Grand Theft Auto has turned video game soundtracks into coveted musical compilations, the beep-beep of the good ’ol 8-bit days may be far behind us. But one theme will live on long after we’re all dead, and Koji Kondo is the man who wrote it, heralding the 1985 release of the greatest selling video game in history… but Mr. Bungle totally makes it rawk.

10. Joy to the World
Three Dog Night
I don’t know Jeremiah, and I’ve never hung out with any bullfrogs, and certainly, if one started offering me wine, I doubt I’d drink it, because I’ve likely already had more than enough for the evening. Still, Three Dog Night’s send up of this Hoyt Axton spiritual makes your soul literally want to jump out of your body and do a jig.

11. Superficial Superman
The Pozers
You’ve likely never heard of this Dallas-based powerpop outfit, but this fuzzy, awesome tune off of their 2006 outing, “Embrace your Addiction” is instantly hooky and hypnotic, like Weezer, except even more poppy. Not that that’s a bad thing. At least, it isn’t here.

12. Waiting for the Weekend
The Vapors
Sure, most folks will remember this New Wave-era powerpop outfit for its 1980 hit, “Turning Japanese,” but this tune is far more prophetic to a kid waiting for the bus at the corner of Cold avenue and Monday Street… especially if his summertime girlfriend goes to another school.