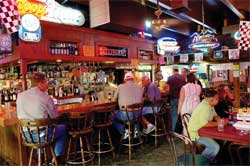 It was a dreary Tuesday evening, and I had just finished a longer than usual nine-hour day working with kids. I wanted nothing more than to sit down on my comfy sofa, drink a beer and zone out. A friend invited me to head out and join him and a couple of other friends nearby in Boulder. As I put my feet up on the ottoman, I erased his voicemail message and declared the day done.

My lady, realizing that we had no food in the fridge and recognizing my lack of motivation to remedy that problem, suggested we go out for a bite and a drink.

“I really don’t want to deal with people,” I groaned.

“C’mon, let’s go try Dillinger’s. We haven’t been there in a while,” she urged. “Not to mention, don’t you have to get started on your nightlife column soon?”

She was right, as usual. We had been to Dillinger’s a few years ago. I remember it being a smoky dive offering food, interesting people and a relaxing atmosphere.

Since I didn’t want to worry about changing out of my dirty work clothes or messing with my hair. And considering that you can’t smoke inside anymore, Dillinger’s, that cozy, hole-in-the-strip mall joint on South Boulder Road in Lafayette, seemed like the perfect place.

In the few years since my last visit, little has changed, except where smoking is allowed (a small, outdoor smoking patio to the side, right next to an indoor patio).

The crowd at Dillinger’s is decidedly more, um, mature than you find at your average watering hole, with matted gray hair being standard. That’s assuming you frequent Boulder bars like myself.

Perhaps with age comes grace—Dillinger’s guests are friendly, making it feel like we were a part of an impromptu neighborhood get-together.

The beer menu is a little limited with six beers on tap, but I was in a pretty standard Budweiser kind of mood anyway. To be frank, Dillinger’s is a dive bar, but the taps are clean and pints are cold.

The bartenders also pour a pretty good whiskey and cola, which paired well with the surprisingly good bar food. As we perused the eclectic menu, I thought about all of the other places where one could order fried zucchini, a Tombstone pizza, fajitas or a Ruben. I came up with nothing.

I’m not sure where else you could find such colorful conversation, either. Or flavor. The table next to us spent a good 15 minutes trying to remember the McDonald’s Big Mac song.

We enjoyed our food and the neighboring tables’ conversation out on the patio, with the epic view of the parking lot and adjacent office building, before going inside for another drink. The pool tables were full—this is the local place to head to if you’re looking for a game of 8-ball. The jukebox was spinning the usual classic rock fare, and I dared myself to drop $1 on a Depeche Mode or Pet Shop Boys tune, just to gauge the reaction. No dice, those weren’t even on there.

I wasn’t about to hold that against Dillinger’s. For me, the true test of a bar comes when I push the bartender to make a Black Bart (half Guinness and cola). It’s generally met with a wince, followed by a groan after a mess from pouring it ensues. Not the case here; the bartender nailed it.

As I polished off my Bart and cashed out, a band began setting up. Dillinger’s is not light on entertainment between its live music, karaoke, Texas Hold ’em Tournaments and mini-NASCAR races. That is if you tire of the atmosphere created by buzzed patrons trying to nail the Big Mac song.