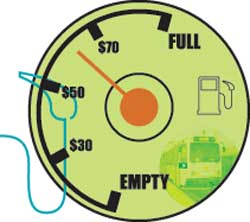 It’s painful, not to mention infuriating, to pay more than $4 a gallon for gas. And with no end to the madness in sight, the best fix for this robbery at nozzle-point is to jack the price up at least another 10 cents. Or even better, 25 cents a gallon.

Whiskey Tango Foxtrot?!? you say. That talk reeks of madness and it certainly won’t win any elections. But boosting the gas tax would have some seriously positive consequences.

About 25 years ago, the suggestion of imposing a 25-cent-a-gallon national tax on gas that was just pushing above $1 per gallon was met with howls and screeches. Opponents said such a tax would bankrupt farmers and cripple the lower and middle classes who couldn’t afford it.

Such a revenue stream would have generated tens of billions of dollars annually that could have been used to keep our highways and bridges in good shape while helping pay for transit systems both within and between cities across the country. Oh, and a couple of those billions could have gone to pay for research into alternative fuels. Imagine where we would be on that front today had a concerted effort begun
in 1980.

But because congress lacks the political spine, not to mention foresightedness, to jump that shark, Colorado needs to do it. A measly 20-cents-a-gallon (except for diesel) would raise more than $400 million a year, according to AAA numbers for gasoline consumption in 2006. And really, opponents can’t say with a straight face that an extra $3 on top of the $60 it takes to fill a 15-gallon tank today is going to make them bankrupt or cause them to miss a meal, or a latte at Starbucks for that matter.

And the good it could do is astounding, especially when it comes to transit. The metro area’s Regional Transportation District could afford to expand its routes and frequency of trips, instead of cutting them as they are considering now (and forcing people to stand for most of the 45-minute commute). That gives people a convenient and inexpensive alternative to driving.

A gas tax won’t do all the fixing needed to get our transit system to where it needs to be. So in addition to the gas tax, bus and light rail fares should be reviewed every six months and adjusted accordingly. Of course, there would be discounts for the usual students, disabled and elderly, but knowing that I can get to downtown Denver and back for the price of two gallons of gas is a huge deal regardless. Moreover, it would prompt people to buy ticket packets early at lower prices and renew EcoPasses to avoid paying more, thereby giving RTD a boost in upfront capital.

The bottom line is that people need to understand that government is not all bad and wasteful. Government—not the private sector—is what is going to help ease the financial shin-kicking we’re getting over gasoline. And the way forward is to raise gas taxes. Because when it comes to important things that matter—schools, police and fire protection, and yes, a robust transit system—taxes help pay for those things government provides best.

Oh, and all you Escalade drivers out there who will whine that you don’t ride the bus and shouldn’t have to pay to subsidize it, think on this: When was the last time you called the fire department? Never? But you take comfort in the fact that you pay to make sure they are there just in case. The same goes for our transit system. You may not use it, but having it there makes your air better, reduces traffic and enables people to continue working at jobs that need doing but that now or in the future won’t come close to paying enough to cover the cost of gas.

And if you think private enterprise should be left to sort all this out, ask yourself: When was the last time that the big oil companies—who in the first three months of this year reported $9 billion profits—offered you an alternative way to get to work that didn’t cost you a week’s pay?