Trump’s America in the Bubble

(Following the publication of this article KGNU (88.5 here in Boulder County) reached out to us and asked us to talk about the experience. Here is a link to the interview with us both:

We have been doing a series all year of Legendary People in Legendary Locations and they have been fabulous!

Over the years, Yellow Scene Magazine has worked hard to cover our community and provide a voice for all members. We have highlighted the LGBQT community, issues and challenges POC face, Addiction, Mental Health, Homelessness, Education, and the need for Criminal Justice reform.

However, because Boulder County is 90.5% White (alone, percent, according to census.gov estimates for July 2018, Wikipedia lists it at 88.4%), the vast majority of the businesses we cover are white. We are proud of our community’s accomplishments and continue to cover both our business community and the important issues that affect us most – regardless of who or what it is.

Our beautiful series in 2018 showed us how we still have a ways to go in representation of the minority community, leading us to make the decision to do more this year to highlight less visible members of our community.

Our editor, who is Native American, put some posts out in the social media community pages asking for business people, activists, members of the community who would fit the profile.
(Update March 11, 2019: It looks like some days the post is avaiable and some days it is not. In case this is a day it is hidden, screen shots can be found HERE.)

“Hey folks. We’re making a list, checking it twice, because we want to be ready to bring the important stuff to your Yellow Scene pages this next year. Let me know in the comments which businesses in our communities are owned by people of color, LGBT folk, and persons that are differently-abled – also, who are the most need-to-know activists in Boulder County. Ok, go…”

Trump’s America is alive and well even here in the Boulder Bubble (which truly does extend to I-25 these days). What we did not expect was the onslaught of negative feedback for choosing to highlight the area’s minority population, specifically from a subsect of the normally tolerant Erie.

In Erie there is a group called the “No Snowflakes Zone”, and in this group they tell jokes about marginalized people of the community. I was kicked out for objecting to a rape joke (which I was told was not a rape joke in spite of the “joke” being about rape). Our editor’s attempt to join the group wasn’t even allowed.

After putting up the post up in the general Erie page, we were assaulted with questions asking why we would feature minorities and choose to discriminate against white men.  The first question asked, why we “felt the need to single people out based on their color of skin or gender affiliation?”.

The answer I gave: “Gentleman, how disappointing the only page we have posted this to that has given us grief for wanting to highlight minority owned businesses is the Erie Page. The question isn’t why we want to do this, but why you care.”

I thought this helped explain it, apparently it did not. The post then had about 8-10 people work very hard to tear down not just the idea, but the magazine, and our characters as well.

“My point is that you came to this board looking for input on specific demographics of business owners. It appears to me your “inclusive” list excluded a much larger group. I understand your intent but just wonder why it’s important for you to need to focus on the groups you mentioned.” Same person: “Maybe they should highlight on “reverse discrimination”

“Does an Italian count as a person of color. And is it ok that I support trump and am pro life and am pro second amendment also. I live in Lafayette so I am definitely in Boulder County.”

“Yellow Scene should do a Thunderdome article on which identity is the most oppressed and victimized. As my friend Brad says, “When all the easy “oppressors” have been rhetorically rubbed out, the Woke turn on each other. Therefore you can never, ever be quite Woke enough. Because some other person with greater intersectionality is going to rhetorically stomp your face into the mud. For being intrinsically wrong. Simply because you exist, and do not have the intersectional bona fides to defend yourself. Two Wokes enter. One Woke leaves. Oh but you are going to report on it. You’re going to choose the most victimized and oppressed marginalized people you can find, and make sure you include their struggles (whether or not they’re fake doesn’t matter, does it?) It would be way more fun to do a Thunderdome between your oppressed types. A fun scorecard, so the readers can see who checks the most oppressed boxes. I have a Bingo!”

“I think it’s great to feature everyone. Why can’t you feature minority groups without causing division? There is a tactful way to do this.”

This one perplexed me since the sheer mention of covering minority groups caused division.

“At no point did Martin Luther King wish that his children be identified by the color of their skin. But that is exactly what identity politics has become, and it’s poison. Today at Harvard black students are demanding separate dorms, separate graduation ceremonies, and separate cafeterias based on their skin color. Segregation is evil. Identity politics is evil. Am I “aggrieved” at today’s liberal focus on identity politics? Yes, because it’s wrong. Go to a business because it’s a good business, not because of the owner’s skin color.”

And of course there were countless posts telling us we are trash, etc.

“Remind me to throw away the Yellow Scene issue this is BS media making racism and segregation a thing!!!! So done with this type of crap”

“Done with YS after this bs.”

“ROFL not from this magazine, it is infected with a mental sickness…
As this magazine plays the victim roll it also infects the week (sic) minded to believe in nothing but a distraction from what is really going on in the world. Go play the victim on your own time stop trying to convince people your view is the only view. When you try and shame people you are the problem in today’s PC world. #nomorevictimstates #nomorelies #stopfeedingthehate.” Same commenter: “It is a hate magazine, that is all it is. it likes to hide behind things but also stir up the ill in a frenzy. This is the tactic on the mentally ill.”

When asked why highlighting under represented members of our community was a problem here are some of the reasons given:

“Because you are choosing one business over another because of things people cannot control. Race, religion, disability that is wrong period.”

“Answer the question. I don’t live in Boulder because it’s insanely expensive. If someone is living in the area of Boulder, I have a hard time believing a business needs to be highlighted. Now, if you highlighted a business who was supporting kids getting ahead….ok. It just sounds like someone trying to drum up racial divides among people living in higher scale areas? please give me anything….are minorities struggling in Boulder? I don’t notice a minority group, I only notice humans. I am woke!”

“The fact that you want to highlight minority’s is just your way of saying we are all not equal. You are creating racism when we are trying to just be part of the human race. I don’t care where I do business but prefer small town and I sure as hell don’t care about their race religion or beliefs!”

There were a couple local residents of color that told our upset fanbase that it is insulting to use the term “color blind” and posted the article ‘”I Don’t See Color” Then You Don’t See Me!’ by Sam Louie—only to be told that they were wrong.

While this kind of dialogue is heart-breaking at best, it is telling as to how some Trump supporters* see themselves. It’s not their fault that they responded to an innocent question with such anger. It’s our fault for asking them. These responses demonstrate the fear that has taken hold of some of his followers.

In white America, in white Boulder County, (and yes, the Weld portion of Erie is part of that), the topic of race is one that must be had and this exchange on social media demonstrates exactly why.

While POC are disportionately charged and sentenced by our justice system, just bringing up the discussion to cover underrepresented people in our community set off a storm that I was not expecting. These Snowflake members expressed they believe they are being discriminated against by our choosing to highlight minorities this year. While I did not enjoy being attacked, I recognize that POC face this kind of dialogue everyday and in person. How many stories have we seen where white people are calling the police on black people for everyday actions?

YS started in late 2000. 18+ years ago we had to make a decision what kind of publication we would be. We had published a letter to the editor from a community member which got former Erie Mayor, Vic Smith, and one other person in the community calling our advertisers to tell them we printed one sided stories regarding the election. I made the decision we would not be bullied by political players to meet their personal agenda. While their goal was to harm the publication, it did not. It actually increased readership.

In 2001 we chose to publicly come out against the Iraq War which got us hate mail and hate calls. We were told we would go out of business for criticizing the war.

In 2012 we featured a gay man in our Singles in the Suburbs annual feature. Colorado Christian University cancelled their advertising because of this.

In 2014 we went to Ferguson to cover the Michael Brown protests. We lost one advertiser due to this as he stated “those people are the criminals”.

The topic of discrimination is one that is very difficult for some. It is shameful to recognize our own inherent biases that have been passed down through generations. Jim Crow laws only ended a short time ago. Noone wants to believe they might possibly struggle with racism or discrimination. But the truth is-we all do. Being white does in fact come with privileges that we are often too blissfully unaware of. To talk about race issues is not discrimination or “reverse racism”, but rather a fact looking at the 527 years (since Columbus landed and began the worst genocide in history), the 398 years since the Plymouth Rock landing, and the 327 years of how the United States has been for minorities.

Rather than being mad or ashamed by our country’s history, perhaps it is the kinder person who can recognize this and do the work to change it.

And yes, talking about it is a first step.

In 2019, YS will be saluting the diversity that does live in this very homogenized place and will not accept being bullied into silence.

*Update: We have been corrected; not everyone who objected to the post is a Trump supporter.

Since this article published, we have now received a Yelp review from one of the posters on the Facebook post. In addition we have had posts about us to break our window and have been named the Brown Scene by some of the same people on the post. 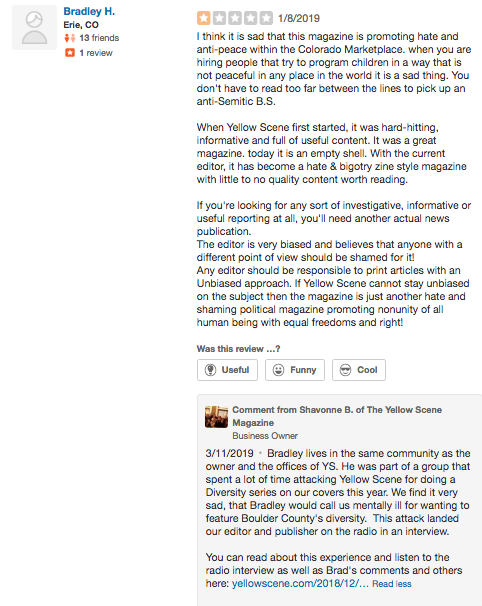 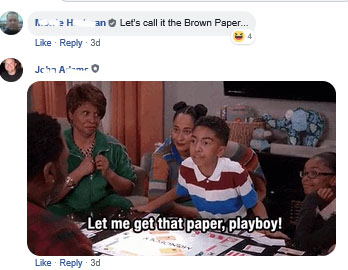