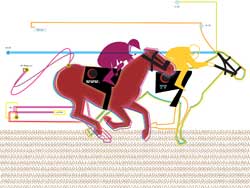 I probably shouldn’t have said anything. It was what, just a month or two ago, when I gave local cable provider Comcast kudos for the way they were handling certain aspects of their formidable high-speed Internet business. Namely, their conservative approach to an agreement reached between the New York District Attorney’s office and several other cable providers regarding the hunt for child pornography distributors. It was a lot of lip service between the two factions with little substance to merit all the hoopla (indeed, Comcast has since joined the agreement with Andrew Cuomo’s office).

Well, I guess it turns out one of the reasons Comcast didn’t care to get involved might just have simply been that they were too busy figuring out how to stymie your Internet connection speed. You know, that “blazing fast” cable modem hookup you’re paying almost $50 a month for?

Early last month, the FCC slapped Comcast in the mouth with a directive to stop its “traffic-shaping” activities. It’s the first real official action of a governmental agency regarding the discussion of Net Neutrality.

To recap, the argument is this: Big Cable wants to control who gets priority when it comes to throttling speeds on its network. Ultimately, that could take shape by way of charging big content provider—say, NBC or Disney—a few extra bucks to make sure what ever content they provide gets to your computer faster than your Aunt Marnie’s Lake Mead Vacation blog updates. Bastards!

In this latest round, the FCC charged Comcast with throttling the speeds of its customers who were using BitTorrent software in a manner that targeted them specifically—seeking out the particular content they were downloading and then throttling their speeds based on that.

The reason this is problematic? It could amount to antitrust practices.

See, Comcast also happens to be in the cable TV business. Turns out, the kinds of folks they were targeting were likely to have been downloading content that just may have been considered competition to Comcast’s programming lineup. In other words, if you were trying to watch an old episode of The Office online, Comcast might just have been impeding your ability to do so, simply because they want you to watch it on TV.

The FCC’s explanation summed it up like this: “In essence, Comcast opens its customers’ mail because it wants to deliver mail not based on the address on the envelope but on the type of letter contained therein.”
Comcast, of course, maintains they are acting well within their rights. “We are disappointed in the Commission’s…conclusion because we believe that our network management choices were reasonable, wholly consistent with industry practices and that we did not block access to websites or online applications,” says Sena Fitzmaurice, Comcast’s spokesperson.

So, here’s my suggestion to Comcast: You have a rare opportunity to become a champion in consumer eyes.

Reevaluate your stance on Net Neutrality and take a leadership approach to paving an unfettered path to the web for all its surfers. Think of the public relations coup it would be if the biggest cable company in the country changed the corporate culture around access to information.

Need further evidence why that’s a good idea? As of the time I’m writing this, Google’s (the company whose mission statement is simply “don’t be evil”) stock price is $467.86 per share. Comcast’s? $20.35.