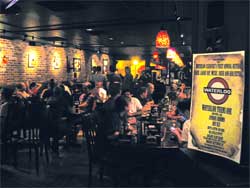 I am a bit jealous of my friend Neil. It has little to do with his collection of horribly good ’80s movies or his even larger collection of awesomely bad music from that decade.

It’s not even his straight-out-of-Pier 1 Imports Asian décor that has me feeling a bit covetous. No, I’m feeling green after realizing how close Neil lives to the Waterloo Icehouse in Old Town Louisville.

Being an astute journalist such as myself, I like to research an assignment before heading out. At first glance, it seemed Waterloo was likely an English pub, considering the logo is a replica of the London Underground insignia. A little research busts that theory, however. The folks that opened this Main Street hotspot are the same people that started the legendary Waterloo Records in Austin, Texas (which is where they “re-stole” the logo).

I nearly rolled out of my chair when I learned this factoid. This is the kind of news that makes a music geek want to faint. Years back, that very record store’s shelves held a rare Grandaddy single that is still a favorite in my collection.

Needless to say, I was excited to visit Waterloo again, only this time to belly up for some beer and burgers.
When I check out any bar, regardless if it’s for this column or my personal amusement or both, I bring with me a mental checklist. Here it goes.

First off, Waterloo is immaculate. Being just a year old (it’s birthday was Labor Day weekend, shortly after my visit), the ruddy brick walls lack the grimy character that comes with age. The floor was shiny, the lighting nice.

Honestly, if it weren’t for my always-classy companion, Maria, at my side, I would’ve felt out of place decked out in aged jeans and a button down, sans a button.

Our friendly hostesses led us to a table, where we noticed someone setting up some equipment on the makeshift stage toward the back. While it seemed rather elaborate for open mic night, it helped me continue along my mental checklist.

I began to feel even more at home noting John Coltrane sitting on the wall above us. The Beatles, Dylan, Cash and Miles Davis posters adorn the brick as well, proudly displaying that the owner of the joint knows and loves music.

Waterloo certainly lives up to its record store upbringings. Not to mention, you can order a PBR can off the menu. Or a wide assortment of wine. Or some tasty cocktails.

We munched on Atomic Poppers, an appetizer that actually lives up to its
flame-inspired name (good gawd, is that how they do hot in Texas?). There’s a full food menu to boot, and its burgers matched our server’s hype.

People really started rolling in as Thursday’s open mic began. The crowd was a mixed bag ranging from the girl with more piercings than Dennis Rodman to the Hawaiian-shirt wearing, double-chin 40-something.
Interesting people. Check

Waterloo is so much more than just a neighborhood bar. Needless to say, Maria and I had a blast on this Thursday night. We forgot for a few hours that we were in sleepy Louisville, instead feeling as if we’d somehow found ourselves sitting inside that cool, urban music club that only those in the know, know about.

Lucky Neil. He’s just a five-minute walk to Main Street, meaning he can leave Louisville for Austin or Chicago or wherever it is the night’s music takes him.

I think I need a Realtor.