12 Questions with the Reverend Horton Heat 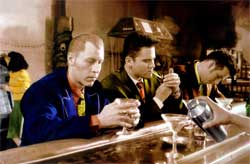 Jim Heath isn’t exactly a man of the cloth, regardless of what his stage moniker conjured up. But the enduring psychobilly pioneer, known better to his fans as the Reverend Horton Heat, has maintained an almost priestly devotion to his style and sound—until his recent outing with a new project called REVORGANDRUM, a Hammond-driven trio that released its debut album, Hi-Fi Stereo (Yep Roc Records) last year. Here, Heath talks about what it’s like to finally be a sideman, the importance of touring, and why he never turns down a gig.
French Davis: A good friend of mine played with the Tennessee Boys for a long time and he has the same Gretch you do. What is it about the Gretch that attracts roots-rock guys like yourselves?
Jim Heath: The “twangy” Gretsch sound. That’s it. They’re a little more delicate than a machine built guitar, and a little harder to play, but totally worth it.
FD: You’ve been becoming a bit ubiquitous in the gaming soundtrack circuit—I mean, for instance I played Psychobilly Freakout on just the hard level on Guitar Hero and it was tough! How is the process for getting onto a video game soundtrack different from landing on TV soundtracks or movie soundtracks?
JH: The process is exactly the same—when the phone rings, you answer it. It’s funny that I get asked questions like, “Reverend, why did you decide to play that venue?” My answer is always the same, “They called me up and I said OK.” My point is that as an artist, you have far less control over all of the circumstances of your career than people imagine. You have to learn to go with the flow or you can’t have a career in music. Every time I’ve tried to force myself into a particular gig, it never, ever worked out. My advice for young musicians is to be glad that you get asked to do anything at all. Then, do what they ask to the best of your ability. Also, be glad that those people won’t go so far as to try to tell you how to play your instrument—oh yeah, they’ll try to do that, too). Be humble and remember that being picky doesn’t mean you’re a better artist—it just means you’re…well…picky.

FD: Your new album, Hi-Fi Stereo, is a bit of a departure from what we’re used to hearing. How did it come together?
JH: My friend Tim Alexander and I were hanging around, and I mentioned that I was suddenly getting more drawn to the Hammond B-3 organists. He said that we could easily do an organ trio with him playing the Hammond and holding down the bass with his left hand and feet. Therefore, we would just need to find a drummer “in the neighborhood” so we could do easily do rehearsals. The first song he suggested was Harlem Nocturne, and I was completely sold on the idea.

FD: What led to this particular group of song selections for the album?
JH: We wanted to select songs that were like bands played from the late 1950s thru the mid 60s. Jazz numbers, blues songs and obvious organ classics mixed with TV and movie themes were all fitting in pretty well. We also have a pretty hefty block of New Orleans-style stuff.

FD: How did it feel to add another lead voice in the instrumentation?
JH: Well, Reverend Organdrum allows me to kind of relax and be a sideman. I like that.

FD: Are there plans to continue recording with this group?
JH: Not right now. Reverend Organdrum is on hold currently because Reverend Horton Heat (my main baby) is taking a lot of my time. Once we get out a new Rev. Horton Heat album, I’m sure ROD (Reverend Organdrum) will be out playing some more gigs.

FD: If you weren’t playing music, what would you be doing for a living?
JH: I don’t like to think about that possibility. Maybe I’d be a file clerk. Or a secret agent.

FD: You’ve been around long enough to see some major shifts in the music industry. How have these changes impacted you personally?
JH: Well, it seems like every time we’ve released a new CD/album, there’s some kind of paradigm shift in the industry, or some legal issue, or something pops up. I will say that the Internet downloading of music has hurt a lot of friends who produce music, sell music at local record/CD shops or play/record music. All of that being said, to me being a recording artist is not nearly as valid an art form as just being a musician, so, I just keep playing my shows and don’t let any of that “industry” stuff cross my mind too much.

FD: What’s good about the industry these days?
JH: Musicians can still make it if they have a van that runs good and the desire to travel like Vikings.

FD: Is there a particular dream project you’d like to do? Certain players you’d like to work with that maybe you haven’t had the chance to?
JH: I always wanted to do something with Jerry Lee Lewis. I got to open for Johnny Cash. I opened for Carl Perkins and he sat and talked to me for an hour and a half after the show. I got to meet and talk to Sam Phillips. I got to meet and talk to Scotty Moore. But, still not Jerry Lee…maybe someday.

FD: What’s next on the Reverend Horton Heat’s professional agenda?
JH: Making a new advertisement…er…recording. Thanks for the interest, but I’ve got to get to work.