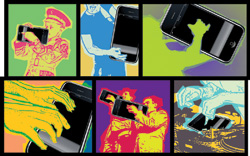 Can You Hear Me Now?

Do you have an iPhone?

If you do, and you have an inkling to create music, there are a couple apps you should check out.

The first is Ocarina, released last fall by Smule. It’s as simple to operate as the actual instrument. You blow into the mic on your phone while placing your fingers over the virtual “holes” to manipulate pitch. It works surprisingly well and is the first actual musical instrument designed for the iPhone.

The follow up from Smule is called Leaf Trombone and is operated in a similar manner—you blow at the mic and manipulate your fingers along a ribbon that is micro-tonal in nature; just like a trombone. You change octaves with the left hand, by pressing a plus or minus sign while playing a note on the right hand.

Both instruments add a network element—you can upload songs for others to hear or have people judge your abilities in real time as you play. The applications are 99
cents each.

When Les Paul put diode to fret board, he ushered in an evolutionary leap in music. The electric guitar not only changed the way music could be heard—it opened a new direction in composition. Without the electric guitar, there would be no rock and roll.

This simple, unassuming little software company is the next Les Paul. Sure, wholly digital music has existed for a while—electric violins and saxophones and drum kits and synthesizers of all types have been around for decades.

But Smule has done something completely different. Smule has taken the music out of the instrument and dropped it onto a new platform. Smule is changing the way music happens.
It used to be that in order to have a true ensemble experience, you had to find a big room with 20 or 30 chairs, fill them with musicians (and a drum section), add a conductor and some sheet music, then rehearse for a few weeks. And you had to know how to play your instrument.
Smule is forging a new road to these ends. They’ve given people a platform to stretch out their chops and begin playing and even composing in moments—even if they’ve never touched as much as a recorder.

But even more fascinating is the community concept they’ve added to the mix. The idea that you can start interacting with other people around the world is the first step toward global orchestras: people playing music together wherever an iPhone can get a decent signal.

The platform hasn’t quite advanced to that point yet. But it’s literally a moment away. And on a planet where unifying factors among people seem limited to shared economic crises, wouldn’t it be kind of amazing if music truly became a new bridge for communication among us all?