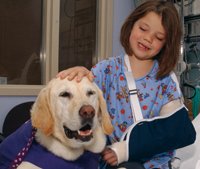 Anne Gillespie has tons of stories about the power of the human-animal bond and the program she calls YAPS. The most gripping story, arguably, involves a teenager, a dog named Boone and a letter. Or better yet, a series of letters, which fortified their relationship into something beautifully unbreakable.

Gillespie started the YAPS program at The Children’s Hospital after the organization disallowed dogs from visiting patients with cancer and blood diseases. “I knew there had to be a way around that,” she said. Gillespie has always believed in the healing power of animals and she thought a pen-pal program, which matches the children with dogs who are dealing with the same afflictions, would offer the same benefits as a visitation program. It’s a way for the patients to communicate their feelings to a similar, nonjudgmental friend; for pet owners, it’s catharsis and gives their ailing dogs a greater purpose.

“The healthy benefits have gone way beyond what we expected,” she said. “It’s really very magical. I think that’s the right word for it. It gives these kids a chance to tell their story to a loving dog who has been through the same journey. …There is real love there.”

Just a couple years ago, Gillespie paired a big dog named Boone with a young man who had bone cancer. The two developed a true bond over their common challenges and struggles; both had had a limb removed. They not only wrote back and forth but he also would visit Boone and his family.

After the young man died, his parents found a letter that their son was writing to the dog.
“In the letter, he was telling Boone that he was prepared to die, that he had come to terms with it, that he was at peace with it,” Gillespie said. “These were things he had not articulated to his parents. It really changed how his parents dealt with his death and it really showed how special the dog had become in his life.”

Loss and heartbreak, love and devotion, healing and surrender are a part of the story of YAPS. But it’s also a lot about diversion, about fun and even about therapy.

“It’s really taken on a life of its own. We had no idea,” she said.

As a pediatric oncology nurse at the Children’s Hospital, Gillespie’s original goal was to bring the benefits of human-animal interaction to the families in the oncology department. Now, she wants the program to spread globally and she wants children’s hospitals everywhere to participate. It has inspired something so profound and emotional that she can’t help but hope that all children with cancer and pet-owners of dogs with cancer can enjoy the benefits, she said.

“For the patients, it’s a chance to express your feelings and know you are heard but not judged,” she said. “And it’s also about the kids getting to be a caregiver. There’s a lot of laughter and fun and distraction. And on the other end, it really helps the dog-owners work through some sadness. It transcends any circumstance.”

“That’s just how he is. He just knows when it’s time to go,” Buddy’s owner Jim Whitehair says. The two of them have been volunteers at the hospital for five years.

Since 1984, dogs have been a part of the treatment happening at the Children’s Hospital in Denver. The Prescription Pet Program has brought smiles, laughter, calm and connection to the patients throughout the hospital, and everyday a different dog is on the floor.

“It changes the atmosphere and lightens the mood. And it makes a difference for the whole family,” says Jill Lorentz, volunteer chapter coordinator. “Animals are so calming and warm. People realize that if you give your heart to an animal, they will give it back. And it also brings the comfort of home to the hospital.”

In a sense, it’s not medical, it’s personal. And for the patients at the Children’s Hospital, that’s a lovely thing.