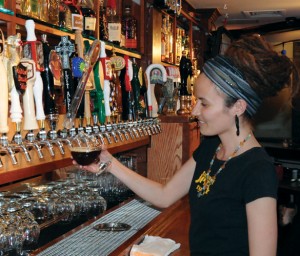 My credo of “too much is always better than not enough” has usually stood me in good stead. Whether dealing with money, snowfall, romance—vowels in Scrabble, not so much—dealing with excess is often preferable. And so it is with beer, especially when it comes to selection.

When confronted with a prodigious variety of quality beers, as we are here on the Front Range, the sane answer to the question of how to deal with this glorious bounty is to make as much of it available as possible. On tap, of course.

Back Country Pizza and Tap House (2319 Arapahoe, Boulder; formerly Dolan’s) has 54 taps and some outstanding offerings, both foreign and domestic.

Another rider on the tap-wagon is Oskar Blues Home Made Liquids and Solids in Longmont with 42 handles. Keen on American beers—“no imports, no bottles,” as they say—they are magnanimous with their selection and offer brews from local competitors such as Asher, Great Divide and Breckenridge breweries.

A Denver heavyweight is the Falling Rock Tap House with 75 beers on tap and another 130 or so in bottles. Its stellar selection also included a rare keg of Russian River’s Pliny the Younger Imperial India Pale Ale (11 percent alcohol by volume). They sold out in 30 minutes.

Then, there’s the Yard House at the Sheraton Hotel in Denver (Tremont and 16th) and in Lakewood at Colorado Mills Mall. They have more than 100 beers listed on tap and that’s great if you want to see lots of tap handles, but judging by the choice of beers, the beer buyers don’t seem to be breaking a sweat when it comes to finding and stocking unique brews. I mean, out of 100, there ought to be at least one or two that draws a crowd.

Mark July 15 on your calendar. That’s the grand opening of the Mayor of Old Town tap house on Mason Street at Laurel in Fort Collins. One hundred taps—with 21 dedicated to Odell’s and New Belgium offerings in support of the locals—will grace the walls.

For those looking to go Belgian, there is Rueben’s Burger Bistro at Broadway and Walnut Street in Boulder with 10 taps and 30 bottles, including La Trappe Quadrupel, an almost red Trappist ale (brewed in an abbey by monks) with 10 percent ABV and a simultaneously full, sweet and bitter flavor. In this same vein is the Cheeky Monk Belgian Beer Café in Westminster and Denver. With 36 Belgian taps and 47 bottles, they take the genre seriously.

Belgian beers—which encompass a variety of characteristics, from light, crisp blond ales to sour beers and lambics to heavy, high-alcohol triples—have caught the fancy of Paul Nashak, managing partner of Mountain Sun Pubs. He announced recently that, following in the footsteps of the popular Stout Month, the Vine Street Pub will observe Belgian Month in September.

“I give (Belgian beers) to friends that are wine drinkers who say they don’t really like beer,” Nashak said. “They represent an alternative to American-style beer; they have a dry finish. There aren’t a lot of hops going on.”

All Hail Colorado Beer Week! This first celebration of Colorado brewing runs April 8­–16 and features a variety of beer-related events. Meet your favorite beer’s brewer, educate your palate with vertical tastings and celebrate the world-class beer brewed in our backyard. Find a calendar and details at cobeerweek.com.