Hot Under the Collar 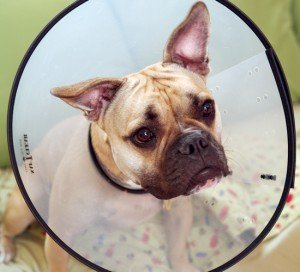 Sammy is sunshine personified—including her potential for damage and destruction.

When she’s not playing, cuddling and being generally adorable, Sammy chews on anything she can get her jowls around; that includes but is not limited to pencils, shoes, small sticks and large branches, paper and paper towels, blankets, mattresses and couches.

I’ve been told she’ll grow out of it. I’ve also been told she desperately needs training; even by my boss, who had the unfortunate luck of stepping in a pile of Sammy poop during one of few occasions she’s accompanied me to work. She occasionally jumps on people, and because she has no sense of personal space, she tries to perch herself on top of my body while I read or watch TV.

But this is not a story about dog training or potty training or teaching a dog about personal boundaries. Maybe next year, when I can let Sammy out of the house and unleash her on the real world.

This story is about how, for seven days and seven nights, our lives no longer revolved around keeping Sammy out of trouble—but instead, keeping her alive. More accurately, enveloped in our own helplessness, we could do nothing but pray, nod our heads as countless veterinarians told us what wasn’t wrong and what could be wrong and later what probably was wrong, and fork out as much money and credit as we could get our hands on.

In early spring, Jon and I moved in together, and along with Sammy and Emma, my Maine coon cat, we became a family. While Emma is self-controlled and calm, Sammy is constantly dependent and endlessly energetic. She persistently wants love and attention…or she’ll go snooping for something to destroy. But after a couple of months of co-habitation, she became a favorite companion of mine.

And then, one day in June, we woke up early, and nothing was the same. It was a like a light switch turned off. Sammy was lethargic and weak. She wouldn’t eat or drink. She couldn’t keep anything down, and her body rejected anything we could force down her throat—until her vomit was nothing but foam.

We took her to the vet, and they prescribed antibiotics. Her bulldog’s jaw fought fiercely against the pills, and any medication she did get down would come back up. Throughout the week, we’d try to give her boiled chicken and rice. We’d coerce eye droppers of water into her mouth. She wanted none of it. Her head would tremor near constantly.

We took her to the vet’s office three times throughout the week. They tested her, X-rayed her and stared at her with confusion.

On Friday, the situation went from concern to panic. Sammy hadn’t had consistent food or water for five days. And because it was the weekend and the vet’s office would be closed overnight, we took her to the emergency room. I left her there, handed them my credit card, and drove away with tears streaming down my face.

By Saturday morning, no one could tell us what was wrong with her. We took her back to our family vet for a few hours during the day, and they did more tests and more X-rays. Her parvo test came back negative.

We took her to the emergency vet in the afternoon, where the young woman we met with suspected it was: pancreatitis, a rare form of parvo that wouldn’t show up on a test, a bacterial infection or a blockage that wasn’t registering on X-rays.

By this time, we had spent about $1,200 on Sammy’s care. We were told her short-term needs could range from costing another $1,600 to $3,000 and beyond, depending on what we decided to do and what the vet felt was the appropriate step. Everything from exploratory surgery to ultrasounds were tossed around, as we listened in astonishment.

In a fury of tears and sobs, I had to confess: I could no longer hemorrhage money on assumptions. “If we had all the money in the world,” I said, completely unable to control my emotions, “we’d spend whatever we could on fixing this, but we don’t. We can’t keep spending and spending on treatments, tests or procedures that may not work.”

From there, I remember the vet’s blank stare, the word “surrender,” and more tears.

Luckily, our credit was given a nice boost when I was offered access to more than $2,000 in Care Credit, a line of credit for health care services, including care for pets. The tension in the waiting room seemed to clear as the money situation was “fixed.” Still, with the credit, we could probably afford Sammy’s medical costs for two to four more days.

A set of blood tests showed a likelihood of pancreatitis. That meant increased pain medication. The vet was convinced, despite two negative parvo tests, Sammy had the extremely contagious parvo, meaning she needed to be isolated within the facility. Because she had not eaten in days, they would put a feeding tube in her nose.

The hope we were given was this: If her white blood cell count increased and she stopped vomiting and having diarrhea, we would be in the clear. The next 48 hours were pivotal.

So, we left—not with Sammy, not with answers—but with a little more debt and with a sense that we might have a chance to beat whatever it was. That was the turning point for me: having a plan, resources and the ability to measure improvement. We prayed for white blood cells, we prayed for solid food, and we prayed for having Sammy back in our home.

The next day, we visited Sammy in her little isolated area. She looked at us with big, droopy eyes, not able to stand. It was overwhelming sadness, and depression started to sink in: What if we were spending this money only to see her die in the end? What if we spend thousands and still need to surrender her because we can no longer afford to pay? The “what ifs” were sickening.

Meanwhile, Jon and I spent hours immersed in deep, philosophical conversations about what it means to have a dog. For the first time, we discussed the responsibility of not just taking care of our pets on a daily basis, but through the catastrophes.

According to the ASPCA, the average cost of basic food, supplies, medical care and training for a dog or cat is $700 to $875 annually. But no one openly talks about the price of your pet’s life. What happens when your pet’s survival is on the line? How much will you spend to help your pet survive? Jon and I had wildly different answers to these questions.

I understand that point of view, but it’s just not how I consider pets. Why get a dog if you are not willing to do what you can to keep her alive? He said his friends have a $500 limit on how much they’ll spend on their dog’s medical needs.

“Maybe we should develop a similar policy?” he suggested.

But the intense conversations and arguments soon gave way to glee. On Sunday afternoon, we got a call from the doctor. Sammy’s white blood cell count had soared. She had not vomited in 24 hours. If she continued to do well over night, come Monday we could pick her up, take her to our family vet for the day and then take her home at night.

And that’s exactly what we did.  It had been a week of tremendous pain and suffering for the little dog. Something had taken over her body and pushed her to her limits. But she prevailed. Skinny and weak, she finally had the strength to jump up when she saw us coming. She was going home to toys, snacks, comfy couches and lots of stuff to chew on.

When she arrived home, everything changed. She fed from a feeding tube for less than 24 hours and quickly changed to solid food. With the help of some pieces of boiled chicken, she ate her large armada of pills and kept them down. She slept soundly. And so did we.

The outcome is this: We have a plan. We know what our limits are. We know while it’s difficult to put a price tag on a pet’s life, at some point in the distant future, some rare form of a virus or a nasty infection may require us to spend a lot of money on saving our pet’s life. And we’ll better communicate our financial concerns to the vet up front, so we can work with them to avoid extra costs. I’ve also asked that all of our future pets be rescues—to not only limit initial costs but ensure we pick animals that need help.

Sammy celebrated her first birthday last month, which means we’ve got a long way to go. But she’s gained all of her weight back, and I’ve started to tackle her debt. I often tell her she’s one of my most expensive possessions; right behind my college education and my car. She just looks at me, a little confused but very happy—a twig hangs from her mouth and dirt smudges her nose. When her debt is all paid off, I think we’ll get her trained.