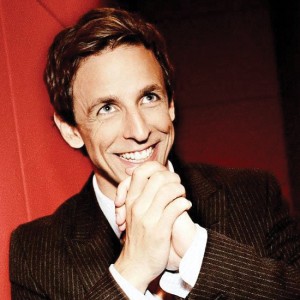 After a steady exodus of some of the greatest performers ever to grace the Not Ready for Prime Time Players’ stage, keeping the show funny and relevant was the biggest challenge a comic writer could face. Thankfully, Seth Meyers has been up to the challenge, helping breathe new life into Saturday Night Live’s sketches, while staying razor sharp in Weekend Update, putting together a stinging White House Press Correspondents speech, and getting a standup act on the road. You’ve seen everything else, so don’t miss his act. Sept. 16, Boulder Theater, 2032 14th St., Boulder, 303.786.7030

Summer may be over, but in Colorado, that doesn’t mean the nice weather’s gone for the season. It also doesn’t mean the nice weather’s still here, either, considering how quickly life changes on that front. But Boulder’s gambling on the sun, so dress in layers and come out to the Fall Festival on Pearl Street. One last chance to enjoy outdoor Boulder with plenty of food, microbrews, music and a carnival atmosphere for the kids. Sept. 23-Sept. 25, Downtown Boulder, Pearl Street Mall, Boulder, 303.449.3774

Looking for something a little more small towny in your final festival of the season? Then head to Erie for the Erie Harvest Fest: A full pumpkin patch awaits the kids (a free pumpkin to each child!), while hay rides, chili and pie contests, a car show and a talent contest (seriously, can’t wait for that one), along with all kinds of other food and drink and stuff-you-buy-at-festivals-then-toss-out-three-weeks-later vendors. Oct. 1, Erie Community Center, 450 Powers St., Erie, 303.926.2700

Make sure you “Leave a Light On,” Oct. 4 as Duran Duran “Returns to Now,” touring on their 14th studio album. All You Need Is Now (Tapemodern). The first wave of the Second British Invasion, Duran Duran’s ability to fill an “Arena” has never wavered. They’re still the “Big Thing,” from “My Antartica” all the way to “Rio.” And women all over the world are still “Hungry Like The Wolf” for the incomparable pop quartet. 1stBank Center, 11450 Broomfield Ln., Broomfield, 303.410.8497

This month: Five new Fall TV shows I’m sure will be cancelled before the fifth episode airs. And why.

1. 2 Broke Girls: Neither of them is Penny Marshall.

3. Heart of Dixie: It’s Doc Hollywood, except with the chick from The O.C. Yeah. You read that right.

4. The Playboy Club: It’s a show about the Playboy Club without any nudity. Been done. It was called The Girls Next Door. And it sucked, too.