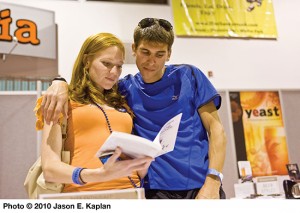 Second tier beer festivals in Colorado are growing, thanks to the success of the Great American Beer Festival. But the new element in these gatherings is a growing number of craft distillers in the state.

The recent 9th annual Craft Lager Festival in Manitou Springs the second weekend in August saw more than 4,000 lager enthusiasts in two days enjoy some 30 craft beers. But new this year was the introduction of craft distillers to the mix.

A relatively young bunch—seven years ago there were three craft distillers in the state; today there are 22—the addition was met with some skepticism by the brewers in attendance, said Rob Masters, distiller of Rob’s Mountain Gin, which is created at Boulder Distillery, also home to 303 Vodka and 303 Whiskey.

“They (the brewers) were a bit leary, but when they saw what we were doing, they thought it was great,” Masters said.

Much of the reason is that beer has become the new cocktail mixer. No longer are whiskey and vodka and gin relegated to dancing with cola, lemon-lime soda and tonic. Bartenders are starting to experiment with mixing stouts and whiskey as well as vodka and sour beers.

If you’re curious how this plays out, check out the Fall Harvest Brew Fest at the Drake Centre in Fort Collins Oct. 15. They, too, are welcoming Colorado distillers to serve up cocktails and other unique concoctions. In addition to the 20 regional breweries in attendance there will be a half dozen distilleries, including Boulder’s RoundHouse Spirits, Loveland’s Dancing Pines Distillery and Greeley’s Syntax Spirits, as well as 303 Vodka and Rob’s Mountain Gin.

The sold out Great American Beer Festival was a boon for Denver (and has garnered enough respect from the managers of the Colorado Convention Center that they’ve booked next year’s festival for Oct. 11–13, so plan to get your tickets early). Several local breweries that had gone winless in years past brought home the hardware this year, and visa versa. Here, a list of area winners.