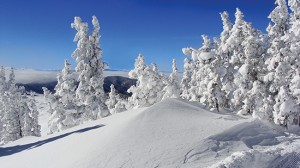 I have already purchased my multi-mountain season ski pass, so I can assure you all we will have a crummy snow year. There will be massive dumps, yes, but they will come mid-week and shut down I-70 in both directions depriving us Front Rangers of the bounty for days as the plow and front-end loader drivers clear the byways.

By the time the roads open, the Chinook winds will have scoured the thigh-deep powder from the ski runs and tossed it into precarious wind slabs and cornices on leeward faces making back country ski outings as safe as letting your blind grandma pick up the kids in the Hummer.

Seasonal snow predictions and forecasts are, for good reason, impossible to conjure with any kind of precision. You might as well try to guess which big name personality will slather barbecue sauce on his or her foot and swallow it whole (doh! Hank Williams, Jr.!). But I can pretty much guarantee you we would definitely be looking at an epic winter had I not purchased my pass. I’m just sayin’…

I try to spread my voodoo weather superstitions around to better my odds. The one time in the last 20 years I didn’t get a pass it was a banner season. Yes, 1995: The year the Fourth of July saw a 90-inch base and a snowstorm (!!) at A-Basin. The ski area was forced to close on Labor Day weekend so its 1994-95 ski passes would expire (and to do some required lift maintenance) before the start of the new season.

Since then, I’ve never failed to equip myself with some sort of pass. But that doesn’t mean I don’t tap into some folklore and wives tales to get a peek down the road at what dumps may await.

Sure, there are the Wolly Bear caterpillars that have varying widths of black hair, signifying varying intensities of winter. I never paid them much heed until I found one that was almost totally black, with only a touch of reddish hair on each end.

I took it as a sure sign of pending dumpage, blew off buying much-needed tires for my Ford and sprung instead for new Technica ski boots. It’s amazing the mix of confidence and terror that stem from putting studs into nearly bald truck tires.

There are other signs, too. Thick skins on onions and copious clusters of berries on the raspberry bushes that signal deep and long-lasting snows to come. I also watch my chickens and geese closely for signs of extra-dense plumage, which can only mean a heavy winter awaits.

But then the nerd in me takes over and I get hold of The Man: ENSO (short for El Niño/ Southern Oscillation) Diagnostic Discussion produced by the National Oceanographic and Atmospheric Administration (NOAA.gov). They’re calling for another winter of La Niña conditions (negative sea surface temperature anomalies across the eastern half of the equatorial Pacific Ocean) similar to last year. In short, it’s no time to welch on the ski pass because we could be skiing from October to July. Again.

Wing Commander Ripper, do you copy? Over.