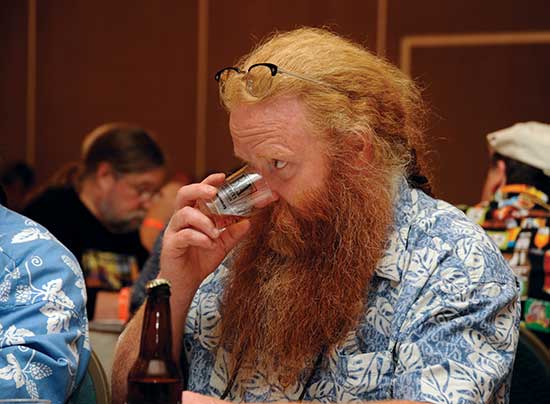 Triple A baseball is to the Major Leagues as home brewing is to craft beer. If you want to see tomorrow’s brewing stars in action—while meeting great people, stoking your inner foodie and enjoying a homebrew—join a homebrew club.

I say this because we are fast approaching National Homebrew Day (May 5) and American Craft Beer Week (May 14–20), so get your wort to boiling so you’ve got a homemade beer to raise in celebration. And as you ponder whether or not to add more hops (too much is always better than not enough), know that the foundation of homebrewing and the homebrewers monthly Bible, Zymurgy magazine, were created 34 years ago in Boulder. A tip of the pint glass toward the Flatirons will do.

The American Homebrewers Association was Charlie Papazian and Charlie Matzen’s brainchild, though for former gentleman became the iconic poster boy of the home brewing movement. Launched mere weeks after President Jimmy Carter signed legislation that included the legalization of home brewing on Oct. 14, 1978, the AHA today boasts more than 28,000 members.

Like the introduction of any virus, home brewing took a while to propagate. That next year, May 5, 1979, the first AHA National Homebrew Competition was held among 24 brewers submitting 34 beers in six categories. Fast forward to last year, which saw 1,650 homebrewers submit just fewer than 7,000 beers in 28 categories. Homebrewing, like craft breweries and brewpubs, has seen phenomenal growth over the years.

And while not every medalist in the annual National Homebrew Competition calls himself up to give it a shot in the big leagues as a commercial brewer, almost all of today’s successful brewers got their start over a foaming pot of wort in a kitchen of their late adolescence (read 20s or 30s). Dick Doore, co-founder of Lefthand Brewing with Eric Wallace; Adam Avery, president and founder of Avery Brewing; New Belgium, Odell, Twisted Pine, Oskar Blues—homebrewing is a common denominator among successful craft brewers.

“Commercial brewers who started as AHA members are more aware of issues going on, have more business savvy and are generally more likely to succeed,” said Gary Glass, director of the AHA.

“A lot of homebrewers dream of selling their beers commercially,” said Tim Myers, head brewer at Strange Brewery in Denver and a former AHA member. “Zymurgy magazine is a phenomenal resource, no matter what kind of brewer you are. I got a lot of ideas for new brews from the AHA and that magazine.”

For those wanting to see what the intermediate step is from being a homebrewer to going commercial, check out the annual entrants to the Great American Beer Festival’s Pro-Am competition. That is where award-winning homebrewers pair up with commercial brewers, scale up their recipes and brew like the big boys. Last year, Front Range AHA members Tom Gardner and Ted Manahan took home gold and bronze medals with CB. Potts in Westminster and Dry Dock Brewing in Aurora respectively in the Pro-Am competition.