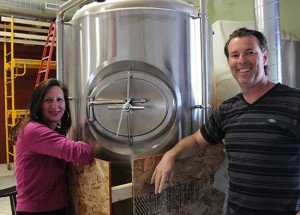 If a rising tide lifts all boats, Leslie and Steve Kaczeus are riding a tsunami of beer. The couple took the brewing plunge this year and decided to join the Boulder County craft-brewing fray by opening a nanobrewery in Niwot. Tucked into a 1300-square-foot space about a 9-iron shot south of the Niwot Tavern at 79th and Niwot Road, BootStrap Brewing is set to open its doors mid-summer.

The cute 3.5 barrel (105 gallon/525 pint) brewing system—hence the nanobrewery moniker—will work double time to fill each of the three, 7-barrel fermenters and five 7-barrel serving tanks that will eventually populate the space. At full capacity, Steve says he could squeeze about 700 barrels of beer out of his space. But he’s in no hurry; he’s having fun.

“If we stay this size, we’re OK with that; it will take care of us,” Steve said, pacing and pointing out where the still-in-crates fermenters will go in the rough space that is fast becoming a dream come true. “If it grows, we’re OK with that, too. We’ll check in and see where we are in a year.”

The venture was 20 years in the making—starting with a home-brewing kit—and has come to fruition thanks to the couple’s methodical approach, lots of homework, support from Niwot businesses and a stiff shot of providence.

As almost every homebrewer does, Steve fantasized about running his own brewery. So he did his due diligence, attended last year’s Craft Brewers Conference and even graduated last year from the American Brewer’s Guild Brewery in Planning course.

“At the Craft Brewers Conference we met so many brewers who were so supportive,” Steve said. “One of the guys from Great Lakes Brewing (in Canada) said ‘take a week’s vacation and come brew with us,’ so we did.”

The Boulder-based Brewers Association was also a huge help, the Kaczeus’ said, especially Erin Glass who cheered them on at every turn. The Niwot space also fell into their lap after a friend was having a pint at Asher Brewing Company in Gunbarrel and overheard a guy talking about space that was available in Niwot.

For Steve and his associate brewer, Dave Mentus from the Pumphouse in Longmont, the first beer off the line will be a light lager (“something with flavor, but approachable for the non-craft beer drinkers”) and a chili beer. Then he’ll be putting together a big hoppy India Pale Ale, followed by his Left Hand Brewing Pro-Am award-winning brown ale, an amber, rye and (one of Leslie’s favorites) his stout. There will also be seasonals and other specialty beers.

“The camaraderie has been amazing,” Leslie said of the help and encouragement from fellow brewers, local restaurants and the Brewers Association. “They have been so supportive and helpful. It’s like they want us to succeed.”

If you’re looking for a mountain get-away, head up to Snowmass for the 9th annual Chili Pepper and Brew Fest June 8 and 9. A two-day pass is $70 and includes chili and beer tasting, souvenir glass and music. Visit snowmasschiliandbrew.com for info.

Don’t get left out of Great American Beer Festival (Oct. 11–13) or Telluride Blues and Brews (Sept. 14–16). Tickets to go on sale June 15 for Telluride and later in June for the GABF. With headliners like the B-52s, Phil Lesh and Friends, Gov’t Mule and Trombone Shorty and Orleans Avenue, Telluride is sure to sell out fast. And the 2012 GABF sold out in a week. tellurideblues.com, greatamericanbeerfestival.com.