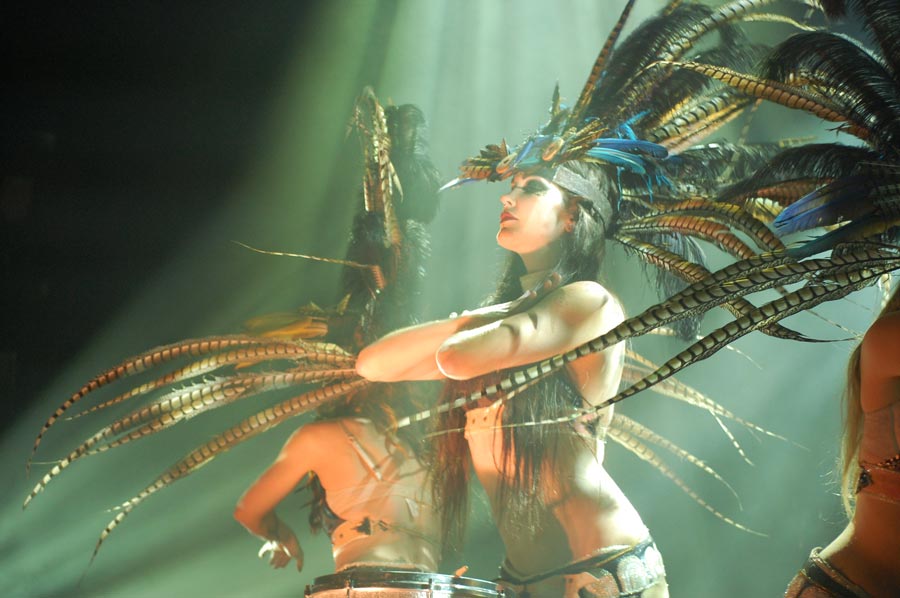 Every once in a while you may end up at an inaugural gathering, festival, or show. You may think you know what lies ahead, but you don’t. Your brain forms expectations and creates potential possibilities for the evening and you begin to wonder what you have gotten yourself into.E

Well, there is only one way to find out. You have to ride the roller-coaster and see what twists and turns await. The Beats Antique First Annual Creature Carnival was something like that. A spectacle, a carnival, a circus, a zoo and an interactive excursion rolled into one get weird ball. With such a high density of weirdness and energy in the four hour block, I will do my very best to explain the order of events as they unfolded.

The Beats Antique Reveal Creature Carnival Reveal Trailer leaves a lot to the imagination. Seriously, almost nothing we could post can possibly convey the experience of the overall performances.

Creatures congregated on the floor as Lafa Taylor stepped on stage around 8:00. Commanding the crowd and crushing quirky beats, he tossed out some experimental tunes that started to move the in the right direction, while beat boxing and vocal jamming. However, a couple technological snags came up, which, although handled quite well, made me wonder what direction things were headed in. While the floor was filling up, the stands were as empty as the beer I was holding, so I dipped out for a minute.

Emancipator stepped up to the plate at 8:30 and 1st Bank began filling up fast. A glance around the room at this time would make you realize there was no turning back. You were now part of the circus, with a plethora of costumes, hoopers and furry folks surrounding you. The crowd locked in as Emancipator settled into a groove of downtempo, trip hop and bombastic vibrations. As the collective unconscious began to grow conscious, emancipator peaked, leaving a growing vibe for Shpongle to feed off of.

If you crossbred Cirque du Soleil with a burlesque show, sprinkled a little bit of burning man on top and the performers were world fusion ethnotrance artists playing to you, you would be in one of two places, Las Vegas or a Beats Antique show.

Feathers in cap, Shpongle moved into the rotation at 9:35 on the dot and went hard in the paint from the get go. The best thing I can tell you is that If you took Planet Earth and crossed it with Albert Hoffman’s brain, you would have yourself a Shpongle set. However, if electronic world psytrance is not your thing, you should have either not been there, or headed for the emergency exit immediately.

After the crowd was thoroughly Shpongled, the carnival moved right along with jester’s and jokesters stepping to the stage breaking the ice, and giving the crowd much needed downtime before hyping them up for the main spectacle Beats Antique.

Beats Antique brought all the right ingredients last night and cooked up bass dressed in lingerie for dinner. If you have never seen Beats Antique, the best analogy I can offer is this. If you crossbred Cirque du Soleil with a burlesque show, sprinkled a little bit of burning man on top and the performers were world fusion ethnotrance artists playing to you, you would be in one of two places, Las Vegas or a Beats Antique show. Honestly, the creature carnival is not something I can really explain in words. It is a sensory overload between the costumes, the crowd, the music and the lights. For the first inaugural Creature Carnival, I must say it was well done. I am not sure anyone really knew what to expect. However, I have a feeling the Creature Carnival may be back in town next year and if ethnotronica, costumes and theatrics is your jam, this is well worth checking out.