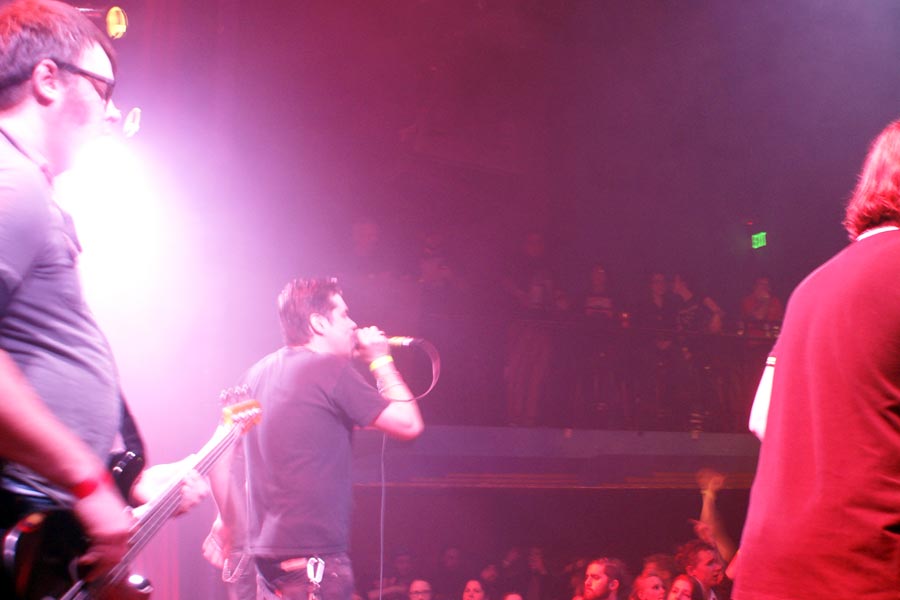 This Legend, Swingin’ Utters, and Lagwagon at Summit Music Hall

This Legend opened this killer punk bill in Denver. For the first time in over ten years, best friends Longineu Parsons III “LP” and Ben Harper, both formerly of Yellowcard, re-united in May, 2014 along with Chris Castillo of Stanley & the Search and Steven Neufeld of HeyMike! to form This Legend. The band signed to Cyber Tracks, which is an LA based record label owned by El Jefe (guitarist for NOFX) and his wife Jen Abeyta. Boy, did they play one hell of a set. This band is absolutely going places and I am excited to see what is in store for the future. They are promoting their new album It’s in the Streets. This Legend was just a preview to what was in store for the rest of the night. It was also the last night on tour for all three bands, and what better place to end than in Denver?T

The Swingin’ Utters is known as the band that has never made the same record twice. Heartfelt lyrics and piss n’ vinegar punk rock has made this 25+ years of the band what it is. The band took a hiatus for a couple of years at the height of their career, raising families and pursuing other acts (Spike, for example, is the lead singer of Me First & the Gimme Gimmes and also plays bass for Swingin’ Utters). Continuing playing in other bands while on break helped influence what would go into Swingin’ Utters next albums. While taking photos, I was showered with beer and the occasional crowd surfer. It was awesome and felt like I had travelled back in time to the heady days of punk rock excess. The Denver scene is revitalizing punk rock and to me it feels as though I am in the right place at the right time. Every time I make a post on my Facebook or a write up about a band, my friends always make the same comment of “Damn, [band name] is back at it again. Takes me back…let’s go!”

This being the last night on tour, Lagwagon made sure to end with a bang. Also being around for about 25 years, front man Joey Cape rejected the idea of releasing a greatest hits record for fear that it would cannibalize future generations finding out about their band. Joey along with the rest of Lagwagon decided to go in a different direction and went with the evolution of their sound by digging through old archives in friends’ basements, compiling all unreleased songs, b-sides, and demos. Packaging them with each corresponding album and re-releasing them for the world to enjoy. “Songs that aren’t only for diehard fans, but unearthed hits for anyone who likes punk rock”. I absolutely agree. To have the front man of Lagwagon, throw himself into the mayhem of crowd surfing is the epitome of punk rock.

We spoke to Joey Cape recently in our Brief Chat series. Check out what he shared with us in our online article.