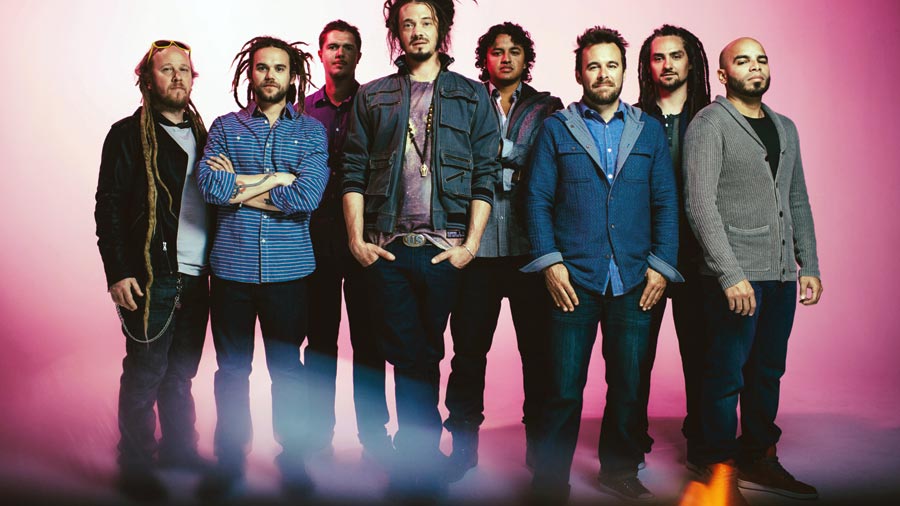 Since 1997 the Arlington VA-based pop-reggae outfit SOJA has been touring steadily, releasing albums and nabbing the occasional Grammy nomination along the way. Last year’s release Amid the Noise and Haste landed at #1 on Billboard’s Reggae chart and a Grammy nom in the reggae category. We spoke with frontman Jacob Hemphill about social justice, Ferguson and playing with Damien Marley.S

Jacob Hemphill: Strength to Survive was kind of that singer/songwriter, roots/reggae type of deal. And after we do that, we do something where we try to open up our arms and try to make a record that anyone and everyone can relate to and take in on their own. And that was Amid the Noise and Haste. The producer was Supa Dups, who is a guy who makes big time reggae hits. So, if you hear a Rihanna reggae song or a John Legend reggae song or a Bruno Mars reggae song, Supa Dups (produced) those. And we wanted to make a record that kind of had that feel, of just not really pop, but popular. And then we fill it with a bunch of kind of life affirming subjects. And then once we do that, we quote it back up again and drop a roots smash record, which is what we’re starting to write tomorrow.

YS: I’ve often felt when I listen to your music it’s a lot about how we have adversity and still find our own inner light and love. I know as you just said, people can find their own personal messages. But, what do you feel like the overall goal of the music is, as far as what people take away?

JH: (There’s a) woman (I know) named Sean Court, who I think is a genius. And, she said, “breathe in, close your eyes, breathe out, you deserve to be here. Breathe in, love is real, breathe out, you’re not your own enemy.” And by the end I was in tears and I walked up to her and said, “How did you do that?” And she said, “Jacob, I’m talking to myself.” I think the key to the songs I write is I’m writing to myself. You know, that (lyric), “you have the strength to survive, that we’re stuck in a revolving door, we’re caught in the race of a shore, look into your eyes, you have the strength to survive.” That’s me talking to me. And I apply it to the world and I apply it to people who live here. But, if the message is really going to be something that connects to humans then I’ve got to connect to me. And that is the way that I think about Marley, how he reached so many people is that he was talking to himself. He would say, “one love, one light. Let’s get together, let’s feel alright.” … “Is there a place for the hopeless sinner?” And, you know I think he was kind of talking to himself and because he was being real we can all find the reality in it that applies to us. Even if I’m not thinking the same thing he was thinking when he wrote it, it applies to my life as well. And I think that’s something songwriters do is they make it apply to them so that it can apply to everyone else.

YS: Well, they say artists paint a portrait of themselves in every painting, right?

JH: And those are the best ones, because they show their own weakness and they show their own vulnerability. And when we hear someone describe their own weakness and vulnerability it sounds beautiful to us, because we’re humans and we’re hardwired for compassion and love and cooperation, even if the world teaches us that competition and accumulation are the benchmarks of any society and any human’s life. That success is the measure of any person. The reality is that we love love, it’s inside of us. And so I think when you show vulnerability, you allow people to feel love.

YS: You said your goal is to stick up for the human race. What do you mean by that?

JH: I think that I have a responsibility. And it’s not just to put on good shows or make good records. I think when I look at the Facebook page and see that there’s 4+ million people that follow the words that I say and the music that we play, it makes me feel good. But then if I treat this thing in a selfish way where I’m like, “oh it’s just money and fame and everybody is coming to my shows.” Then I start feeling bad, and I’m like “Well, buddy, you’ve been given this amazing gift but you’re not taking any of the responsibility that comes with it.” So, for me, at the end of the day, what I like to do is say, “Look, if this world is a little bit better for me being here, then all the stupid shit I did will maybe be forgiven.” So if I can just put something in the music that tells people, then maybe all my dumb choices have led to something beautiful, so maybe they weren’t that dumb after all.

YS: You have some amazing guests on Amid the Noise and the Haste. You have Michael Franti, Damien Marley – what was that like for you?

JH: It was good, the whole theme of this album, like I said, is to make something that connects on a broad level. We didn’t have a lot of solos; there weren’t any 7-minute songs. We used some drum samples. That was all in a space of polished, rounded sound to make you focus on the lyrics. Instead of overcomplicating stuff we wanted to, on this one, sort of simplify. And that was idea of bringing in all these different voices. You have Damien Marley, who is in my opinion the leader of reggae today. You have Michael Franti who is one of the leaders of his movement. And then you have Colly Bud one of the leaders of his movement. And then we try to say okay, this song is about being on tour 200 days a year, who would understand that? Damien Marley would understand that. Okay so that’s his song. And then we say, okay, this song is about looking inside to find the light and to remember what’s good. And stop focusing on all the negative. Who would understand that, well Michael Franti and Naco would understand that. And so I just went through and just tried to find voices, and each one of these voices was someone I thought was good at speaking to people and connecting to people. And then we just kind of connected the dots and gave each person a song and we would just try to go back and forth, back and forth until we thought we had it right… And we looked at the list and said, “Jesus. You know we have sixteen songs and there’s seven features. That’s like half of the album is features.” But the next record we’ll come back and we’ll do something completely different. It’ll have no features and it will be rootsy as hell and there will be 9-minute songs and tons of solos. We kind of like to go back and forth to hit everybody. We don’t want to just make the same record and play for the same fans and preach to the choir, because if I go out there and have all of these people who already agree with what I am saying, that’s great and everything, but we’re all basically patting each other on the back. What I want to do is I want to reach new people, people who maybe have a feeling inside themselves, but they haven’t heard this band and haven’t heard songs like this. Those are the people I’m trying to get to.

YS: You have plans for the seventh album then? We were checking out ATO and realizing how many different, amazing musicians you have on ATO, but that they’re really supporting musicians being able to take that creative break instead of pumping them though and making them cookie cutter.

JH: Uh, yeah. We are going to begin the writing session tomorrow. And that’s something that’s embedded in ATO Records, I think, that stands for “According To Our Records,” and I think that says a lot about ATO. No one at ATO has ever said “you should do this” or “you should do that.” They come to the shows, they listen to the records and really hear it. We talk about the music and (they say), “It seems like you’re going this direction, is that true?” And I say, “Yeah, absolutely, that’s what I’m doing.” And they say, “Okay, have you ever thought about this?” and I say, “No, but that’s like a good idea,” and then I make a suggestion. “What about this type of feel?” And then they go, “yeah, yeah, that could be cool.” We kind of work together; I don’t tell them what to do, they don’t tell me what to do.

YS: Sometimes we have to wonder, can we even make it as a business in this world with more of a cooperative approach and the collaborative process?

JH: Of course. Yeah, we could have made a lot more than we’ve made already. I mean, just not using sweatshops alone has cost us a ton of money. You know, it’s how we teach our kids. I was taught that money is stupid and the only good thing about having money is not thinking about money. Now you get to think about the rest of life and what you’re going to do and what you’re going to change and who you’re going to be. And that was the way that I was taught. But then I’ve run into people who were taught that money and success are everything and nothing else matters and you got to scrape and grime to get your deal. And that’s the majority of the world that thinks that way. And what that has done to this world is it’s overpopulated it and it’s ripped down the trees, and it’s put shit in all the water and it getter hotter and hotter every year. It’s March and I’m standing here in a t-shirt. There’s going to come a time when we say we cannot do this. What cancer does is it eats everything. It eats so much. It takes away too much from the host. And when the host dies, cancer dies. So I think we collectively as the human race are going to have to come to a point and say we’re eating too much of ourselves and it’s because of this competition and accumulation that we engrain in our children from day one. Protect yourself and take as much as possible. There’s a very basic law of matrix that exists for all animals and all plants. The ones that take too much die, and that’s a fact. If a tree gets too much water it dies. If a horse eats too much food, it dies. The same thing goes for us, if we eat too much, we just die. That’s just the way it is. So I think it’s a concept that we’re passing down from generation to generation, on basically how to kill yourself. Not smart.

YS: Do you feel like that message is gaining in popularity?

JH: I think all of us have a long way to go. Not just in the Middle East, not just in Africa, not just China, but everywhere. We’re one of those societies that’s included in that. It’s not just talking about it, it’s: what are you going to do about it? And when you start doing stuff about it, you feel good. You’re scared of the unknown, but it feels good.