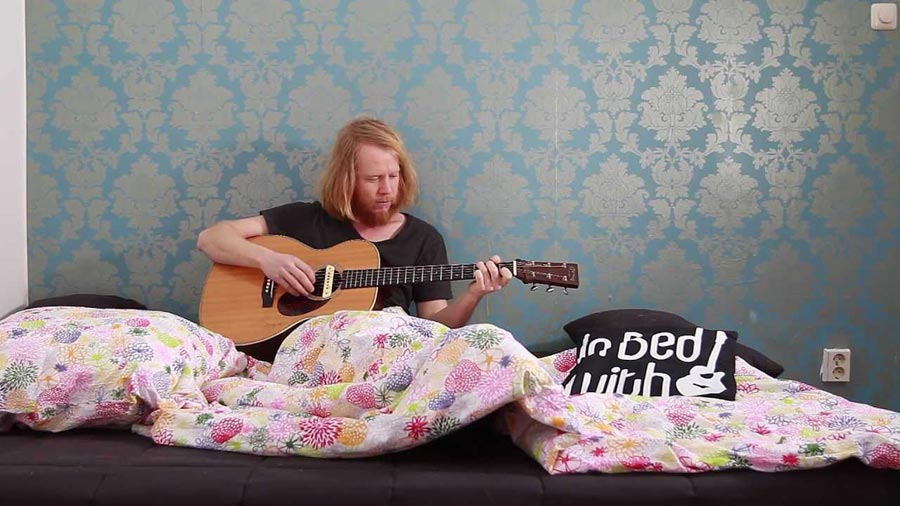 French/Australian Stu Larsen is a troubadour of the purest strain — his latest album Vagabond (Nettwerk Records, 2014) is paean to life on the road as a singer/songwriter. He plays at Lost Lake Lounge in Denver on April 27, with Japanese harmonica genius Natsuki Kurai.

YS: How did you and Natsuki Kurai find each other?

SL: Natsuki and I met by chance in Tokyo a few years back. I happened to go see a show on a night off and Natsuki was playing harmonica in the band, he blew me away and we ended up playing a couple of songs together at my show a couple of nights later. Since then we’ve toured Japan, Australia and all through Europe together, I thought it was about time North America was given the chance to fall in love with him too.

YS: Vagabond feels aimless — but in that romantic, beat-poet-drifter kind of way. How did you decide which tunes to record and which to save for another album?

SL: Vagabond feels complete to me, it’s every song I had written since the previous project up until that point, so there were no hard decisions trying to work out which songs to keep. It’s a collection of songs written on the road over a year or three.

YS: Is this your first time in Colorado? If so, what pre-conceived notions do you have of our fair state? If not, what stuck with you the most from your previous travels here?

SL: This will be my fourth trip to Colorado and I can’t wait to get there. I’ve really only had the chance to see Denver each time and I love it a lot, but hopefully I can explore more of Colorado over the coming years. The air is clean and crowds are friendly!

Murder on the Nile at Longmont Theatre Company

The classic Agatha Christie mystery Murder on the Nile comes to life on the Longmont stage this May. See if you can figure out who done it in this enduring favorite of professional theater companies large and small since it originally premiered in 1944. While a newly married couple enjoys their honeymoon on a cruise on the Nile, the husband is shot and a second woman is found shot in her bed. No one will leave until the true murderer is found. Murder on the Nile runs May 1 through 16 at the Longmont Theatre Company. Tickets are $18 for adults or $16 for students and seniors. longmonttheatre.org

What happened when Sigmund Freud met Salvador Dali in 1938? This is the subject of a regional premiere play presented by the Boulder Ensemble Theatre Company. Hysteria is the fictionalized account of this true story, in which Freud must deal with his affairs in the last few months of his life. In addition to Dali, Freud also meets with a mysterious young girl who turns up demanding his attention due to Freud’s treatment of her mother. Though this play originally premiered in London in 1993, this is the first time it has been performed in the Boulder area. Hysteria runs April 23 through May 17 at the Dairy Center for the Arts in Boulder. Tickets are $27 for adults, $23 for seniors and military and $16 for students. betc.org

The Boxmasters at the Boulder Theater

Finding ways to lob shots at Billy Bob Thornton isn’t hard, and there’s no shortage of famous actors-turned-musicians who also happen to suck in glorious fashion. The thing with Thornton is, he was a musician first, and his band The Boxmasters is a genuinely decent rockabilly-meets-mod-pop act. Thornton handles vocals (and yeah, he’s definitely got the right amount of twang and grit in his sandpapery voice) and traps, with J.D. Andrew and Unknown Hinson rounding out the core trio. They’re touring on Somewhere Down The Road (101 Ranch Records), which drops April 2. They may not be blazing any musical trails with it, but if you’re a fan of skinny-tied ‘60s rockabilly —or a Thornton-o-phile— you’ll certainly dig it. April 28, 7:30 p.m., $25, bouldertheater.com

Henry Rollins at the Boulder Theater

When we last caught up with Henry Rollins, he was hailing the end of the Bush era with his 2008 release Provoked (2.13.61 Records), where he struggled to find the positives in the previous eight years: “Um, sure, you know, in spite of the current administration, people are more aware now,” Rollins said in our October issue. “A lot of people have seen true dangers of global warming and climate change. This administration has motivated young people and voters in a way that we haven’t seen in a long while. America should have over 90 percent voter turnout, and we’re getting closer. I think Bush got a lot of people interested in democracy.” Ever the loquacious speaker, the Black Flag frontman continues to preach more truth than mainstream media can handle. May 16 at the Boulder Theater, $28, bouldertheater.com

Urinetown at the Bug

Imagine a water shortage so severe that the use of private toilets has become illegal. When a greedy corporation takes over the public amenities and raises the prices for humanity’s most basic needs, a hero rises from the city to try to save the day. Urinetown is the hit satirical musical with the terrible name that took shots at capitalism, corporatism and populism, all over Broadway when it first premiered in 2001. With lots of musical parodies and plenty of laughs that continually burst through the fourth wall Urinetown is the musical that proudly exclaims, “It’s a privilege to pee!” Urinetown runs May 15 through June 6 at The Bug Theatre in Denver. Tickets are $20 in advance or $25 at the door. EquinoxTheatreDenver.com