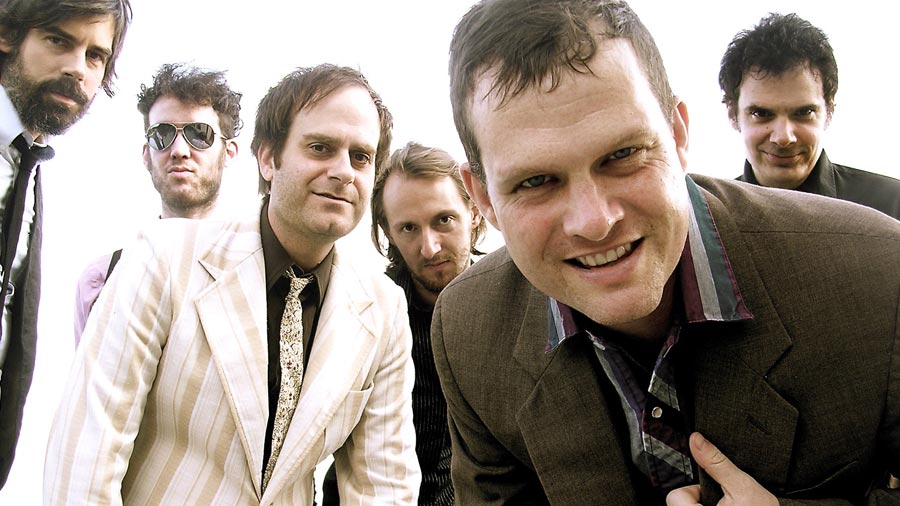 Detroit rockers the Electric Six are coming to town in June so we chatted with main man Dick Valentine, aka Tyler Spencer.

Yellow Scene: What have you been up to over the last year?

Dick Valentine: Well, the tenth album Human Zoo came out so we were pretty busy touring for that. We did a Kickstarter campaign over the summer for the Mimicry and Memories record, which just got mailed out for the people who bid on it.

DV: This is probably our 97th Larimer Lounge show. I always go back to the time we played there in 2005 touring the second album. I drank I think five Long Island ice teas because they kept handing to them to me, and your high elevation caused me to be puking all the way to Kansas City the next day. That was a rough one.

DV: We’re on album number ten, so we try to play a lot of songs off the new album. You gotta do “Gay Bar,” you gotta do “High Voltage,” you gotta do “Dance Commander,” and then whatever you can do off the other albums is kind of a bonus. We try to encompass the whole career. At this point we don’t over-think it. We just try to have a fun time every night we go out.

YS: When this tour’s done, what’s next?

DV: We kind of take it easy on ourselves in the summer. We have a handful of shows here and there. We do booze cruises in New York City and Boston, but the album gets recorded anywhere from January to May and we tour during that time as well. Our busiest months are September through May, and then we take it easy on ourselves June, July and August.

The Norwegians at Theatre Company of Lafayette

Norwegian gangsters aren’t exactly the most archetypal villains in literature, but they certainly make for some very funny characters in the Theatre Company of Lafayette’s production of The Norwegians. This regional premiere is about Olive and Betty and the two men they hire to kill their ex-boyfriends. Of course, everything goes wrong and both Olive and Betty soon find themselves in a crazy farce filled with gangsters, romance and mystery. C. Denby Swanson’s The Norwegians tackles the issues of stereotyping different cultures in its own charming way. The show runs through May 23 at the Theatre Company of Lafayette. Tickets range from $10 to $16. tclstage.org

John Scofield Quartet with John Medeski at the Boulder Theater

The list of talent John Scofield has performed with rounds out one of the most impressive resumes of any living jazz performer. With his trusty Ibanez in hand, the guitarist could be seen in the studio as albums like You’re Under Arrest (Miles Davis, Columbia Records, 1985), Shabazz (Billy Cobham, Wounded Bird Records, 1975), and Three Or Four Shades Of Blues (Charles Mingus, Atlantic Records, 1977) came to life, and has around 40 or so albums of his own under his belt. Prolificness aside, his post-bop, rock-infused style is as appreciated as it is aped in the recordings of legions of guatirsts who have trailed in his wake over the last three or four decades. Catch him live with John Medeski on June 18 at 7:30 p.m. at the Boulder Theater. Tickets start at $30; bouldertheater.com for more information.

When Robert Zimmerman first started playing in bands at Hibbing High School in Minnesota, it was mostly covers of songs by artists like Little Richard and Elvis Presley. It wasn’t until he was in college at the University of Minnesota that he started playing coffee houses under the moniker Bob Dylan. And from there, American folk — and rock, for that matter — would never be the same.

On May 17 at 6 p.m., eTown Hall welcomes a laundry list of local music performers to pay tribute to one of the most influential musicians in history for the 9th Annual All-Star Bob Dylan Tribute. Halden Wofford & the Hi*Beams, Long Road Home, Hal Aqua & the Lost Tribe, Matt Skinner Band, The Zimmermans, Allen Cutler, Ashleigh Flynn, Harry Tuft, Trout Steak Revival, Gasoline Lollipops, and Reed Foehl are on the bill, with more on the way. Tickets are $20. Head to etown.org for more info.

To call the 1940s an era of turmoil would be an understatement. The first half of the decade was spent embroiled in a war that shook the entire planet; the second half saw the beginning of a cold war that would last decades longer. Meanwhile, the civil rights movement hadn’t even begun, and race relations in this nation were still in an archaic place.

All that being said, there’s a draw to this era that remains strong, if somewhat puzzling, and the 7th Annual 1940s Ball captures all the romanticism with none of the horrors of the era admirably. They’ve raised the bar each year since they launched — attendees go all out with regard to styles and fashions — and the event is one of the biggest parties of the year, featuring music, vehicles and food celebrating the Greatest Generation. At the Boulder Airport (Blue Hanger) 3393 Airport Rd., June 13, 5 p.m. Tickets start at $40; 1940sball.org for more information.

Join everyone’s favorite nanny for a musical spectacle that’s positively supercalif..er… yeah. That. Disney’s Mary Poppins: The Musical for anyone from another plant, is the story of Bert, the chimney sweep/jack of all trades, helping Mary, Jane and Michael have adventures and learn some important lessons, all while singing and dancing to songs like “Jolly Holiday,” “Step in Time,” and “Feed the Birds.” The original Broadway production was nominated for an impressive seven Tony Awards, and this Boulder Dinner Theatre production brings all of that Disney magic to its intimate stage. Mary Poppins runs May 16 through Sept. 5 at Boulder’s Dinner Theater. Tickets start at $37, including dinner. bouldersdinnertheatre.com