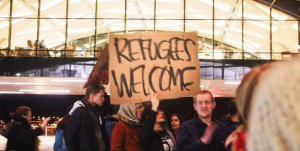 #MeinDrumpf‘s ban on refugees, as I wrote about here, was postponed today thanks to a last minute stay of execution, if you’ll forgive the unintended pun.

Judge Ann Donnelly of the U.S. District Court in Brooklyn granted a request from the ACLU to stay deportations of those detained on entry to the United States, the Chicago Tribune reports. She determined that the risk of injury to those detained by being returned to their home countries necessitated the decision.

Here are the CAIR lawyers emerging from their meeting with the judge, victorious: Video via Twitter.

While this act of legal heroics was in progress, protests erupted at airports across the nation as Trump’s ban went into effect, resulting in the detention of dozens. San Francisco. Seattle. New York. Denver.

The Denver crowd wasn’t as big as JFK’s, but it was a powerful, happy crowd. 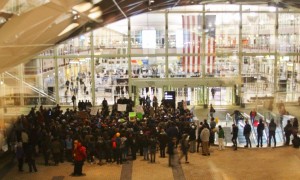 A man named Omar was detained at Denver International Airport while on his way home. Word went out in activist circles to rally to his defense and to the cause of love over hate. Nearly 200 Coloradans showed up in support.

Omar gave an impromptu speech after being released to the cheers and jubilation of the crowd. He said, in part, that things may be crazy, but we can do crazy things too. “Look at this. I don’t know you, but I know you’re my brothers and sisters. We will resist!” 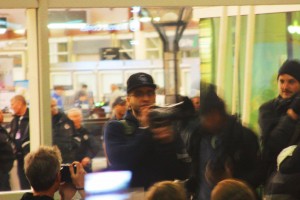 The crowd was ecstatic at his release, and had been peaceful and energetic throughout. Attendees were dancing, singing, and chanting as nearly 30 officers were stationed throughout the terminal, foyer, and near protesters. An organizer said over the bullhorn that the mayor of Denver had “called the police department to tell them we’re allowed to do this.” There was no mention of why the mayor needed to remind Denver police of the right to peaceably assemble.

The police, for their part, were genial and looked calm. 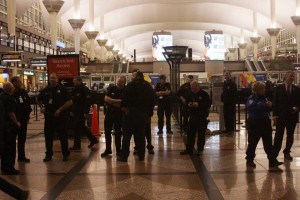 While the world is abuzz with talk of what the executive order will mean in the long term, discussing it on message boards and twitter, what we know from today is Americans are willing to mobilize at a moment’s notice to defend each other and to #resistTrump.

Protests erupted across America, followed by a judge’s stay orders. And today there is a temporary victory. There is more to do, my fellow Americans, and this is not the time to slack. My liberation, as has been said, is bound up with yours. We are all in this together.

Care to debate police smiles versus frowns or the logic of detaining citizens with dual citizenship? Get at me on twitter. Or don’t. 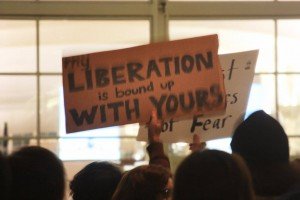 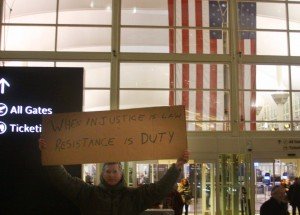