Industrial Hemp May Finally Have its Moment in the Sun 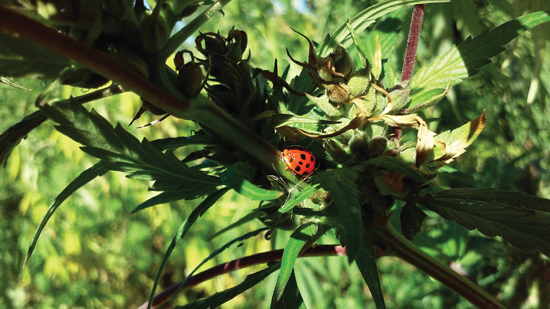 Though the implementation of industrial hemp growth may not be of interest to recreational fans of the plant, a report released by the Congressional Research Service earlier this year outlined roughly 25,000 uses for the crop, in industries ranging from textiles to aviation and many in between.

In late 2016, the Colorado Department of Agriculture announced a new certified seed program, introducing three varieties of seed that have passed trials and will grow in accordance with state law. Colorado requires that THC levels in industrial hemp crops be below 0.3 percent on a dry weight basis. The first of its kind in the nation, the program presents certified seed options that meet state standards, providing more oversight for farmers wishing to implement the crop and alleviating concerns over the amount of THC present in the plant.

The review board of the Colorado Seed Growers Association accepted three industrial hemp seeds — Eletta Campana, Fibranova and Helena — to be grown here. According to Schiavi Seeds CEO and founder Andrea Schiavi, a Kentucky-based supplier of European hemp seeds for the CDA and other agricultural departments in the U.S., the program is a step in the right direction, but long overdue.

Farmers interested in growing industrial hemp must register with the CDA, but the department does not facilitate the sale of seeds, or regulate processing and distribution of seeds or the crop. Some seeds available to buy in Colorado may contain THC levels above the 0.3 percent threshold, putting farmers at risk of having to destroy a harvest. The CDA conducts random testing on industrial hemp THC levels throughout the state. If the hemp is found to contain a higher amount, it must be destroyed, which is exactly what happened in the case of Byers farmer Edward Linnebur.

“Not only did I make the investment and plant it, but then there’s value of the crop I had to destroy. It’s very expensive when that happens to you. There are already many things a farmer has to risk with weather, hail drought and all that, but then when you have to go out and destroy it, that’s hard to do. What if it was you?,” Linnebur asked. He acknowledges the need for regulations on seeds and an overhaul of the industrial hemp program.

Industrial hemp has had a rocky history in the United States, mostly stemming from its derivation from the Cannabis Sativa plant and the regulations surrounding marijuana. Industrial hemp has gone through many iterations of legality, but progress seems on the horizon.

Colonial farmers were required by law to grow hemp, and it was accepted as legal currency in Pennsylvania, Virginia and Maryland. At the turn of the 20th Century, recreational use was introduced to American culture after the Mexican Revolution and an influx of Mexican immigrants around 1910. Marijuana became associated with the immigrant community and fear and prejudice drove the “Marijuana Menace” campaign. By 1931, 29 states had outlawed the drug.

The 1936 film “Reefer Madness” stirred panic about the effects of marijuana. The passage of the Tax Act a year later effectively banned hemp production. It didn’t last long however, as material shortages during World War II affected production of necessities like parachutes and marine cordage. The response? The U.S. Department of Agriculture’s “Hemp for Victory” program, which promoted the growth of hemp and offered draft deferments to farmers willing to stay in the U.S. to grow. By 1943, 375,000 acres had been harvested by the program’s farmers. The hazy 1960s prompted harsh drug laws, and In 1970, industrial hemp was lumped in with all other forms of cannabis as a Schedule I controlled substance.

Colorado voters passed Amendment 64 in 2012, but the legislation did not include provisions for the production of industrial hemp. The next year, the Colorado Senate passed SB13-241, or the Hemp Act, which set guidelines for industrial hemp. Federal parameters were laid out in the U.S. Farm Bill introduced in 2014, which removed restrictions for states that had previously legalized the manufacturing of the crop.

By 2015, the amount of industrial hemp in Colorado had increased tenfold, with nearly 2,000 acres of the crop being planted that year. Industrial hemp’s versatility does not seem to be especially well-known by the general public, but the demand for its byproducts is definitely there.

Although hemp and marijuana both originate from the Cannabis Sativa plant, their uses diverge greatly. Recreational use of marijuana utilizes the leaves and flowering tops of the plant, while the stalk of hemp can produce fibers that are useful in many ways. Hemp seeds produce milk, oil and other food products. The problem: People still confuse it with weed and are wary.

Veronica Carpio of Grow Hemp Colorado is a former dispensary owner and proponent of expanding not only Colorado regulations for hemp and its uses, but federal ones as well. She helped advocate for the passage of SB 15-196 in 2015, giving birth to the certified seed program and requiring its facilitation by the Department of Agriculture. “We really needed it for long term stability and growth,” Carpio said. “We also will have the economic advantage of setting the standard and opening a new level of standards for the entire country.” Carpio was the first female hemp farmer in the state.

Carpio backs Schiavi’s advocacy for a federal policy on industrial hemp. She acknowledges that hemp provides not only economics benefits, but sustainable environmental ones as well. According to Rick Novak, manager of the Colorado Seed Growers Association and director of Colorado Seed Programs, diversity is the key to everything.

Novak said diversity allows farmers to decide which seeds to grow, and gives them more financial opportunity. And hemp is more sustainable than other crops, “because the timing of the water requirements may be different than other crops, which when we’re looking at irrigation needs, diversity regarding the timing of water supplies sustains water over the long term,” Novak said. “You don’t have all your acreage using water at the same time, so you can break up water requirement needs so you can utilize water resources more effectively.”

In other words, it’s not that hemp is necessarily a miracle crop for the environment (it uses slightly more energy than cotton in production, for example, but about half as much land and water) but rather the diverse nature of its needs as well as its potential byproduct that make it useful and beneficial to Colorado. In addition, as long as the stalks aren’t being burned, the growth and production of hemp helps offset carbon emissions.

Novak urged supporting the processing industry by unlocking more uses for hemp in the state. “The sustainability of processing the crop is not where it needs to be,” Novak said. “There should be more opportunities for farmers processing fiber or seed. I think the seed is more transportable, but for the fiber, we need the industry to start expanding and evolving as this crop grows.”

The shortage of processing equipment and the unique nature of the crop make this difficult. For example, many farmers don’t have access to, or own, a decorticator; the machine needed to strip down the stalks from the hemp to access the fibrous material. Because of this, the current hemp stock doesn’t have much value.

Cross contamination is another possible downside of any crop, but unregulated seeds and strains of hemp with elevated THC levels pose a problem. The certified seed program hopes to curb that. “It’s like keeping your dog on a leash in a neighborhood of dogs that are in heat,” Novak said.

According to Novak, hemp is a ‘prolific pollinator’ — meaning that its pollen is big, light and can travel long distances. The seed certification tag allows tracking of the genetics of the seed and the past generations of a crop in the possible event of contamination of neighboring fields. Contamination wouldn’t show for several generations however, which in other crops takes about three years.

In February, the Colorado House and Senate voted unanimously in favor of a bill that directs the agriculture department to study the possibility of using hemp seed in animal feed. With a cattle population of over 2.5 million in Colorado, the passage of a bill allowing the use of hemp seed in feed has potential to benefit ranchers and livestock farmers. Hemp is naturally high in omega-3 and omega-6 fatty acids, and according to Hemp Food Australia — a prominent player in the manufacturing and exporting of hemp — it increases life expectancy in livestock and improves digestion. Hemp has been present in European cattle and livestock feed for some time as well.

The Colorado Cattlemen’s Association opposes hemp in feed on the basis of potential THC contamination. The original bill attempted to introduce hemp into feed without further study. The study now underway will be carried out by a group composed of the agriculture commissioner, a hemp and livestock producers and processors, and other experts who can contribute to the conversation, according to the commissioner.

The push for better processing methods as well as sustainable uses like animal feed are all part of the current concerns brought to the Colorado Legislature. Though it’s been a long road, many players like Schiavi remain hopeful and excited about what’s next.

“It’s unbelievable that we are so behind, but many other states now look to Colorado as an example,” he said. “It’s really very important for whole industry, and I do believe other states will follow.”

View all posts by Kaley LaQuea →