Voices: Boulder to Homeless: No Help for You Here 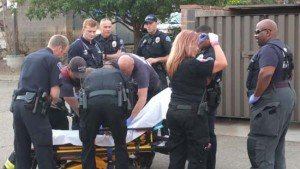 The City of Boulder has failed its citizens experiencing homelessness, but it is all too apparent that it has achieved exactly its goal: eliminating emergency and supportive services in an effort to push homeless people out of town. It has likely pleased the portion of the business community who want pressure put on homeless looking individuals so they will leave the downtown area. This comes in the form of an estimated $315,000 in extra funding to the police, with direction to sweep areas where homeless people congregate. Concurrently, funding for day services and overnight accommodation, both implemented at a very low cost thanks to the contributions of the faith community that hosted them, was cut before a new so-called Homeless Working Group submitted their recent report to the City.

The harsh, negative impact felt by people experiencing homelessness in Boulder has been immediate and counter to the intention of some on City Council who appear willing to provide services in the future to Boulder residents. I documented the arrest of a person panhandling at Broadway and Canyon just after the directive was given to police. The person’s identity who was arrested was shared with me by a friend recently, who shared that the gentleman is a Vietnam veteran who has lived in Boulder for years. A second arrest observation quickly followed, during which I confused a German Shepherd released by an officer for a police K-9 unit. It turned out to belong to one of the people the officers arrested. The man I witnessed be harshly arrested showed signs of going into seizure and complained of a bad heart and back. He was on a legal prescription of opiates and apparently gave confusing information when  questioned, mixing up the order of his social security number—which, incidentally, is illegal for law enforcement to request (see Colorado Revised Statues 16-3-103: “A peace officer shall not require any person who is stopped pursuant to this section to produce or divulge such person’s social security number.”). The man was charged, in part, as a possible result of prescription-drug induced confusion, for criminal impersonation. This is a class six felony in Colorado.

Confusions is the operative term as to what police are directed to do right now. Though Boulder has a camping ordinance that prohibits sleeping in public with anything other than one’s clothes for cover, I recently slept outside in a very public space after the police were directed to sweep areas where homeless people camp. Laying down in an area with approximately six other people, I didn’t see a police officer from 2 a.m. to 7 a.m.. It’s unclear, then, how strictly police are enforcing the camping ordinance. It may be that because Boulder is, by the acts of City Staff, responsible for there being no place for homeless people to sleep within City limits this summer, that police have been instructed not to issue citations for camping. Cities that have no shelter services and issue camping citations, have been open to defenses asserting violation of the Cruel and Unusual Punishment Clause of the Eighth Amendment. Courts continue to wrestle with the challenge of acknowledging people must sleep and that cities simultaneously have an interest in not allowing people to sleep anywhere they want. Boulder is currently smack in the middle of this legal grey area.

City Staff and some on Council, despite years of proof otherwise, appear to be banking on the misbelief that if life in Boulder is made hard enough for people experiencing homelessness, they will leave. With little other guidance than citation and arrest data, they believe most people using services or camping are travelers with no ties to the City. Being unsure of the truth of that belief has not kept them from instituting a policy that largely rests on police making life much more difficult for people experiencing homelessness. In doing so, City Staff ignore the constitutional right to travel, which Justice Stevens asserted in part provides “the right to be treated as a welcome visitor rather than an unfriendly alien.” The Supreme Court has also asserted in clear terms that “a State may no more try to fence out those indigents who seek . . . benefits than it may try to fence out indigents generally.”

The City of Boulder, having closed down homeless services and directed police to sweep areas people experiencing homelessness gather, is sending at least one clear message: Constitutional rights be damned, the City’s policy is that you are not welcome here.