November 6th marked the end of the election season, but only the start of activism around oil and gas.

It would be reasonable to assume oil and gas professionals would revel in the victory over proposition 112, the controversial setback measure), even while pro-health and safety activists continue their work, but you would be wrong. In fact, oil and gas employees and contractors have been threatening and harassing members and participants of Broomfield Clean Air & Water (BCAW), a local concerned citizens environmental activist group. BCAW’s mission is “to protect the citizens of Broomfield from adverse health, safety, and environmental impacts of oil and gas exploration and drilling within residential communities”, according to their facebook group, which has 2400 members.

The anti-proposition 112 victory was bought and paid for by Protect Colorado and allies; the Colorado Secretary of State’s TRACER site listed their total spending at $37,733,213.05 in oil and gas industry and ally contributions. Equally important to the proposition 112 defeat was the fuel tossed on the frack well fire by *nearly* the entire Democratic slate, from Governor elect Jared Polis and Governor John Hickenlooper on down, who showed profound unwillingness to endorse the controversial measure increasing oil and gas regulations. These same Democrats, it should be noted, regularly offer lip service to the idea of a fossil fuel free Colorado by 2041 (note: that’s 11 years too late to save the planet according to global scientific consensus), even while eschewing oil and gas regulation.

BCAW allege in a press release, corroborated by screenshots of the conversation (provided to Yellow Scene and embedded below) that, “employees and allies from the oil and gas industry threatened physical violence and showed utter contempt towards the residents of Broomfield in a conversation initiated by Broomfield Clean Air and Water (BCAW) on their Facebook page regarding a large on-site fire, which resulted in a 1-mile radius evacuation, that occurred just days ago in nearby Weld County.”

Naming names, BCAW claims that “Dan, believed to currently work at Liberty Oilfield Services and who wrote under the pseudonym ‘Dano Damano,’ extolled his praise on the pending large-scale drilling project of Extraction Oil & Gas, Inc. in Broomfield and arrogantly stated, ‘too bad. 139+ wells are coming to your town and I and others like me don’t want or need your approval to do what we do.’”

“Greeley resident and employee of HighPoint Resources [later identified as a third party contractor], an oil and gas development and production company, Brennon Myers ratcheted up the conversation stating, ‘you sound pathetic and emotional, just like have [sic] these specimens in Colorado you call men.’  Brennon did not stop there and told another female commenter, ‘Send your husband over so I can beat his ass, Cuz obviously he can’t put his bitch on a leash.’”

“Oil and gas insurance specialist with Alliance Business Services, LLC of Thornton, Colorado, Anthony Palmer responded to another female resident who was appealing to the oil and gas industry to work with residents on solutions rather than against them by stating, ‘you ignorant S%$#! You spew nothing but ignorance and hatred! Your [sic] an idiot that needs an education!’”

“Evans resident and employee of Select Energy Services, Brynn Heil, sent an unsolicited message to BCAW stating in part, ‘Fuck you. [Broomfield] is a disgrace to Colorado.’”

This level of violent and disrespectful discourse merits scrutiny and a serious level of attention from the folks who command the oil and gas empires of Colorado. Indeed, the legitimate fear is that violent rhetoric becomes violent actions. Additionally, the disrespect shown, as pointed out by Eric Rutherford (former candidate for House District 33) demonstrates a level of incivility and unwillingness to play nice with neighbors that should indict any industry profiting off of Colorado lands.

In an apology shared to BCAW, Ken Wonstolen, Senior Vice President and General Counsel of HighPoint Resources, said, “HighPoint Resources finds the social media postings by oil and gas industry personnel that you reported to us unacceptable, and apologizes to your organization, as well as to any individuals that were subject to this abusive conduct. Brennan Myers is not an employee of HighPoint Resources. However, we hold our contractors to the same standard of conduct we expect from our employees, and accordingly, Mr. Myers’ contract service has been terminated.

Again, our sincere apologies. Please be assured that HighPoint will work hard to earn the trust of all Colorado citizens in the way it conducts business.”

That’s a small win, though we suspect Mr. Myers will find work at any one of the numerous oil and gas outfits in the region.

A call to Liberty Oil Field Service was met with no comment. A call to HighPoint Resources was not answered. A call to Alliance Business Services, LLC was also not answered. Lastly, a call to the main HR line for Select Energy Services was not asnwered. This article will be updated with relevant info should any of these companies return our calls.

Screenshots of the exchanges are below: 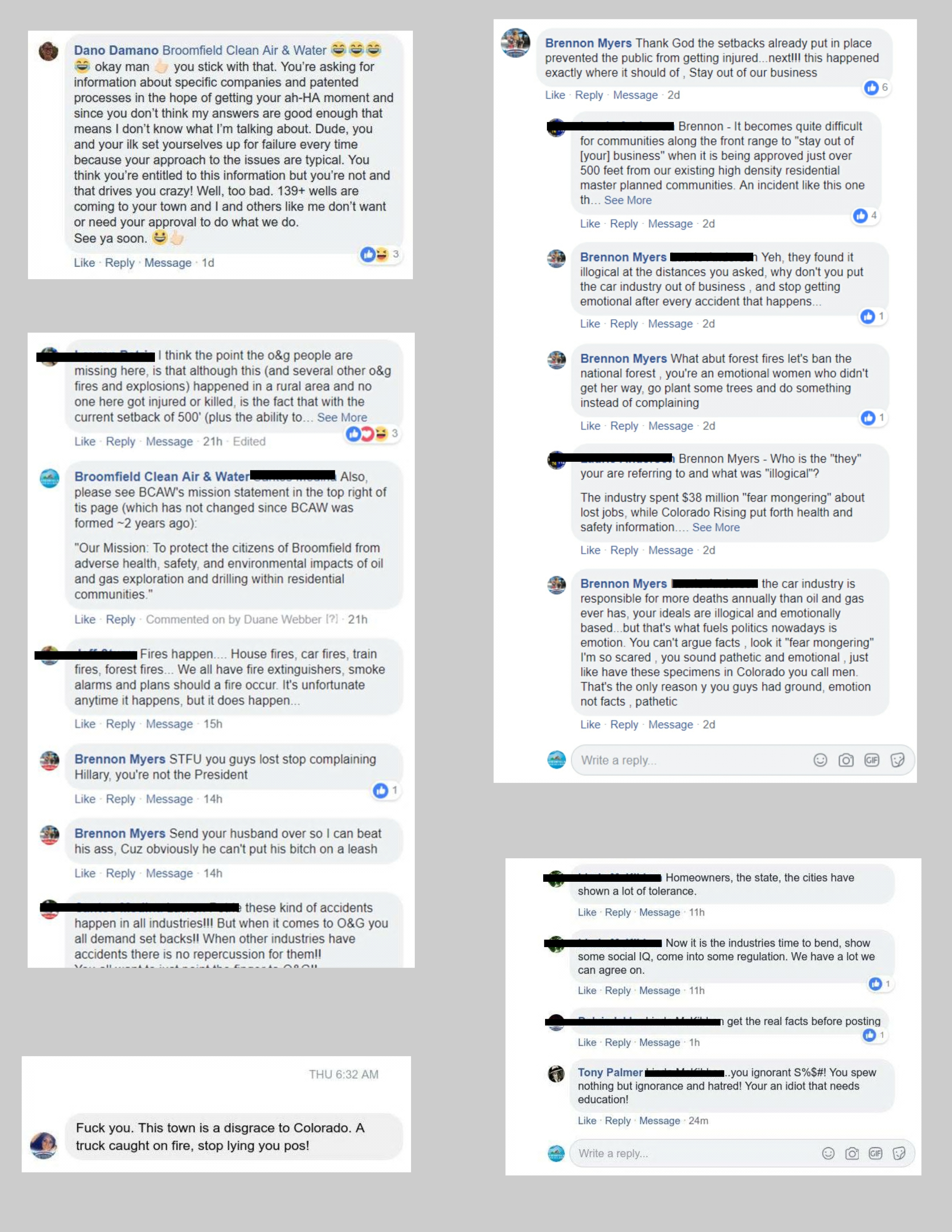