We can only hope the tide is truly turning: Black Lives Matter 2020 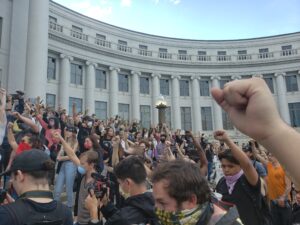 Tides are a complicated dance between gravity and inertia.

But tidal forces’ dependence on gravity can be a bit deceiving. Unlike gravity, tidal forces are much more dependent on distance than mass. So, the relatively small moon exerts a much stronger tidal force on Earth than the gargantuan sun because it is so much closer. Waves transmit energy, not water, and are commonly caused by the wind as it blows across the ocean, lakes, and rivers. The ebb and flow of waves and tides are the life force of our world’s oceans.

We can not talk about racism without talking about criminal justice reform, and we can not talk about criminal justice reform without talking about how American capitalism weaves into our social ills. To support Black Lives Matter is more than a hashtag. Changing the system does not come from a single wave, a single force, but all the forces working together to reach the shore.

My mind is blown that, for two decades, we have been talking about justice reform here at YS and, in what feels like a sudden turn, communities are standing in solidarity. The residents of Erie – a mostly white, middle-class, suburban community – can see the need for change and are planning a march for Saturday, June 13th. Some folks held a rally of near 40 people on June 10th, on the corner of Erie Parkway and County Line rd featuring mostly youth. However, recognizing that marching and chanting are more a display of support than real forces of change, the residents are also planning a Porchfront Series to include movie nights, book readings, and front yard get-togethers to talk. 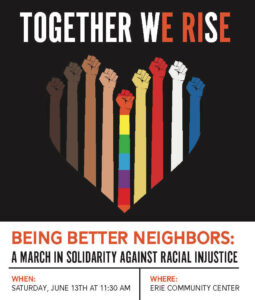 My mind is blown by this Juneteenth Proclamation the Town of Erie issued.

Additionally, Tay Anderson, Denver Public School Board member is actively working to get school resource officers (SRO’s) removed from the DPS school system. Having police in schools can actually cause more trauma than help – especially for black and brown children.

My mind is blown that Minneapolis is working toward dismantling its police department.

I am desperately hoping that the momentum can last into affecting real change. Occupy Wall Street (OWS), which had significantly greater impacts than the 3 months they were in Zuccotti Park, grew to large numbers, then faded away. The term “1%”  became mainstream after OWS, but the Coronavirus pandemic showed us that we still have a long way to go, as most of the stimulus money that was distributed went to publicly-held companies and tax breaks to the uber-wealthy.

There is an opportunity to make real change at this moment.

I really mean that. For sure, there is every moment of every day, but this moment in history? Rarely do I say this and it is hard to shock me, but this moment is not like many moments I have seen in my lifetime.

Equally, we are in danger of inertia.

As someone who has advocated for criminal justice reform for over a decade, my mind is spinning at the worldwide uprising – even down to suburban neighborhoods.  A federal judge issued a temporary restraining order against the Denver Police Department. The world is responding to a call for a change in how our police operate; specifically how we treat black, brown, and indigenous bodies. Ten years ago – hell, less than two years ago – we could not talk about criminal justice reform or race without being accused of hating America.

Trump’s America in the Bubble

Marching is a start. But it is not enough. A few PR moves by our police will not effect the changes that are truly needed…

…Starting with our justice system. Black men are disproportionately given sentences which, on average, are 3x longer than sentences for white men who commit the same crime. Black people are disproportionately killed by police. Half the people killed by police have a disability. Restorative justice and community-led programs – not traumatizing punishment – must be the focus of our social programs. Many groups are working to address the approaches that, for generations, the “tough on crime” propaganda allowed us to militarize the police.

Community groups will begin taking on 911 calls and low-level cases from the Denver DA.

Restorative Denver will be available in some misdemeanor cases as an alternative to the traditional criminal justice process.

Six years ago, I put together this exhaustive list of resources dissecting the criminal justice system in America. If you want to understand how it works, this write-up gives you more information than you can stand. 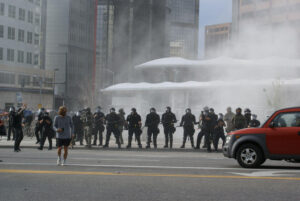 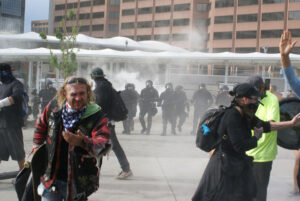 A week ago, I had never been tear-gassed before, but now I have. Like many media members on the ground, I experienced the brutal assaults of the Denver Police Department. If I had hidden behind the cops instead of in front of them, I probably wouldn’t have been tear-gassed “as much”. It was still everywhere. I found all kinds of tactical gear on the ground. I watched a man – on his knees, arms in the air – get pepper-sprayed in the face; not just a little, but a LOT. A State Patrol trooper shoved me, even after I told him – and showed him – I was media.

Having a respirator helped a lot – until technical difficulties happened when my vapor filters fell out. Tear-gas was everywhere and I found I couldn’t think  straight. I was trying to hold a phone to film it all and I kind of suck at doing Facebook Live, but all I could think was I have to do it anyway, because it’s a MASSIVE worldwide protest against injustice to black bodies. All during a pandemic.

Right now, people are out there every day. Not just a few, but thousands, around the country and around the world. A few nights ago, it was close to 8,000 in Denver by our estimates. Most TV news won’t tell you that.

While the protests have seen people of all types show up, most are as serious as it comes when wanting to see systematic changes. More importantly, people around the country are talking about racism – from microaggressions to implicit bias, to the heavy hand of the law and defunding.

Keeping the pressure on is the issue. Businesses are jumping in and supporting change to our system, with and without sincerity. Some truly mean it –  particularly smaller startups, locally-owned, socially-conscious folks. But many large businesses are jumping in, too. Probably for PR. It’s in fashion. To that I say: THANK GOD.

Communities everywhere are organizing marches and rallies. It is GOOD – very good – but only if we follow through on changing things like privatized justice systems, militarized police departments, The Pentagon, banking, healthcare, homelessness, addiction, mental health, mass transit, living wages for all, and most importantly understanding whiteness.

I am amazed to see the tides turn. I can only hope the sea levels of support change how we see each other, how we talk to each other, and how we treat our own humanity.

We need it. The world hurts.