Off Menu with Sean Gafner 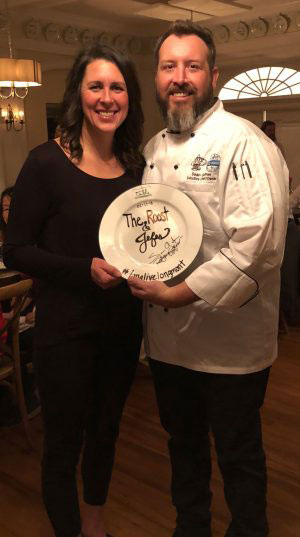 If there was a top prize for multi-tasking chefs in the area, Chef Sean Gafner just might win the trophy. But running three Longmont restaurants and raising four children is just another day for the chef, who prides himself on using the word “family” to include people both at work and at home.

“Our staff, and we really are family, is really close,” said Gafner.

Sean Gafner’s story in Boulder County began over five years ago. Like settlers searching for new way of life, Garner and his then girlfriend (now his wife and work partner Rebecca), came to Longmont with ideas and plans.

“I grew up on a farm and cattle ranch in the San Joaquin Valley in California and moved away as soon as I was 18. I worked in restaurants and fell in love with the high energy and fast paced life,” said Gaffner. He also loved the idea of working indoors with air conditioning after a life on the farm.

On the suggestion of a family friend, he attended Golden State Culinary Institute, took out a loan, and waited tables at a chain restaurant until he graduated. Life escalated from there. A peak at his bio reads like a manual on how to succeed in Restaurant 101.

Gafner “cut his teeth” in downtown Sacramento, and made it on a list of rising chef stars in the Sacramento area. In 2006, Gafner became Executive Chef at Tierra Oaks Country Club and Instructor of Culinary Arts at Shasta College in Redding, California. He opened the Stirring Café, and took over as partner of View 202 soon after. The Gafners even took on catering.  He appeared on television shows Chef’s Challenge, Good Day Sacramento, and Breakfast at Your Place while employed as Executive Chef of Sacramento landmark restaurants Celestine’s and Bella Bru.

No time to get complacent, change was in the air.

During a visit to Longmont, he saw some good bones in a brick space which later became The Roost. They made the move from California to Colorado.

Five years later, Gafner runs three restaurants – Jefe’s Tacos and Tequila, Smoking Bowls, and The Roost, which was the first to open on Longmont’s Main Street. A bit more celebrity seemed to follow him to Colorado.

The Roost’s rustic craft menu was featured on Food Network’s Diners, Drive-Ins & Dives episode “Sammies and Spice” in 2017. Guy Fieri hailed the Bangin’ Cauliflower and the Perfect Pork Burger on the episode, and stated, “there’s nothing I would do different” after a taste.

Gafner noted the small-town vibe affects both staff and customers. “Even they [the Diners, Drive-Ins & Dives episode] mentioned the hometown vibe with quality authentic food. I know my ranchers and farmers locally. We are a farming community,” Gafner said.

“I grew up on tacos in California. That’s my comfort food,” Gafner said. Variety is on this menu, and the tequila cocktails are local favorite. But there was a third member of his restaurant family still to bloom in Longmont: Smokin Bowls.

Smokin Bowls opened most recently and customers can enjoy the fruits of his travels to Japan. “You can have something comforting about having a warm bowl of rice or noodles,” he said. Foodies can choose between Mexican, Thai, Italian, Hawaiian, and more inspired bowls.

Gafner listens to his customers. The idea of Jefe’s Tacos and Tequila grew out of people demanding tacos at The Roost. Bowls were a popular request, also. Successful chefs pay attention. It’s foodie democracy.

With the responsibility of running a business came hard decisions with the onslaught  of COVID-19. Gafner made the difficult decision to close both The Roost and Smokin Bowls temporarily during the pandemic, maximizing sales at Jefe’s and minimizing financial issues with the other two. His staff is always on his mind.

“We had to lay off staff and it hurt. But we are giving back with feeding our staff each day, and we offer the free kids meals available to anyone, not just staff,” Gafner said. He praised his entire crew and noted how many of them still show up to volunteer at Jefe’s.

But even before the virus, Gafner gave back to the community. About 30% of profits are donated to area charities, events, and staff. He is just as committed to environmentally friendly dining. He said his staff is just as proud to do the hard work of going green. To Gafner, sourcing local is not a trend, but the best way to keep the micro economy healthy.

Sean Gafner is the head of a sprawling restaurant business on Longmont’s Main Street – a trifecta, in fact. But he’s got a seat for everyone at the table. After all, we’re family to him.