Don Quixote. An age-old story of madness, visions, and love. To see this ballet – a 150 year-old ballet first performed in 1869 – brought to life here in Denver by the Colorado Ballet, is simply magnificent. The Colorado Ballet, performing out of the Ellie Caulkins Opera House, were resplendent in the always excellent costuming, stage work that is excellent bar none, and an orchestra that continues to prove its worth to local audiences. Indeed, some of the major applause was for Adam Flatt and his orchestra.

If you missed the opening night of Don Quixote, fear not. With performances through October 13th, the Colorado Ballet dancers will be on hand and on-stage to delight local audiences with Spanish inspired classical choreography by Marius Petipa, paired with music by Ludwig Minkus, performed live by the Colorado Ballet orchestra. Importantly, this is the first time in ten years that Don Quixote has been performed by the Colorado Ballet, according to artistic director Gil Boggs. “Our dancers are really looking forward to performing this work. The choreography showcases deserve incredible technique and athleticism throughout the performance. The story this story of Don Quixote takes audiences on an adventure with humor and romance – and we can’t wait to share it with Colorado audiences…”, Boggs said in a press release.

The ballet, which is based on the classic novel, The Ingenious Gentleman Don Quixote of La Mancha, first premiered in Moscow, Russia in 1869 and remains one of today’s most frequently performed works. Indeed, while we often think of ballet, like opera, as a very highbrow affair, set in the likes of New York, Paris, or Moscow, this ballet is set to classic Spanish songs, in the Spanish countryside – in Gypsy camps, and with a broad spectrum of beauty and age and class represented, telling stories with age-old motifs – which makes it sure to reach across time and age and across social location to touch you.

On a personal note, as a writer, I consider myself a serious reader as well. I may have fallen in love with Russian and Portuguese classical literature, rendering some books – like Don Quixote by Miguel de Cervantes and a Hundred Years of Solitude from the famed Colombian surrealist author Gabriel Garcia Marquez – less than readable. It’s the variability of interpretation combined with the delicate if stamina heavy and artistically marvelous presentation in art forms like ballet that bring these to life for those of us who haven’t, or have refused to, read such dense, antiquated fictions. I’m immensely glad for the ability to witness dance bringing to life history at such high levels, technical wonders performed by such skilled dancers as the opening nights principal male lead, Francisco Estevez, who dances the part of Basilio, love interest to Kitri, Asuka Sasaki, whose father has promised her to a very well played, bumbling nobleman.. 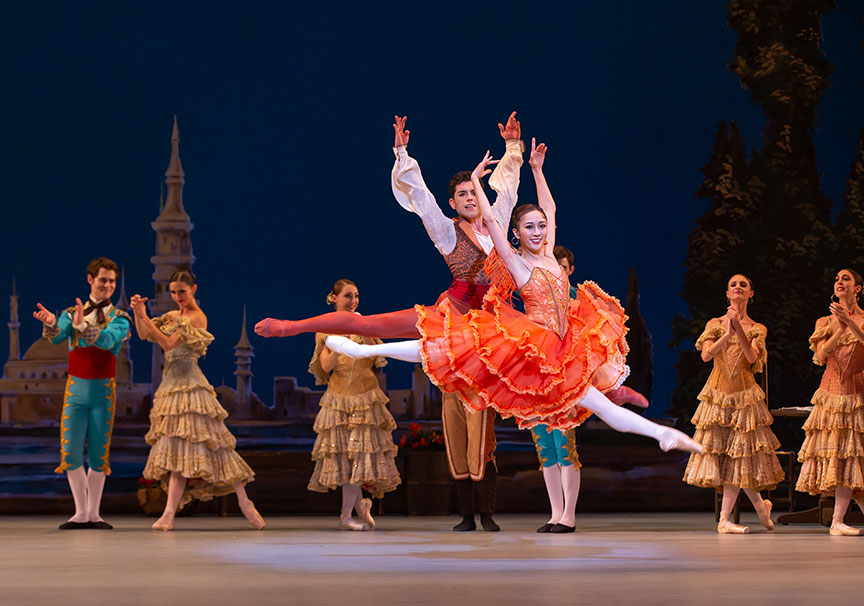 Our primary dance writer, Jennifer Arnone, had a chance to speak with Estevez who, to our surprise given his stellar performance, has never before played the role of Basilio or been in a Don Quixote ballet though, he tells us, he “grew up seeing it…”. Excited to be back at their home theater, after pre-season performances at the Vial Dance Festival and the Arvada Center, this being his first performance as a principal dancer on home turf, Estevez says, “this is my first time being involved with Don Quixote and it’s a ballet that I grew up watching. This is my first opportunity as a professional, or just as a ballet dancer, to be involved.”

Whenever a performance takes place, the performance is imbued with the history of the character, the history of the story, but it’s also brought to life by what the performers bring to the table. These are the ways in which a dancer, an artist, brings characteristics from their own lives and their own histories, their own passions and proclivities, to the role. Estevez tells us, “it’s a very fun role, very technically demanding as well, but for the most part you have a lot of artistry that you can bring to the role. It’s very much a storytelling role… there’s also a lot of comedy involved in the ballet and in the role as well, so there’s a lot of fun little avenues that you can take down [sic] artistically that have been fun to explore.”

Classifying it as a romantic comedy ballet, the term being his own, he says that, “it’s still in the classical realm of ballet, of what you expect, but there’s definitely a lot more freedom… [Don Quixote] has a lot more light heartedness to it, energy, comedy, drama, romance. There just a lot more action.”

The history of the ballet itself, similarly, can’t be understated. 150 years of the ballet being performed, with another 264 years prior to that of the novel growing in importance since it was first published, makes performing it being part of a massive, growing, and long respected tradition in ballet. This version, Esteves tells us, was “loosely based on the American Ballet Theater version”, because the Colorado Ballet director and others had early careers there. “That company has a rich history of very famous dancers, Baryshnikov being one of them, that have done this roll and had his own version of it as well, when he was director of it, so there’s definitely big shoes to fill. But with that comes a lot of excitement to be able to add to that history a little bit, even here in Denver. The Denver audiences will definitely get a taste of that rich history.”

The history is important, in both the history that’s passed and in the history being made today. If young dancers like Estevez and Sasaki leading the way in Colorado, bringing traditions from around the world to our humble locale, the future is bright – both for these young dancers and for the arts in our area. We highly recommend heading on over to the Colorado Ballet website to pick up your tickets for the last of the performances before they’re all sold out. There are only five performances left, from October 10-13, two of which are matinees. I would also highly recommend reviewing the upcoming dance schedule for future performances, which includes family favorites The Nutcracker, Peter Pan, and others.

Beyond the art, beyond the culture, and beyond the opportunity to be downtown in one of the most gorgeous buildings Colorado has, participating in the creation of our local own artistic history is what makes going to the ballet, the opera, and the theater so important. To that end, a brief story: as I was leaving the Ellie Caulkins opera house with my friend Namiq, I was stopped by a group of young black men. Three of them, out in the cold listening to Brothers of Bass Brass Band performing on the steps leading down to 14th street, and they asked why we were so dressed up. When we told them we were at the ballet, they howled in surprise and said that they had always wanted to check out something like a ballet. I told him they should, that it wasn’t just for the rich or for a certain race, that people of color had invented ballet performances and have been dancing on their own stages for centuries, that the most famous ballerina in the world right now is a Black woman, Misty Copeland, who wasn’t even the first woman of color to dance ballet. They were struck by my words and ask for information. I handed over my Don Quixote program, encouraging them to check it out. They hugged me goodbye, a strange moment of connection and impact that I don’t recall experiencing at any other performance in Denver.

We should all take the time to do our part to encourage the next generation to participate in the arts, whether by becoming artists or art consumers. It’s a benefit to all to have a vibrant arts scene. Kudos to the Colorado Ballet for their work in these areas.

All images courtesy of Mike Watson for the Colorado Ballet. 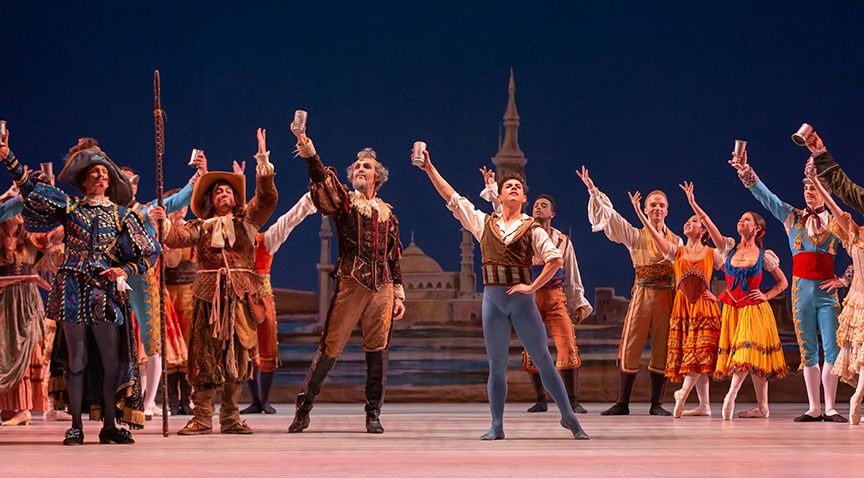 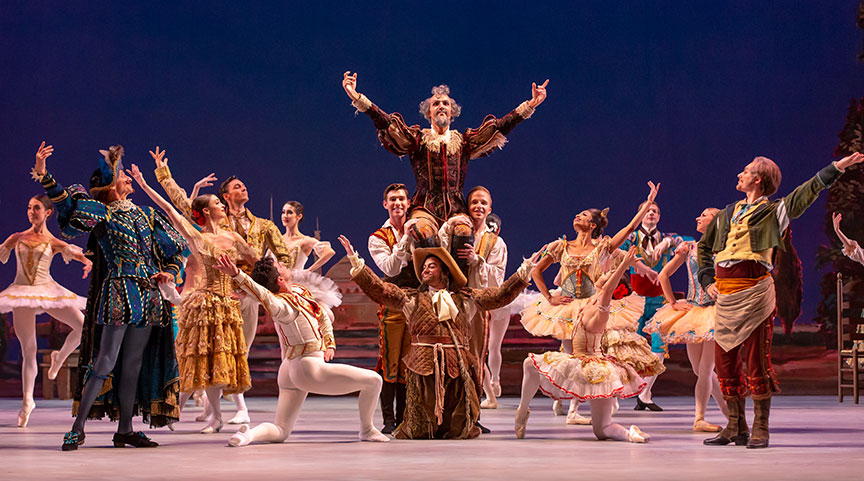 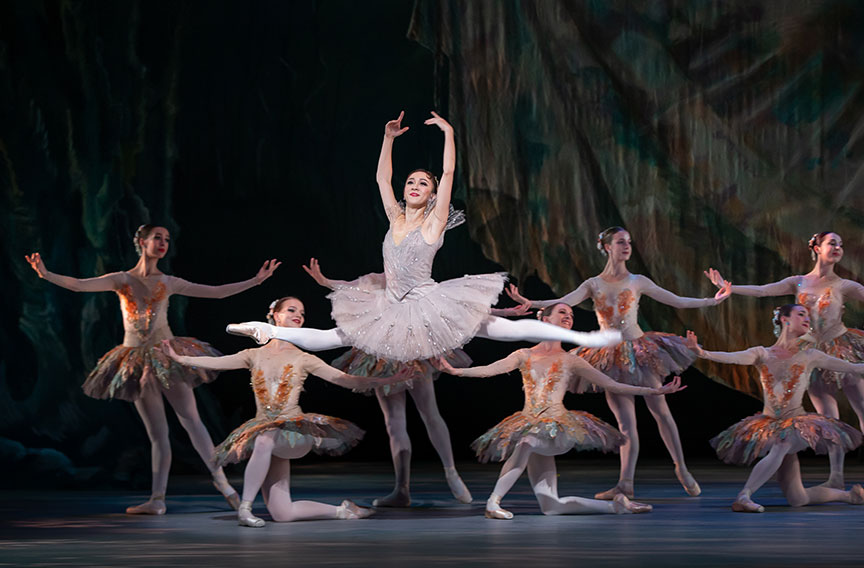 Asuka Sasaki and Artists of Colorado Ballet by Mike Watson 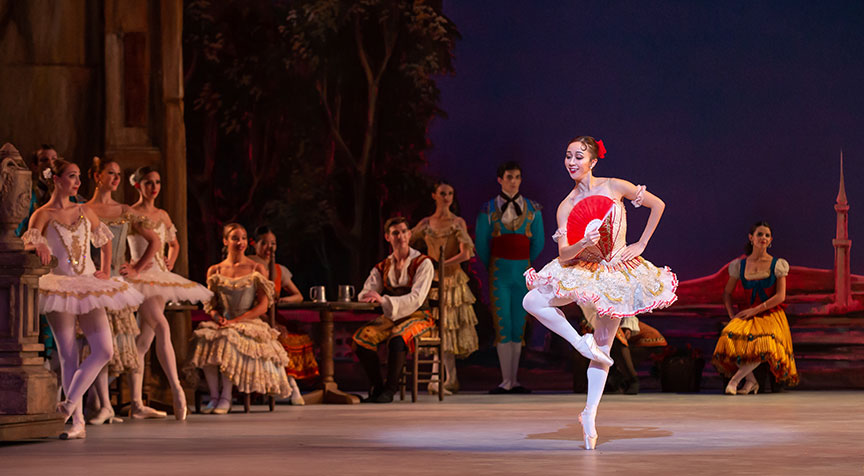 Asuka Sasaki and Artists of Colorado Ballet by Mike Watson2 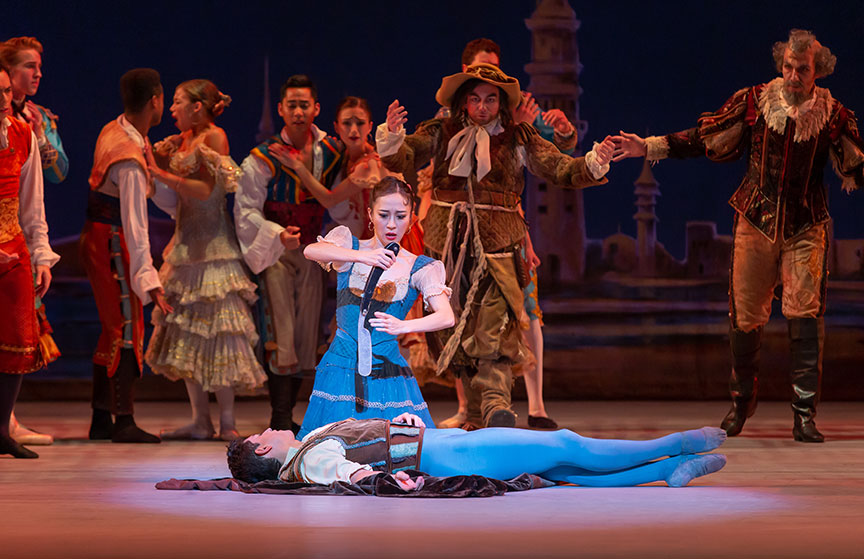 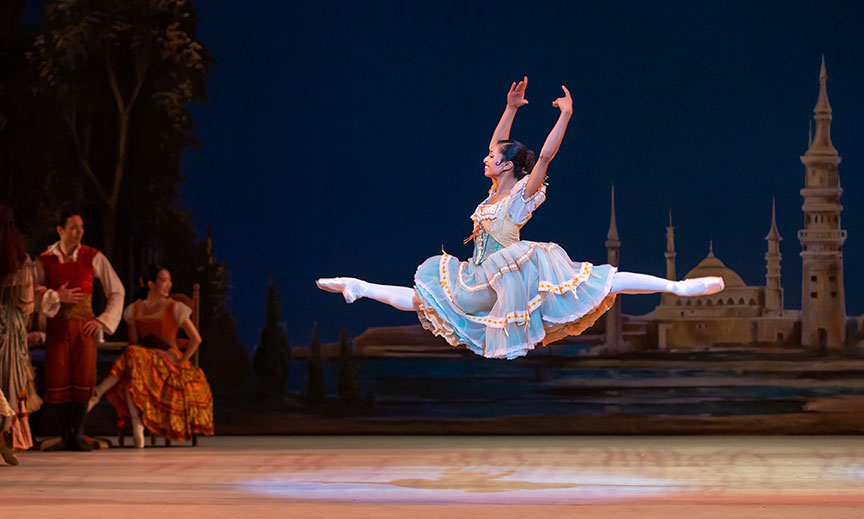 Fernanda Oliveira and Artists of Colorado Ballet by Mike Watson 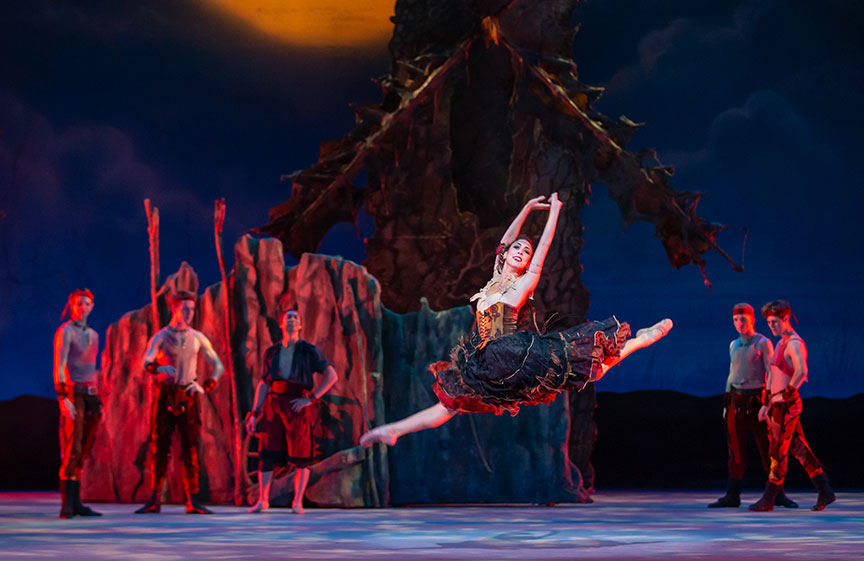 Francesca Martoccio and Artists of Colorado Ballet by Mike Watson 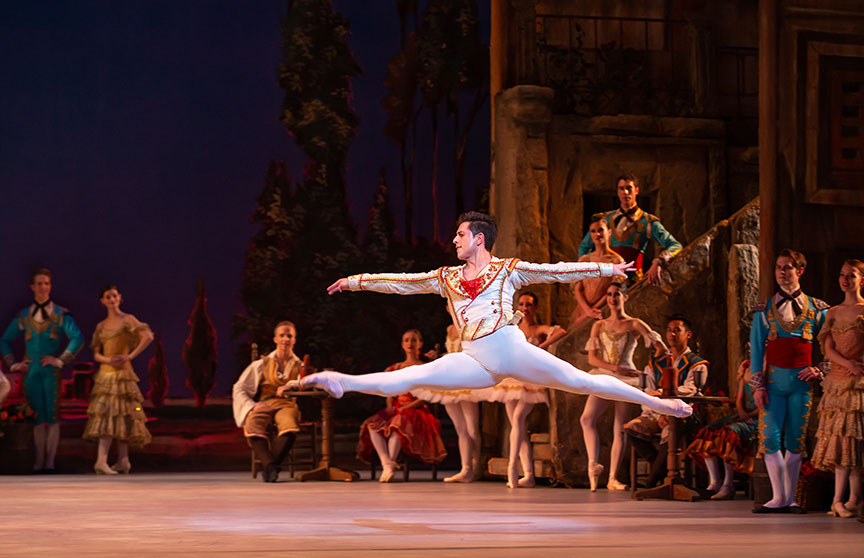 Francisco Estevez and Artists of Colorado Ballet by Mike Watson 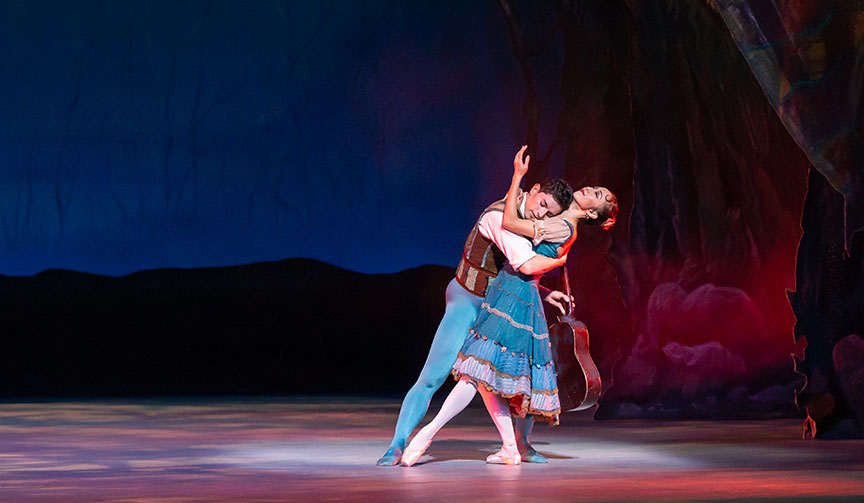 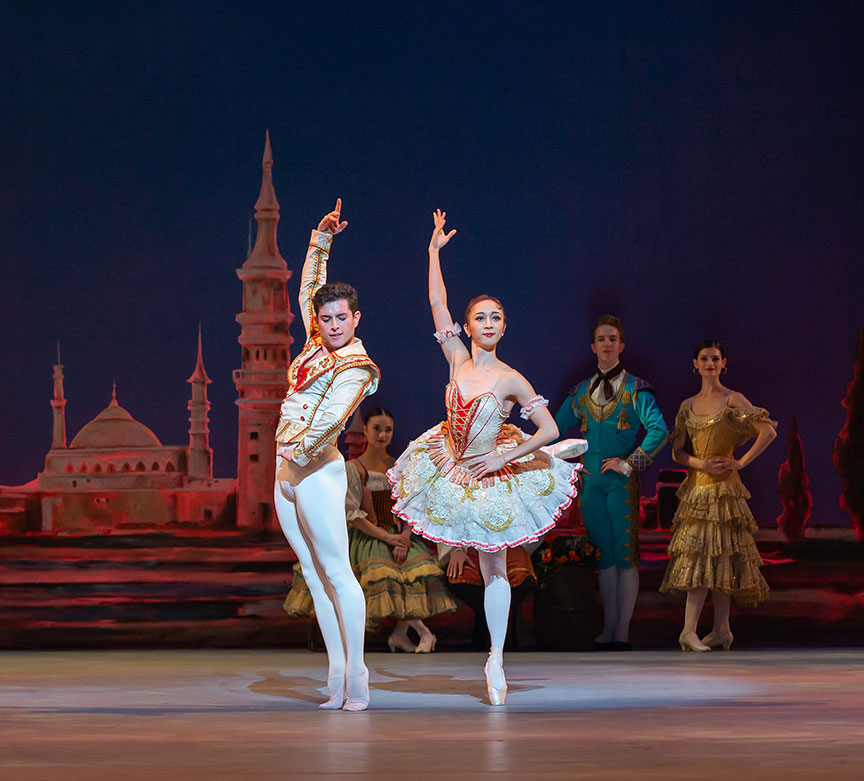 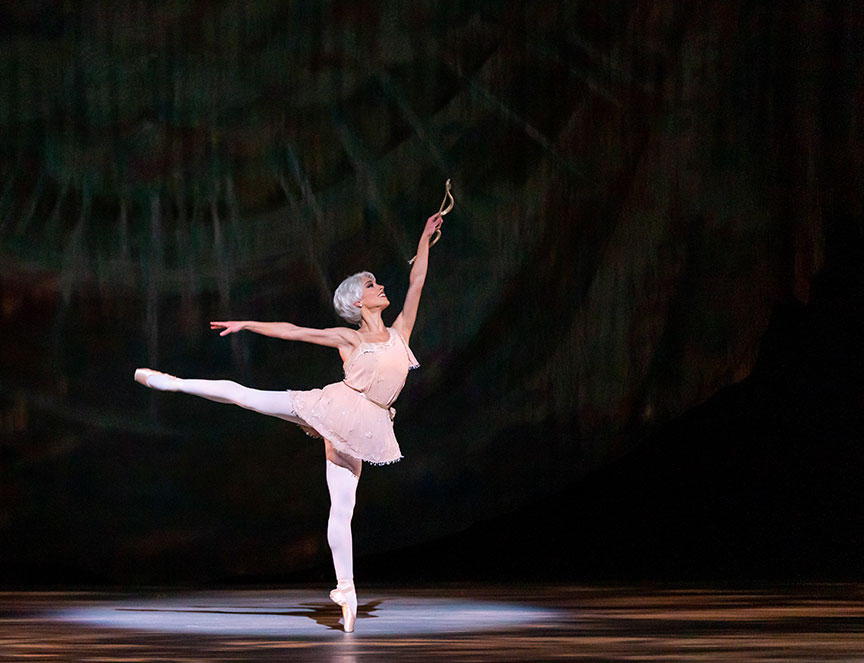 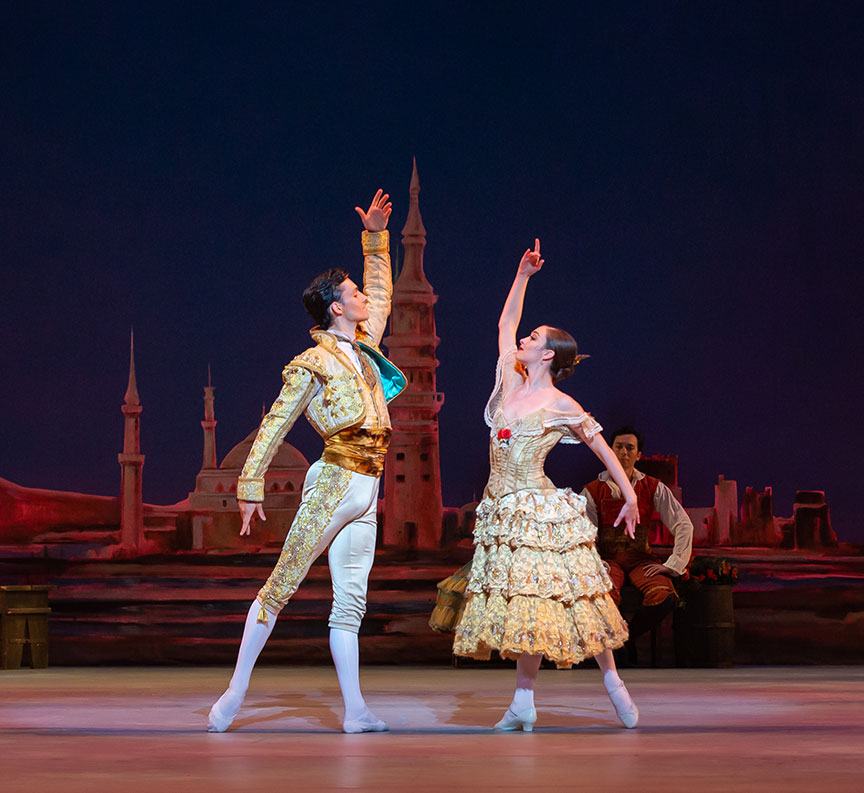