The day before the Colorado Ballet premieres a new ballet, school children are offered the opportunity to attend a full-dress matinee at a heavily discounted price. These special performances are essentially dress rehearsals complete with costumes, makeup, lighting, and orchestra. The crowd is young, loud, and rowdy, which is perfect for young kids who may otherwise have difficulty maintaining the formal decorum generally required of ballet attendees. On Thursday, February 27, my bouncing 8-year-old daughter and I, along with Yellow Scene editor, De La Vaca,  were treated to a delightful afternoon of Peter Pan in a theater full of elementary students.

Almost everyone is familiar with the story of Peter Pan, the boy who never grows up, who takes Wendy and her brothers on a magical adventure to Neverland, a land of pirates, fairies, lost boys, and a Native tribe. The enchanting ballet is action packed, with high flying adventure, fighting, mild romance, and plenty of stage magic. Peter Pan is an excellent ballet to introduce the world of dance to children of all ages, and maybe reintroduce it to the child in all of us.

Peter Pan is originally choreographed by Michael Pink, who also choreographed Colorado Ballet’s Dracula. Colorado Ballet debuted the production in 2012, though it was first performed in 2010 at Milwaukee Ballet, of which Pink is the Artistic Director. It is loved by audiences, selling out quickly – possibly because of a shortened run; while The Nutcracker run had 26 performance dates, Peter Pan only has 9. Music was created especially for this ballet by Phillip Feeney and is performed by the Colorado Ballet Orchestra, with accompaniment by the Colorado Children’s Chorale. 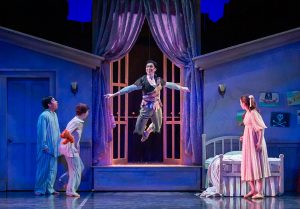 One of the special challenges of performing this ballet is the trick of flying. The characters of Wendy, Michael, John, and Peter Pan each log some flight time, with the most extensive feats performed by Peter’s character. Our group’s afternoon experience was enhanced by a backstage tour, where we saw the rope and pulley systems that lift the dancers high above the stage; the flying effects in Peter Pan are provided by ZFX, Inc. A video on the Colorado Ballet website shows dancer Kevin Gael Thomas discussing how he and Francisco Esteves pull off that magic.

The dancers alternate performing the role of Peter with being backstage to call cues to the technicians lifting the onstage Peter. The flying that looks easy and natural onstage requires the precise coordination of at least four people. The dancers must learn to use their bodies in unique ways to create this wonderful fantasy of flight. Some of the more fantastical flight moments include Peter and the Darling children flying over London as they pass Big Ben and the Tower of London, and some of Pan’s antics, such as standing on Hook’s blade.

Also seen backstage was the gorgeous and intricate set piece of Captain Hook’s pirate ship. This large piece is cleverly designed by Rick Graham (Peter Pan Scenic Design) to be climbed by the dancers, glide across the stage, and be turned about to show both the outside of the ship and the rooms below deck. All of this shifting scenery is beautifully choreographed into the story. I appreciated a glimpse into the inner workings of the stage artistry which, we are told, is often done by other dancers helping out. 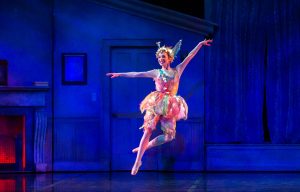 Each of the beloved characters are brought wonderfully to life by the cast. The Tic Toc croc makes a wonderful, if brief appearance. The family dog, Nana is endearingly portrayed. Fernanda Oliveira’s Tiger Lily (alternatively danced by Asuka Sasaki) has powerful presence. Nicolas Pelletier (alternatively danced by Christophor Moulton) plays a dual role of Mr. Darling and Captain Hook, a clever contrivance, as Mr. Darling is a little bit of a bad guy in act one.

My daughter was particularly charmed by the mischievous and feisty Tinkerbell. Her twinkling, light-up costume offered a new, non-Disney image to the familiar fairy. Kicking Peter in the shins, sticking her tongue out at the audience, and laughing after shooting Wendy from the sky, she’s quite impish, and played adorably by Mackenzie Dessens (alternatively danced by Leah McFadden). The children of the audience get a chance to interact with Tink by waving magic wands to bring her back to life.

We caught a glimpse of the dancer backstage during our intermission tour as she scampered fae-ishly across the stage. I commented to our tour guide that she was staying in character, to which she replied that Mackenzie is just that fae in real life. Later that night, taken by the fairy’s naughty charms, our generally agreeable child perplexed her father by sticking her tongue out at him at bedtime.

Though I was captivated by most of the performance, a few issues grabbed my attention. Before going into the theater, I wondered how the story and appearance of Tiger Lily would be addressed in these current times, when we should all be aware of the issues facing Native people – and particularly Native women – who are missing and murdered at an alarming rate. Peter Pan was written in 1911 and is riddled with racism regarding Native representation. Some of today’s theater companies grapple with how to present the story while also honoring Native people.

In Colorado Ballet’s production, I appreciated that Tiger Lily and her tribe of all women were depicted as brave and independent, fighting off the pirates on their own. Their costumes seemed skimpy and exotified in relation to traditional regalia and clothing, and compared to the costumes for the rest of the cast. A Native American woman who accompanied De La Vaca later in the evening for the final dress rehearsal found them skimpy but also well made and not plastic and cheap looking, as is wont in festivals and party representation all over, though we’d love if the costumes were made by actual Native people in appropriate fashion. 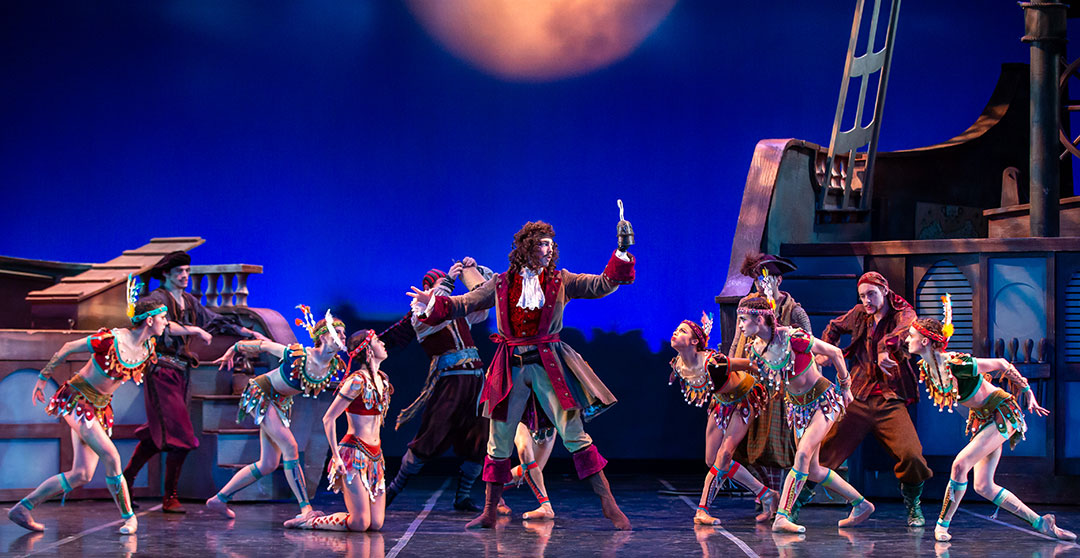 In Act 3, the Native women are captured by the pirates. They interact with their captors who seem to be celebrating, by alternately entertaining them with dances, and pushing them away. Some are then carried off into the rooms under the ship by the drinking pirates, leaving me to question what happens to them next, and whether this depiction bumps the rating of this children’s production to PG-13. When I checked in with my daughter, the nuances of this scene had gone, fortunately, over her head.

As a parent, I believe it is my responsibility to balance fantastical depictions of culture with real cultural experiences and education. Our family has attended several local PowWow gatherings, where we can witness Native people in traditional regalia that they have made, participating in traditional dances and music. We will be sure to attend more of these gatherings and discuss differences between what we see there and what was depicted on stage.

Asked about these cultural concerns, Colorado Ballet provided a statement, not dissimilar to the one Disney+ added to their recently released collection: “Colorado Ballet respects and embraces all cultures. This story is an adaptation of the Peter Pan novel originally published in 1902 by J.M. Barrie and may contain cultural depictions that were common during that era.”

Peter Pan captivates, with all the daring your childhood self remembers, brought to life brilliantly yet again, with explosions sure to startle, leaps into imagination guaranteed to make you crane your neck, and emotion enough to make you weepy. Make sure to see Peter Pan by the Colorado Ballet. Bring your sense of wonder with you.

You can catch a performance of Peter Pan at the Ellie Caulkins Opera House from now until February 9. The Colorado Ballet is also hosting A Night in Neverland: A Colorado Ballet Gala on Thursday, February 6, 2020 at the Ellie Caulkins Opera House. Check it out online and make sure to attend this very exclusive trip to Neverland. PowWow gatherings in Colorado can be attended throughout the year. 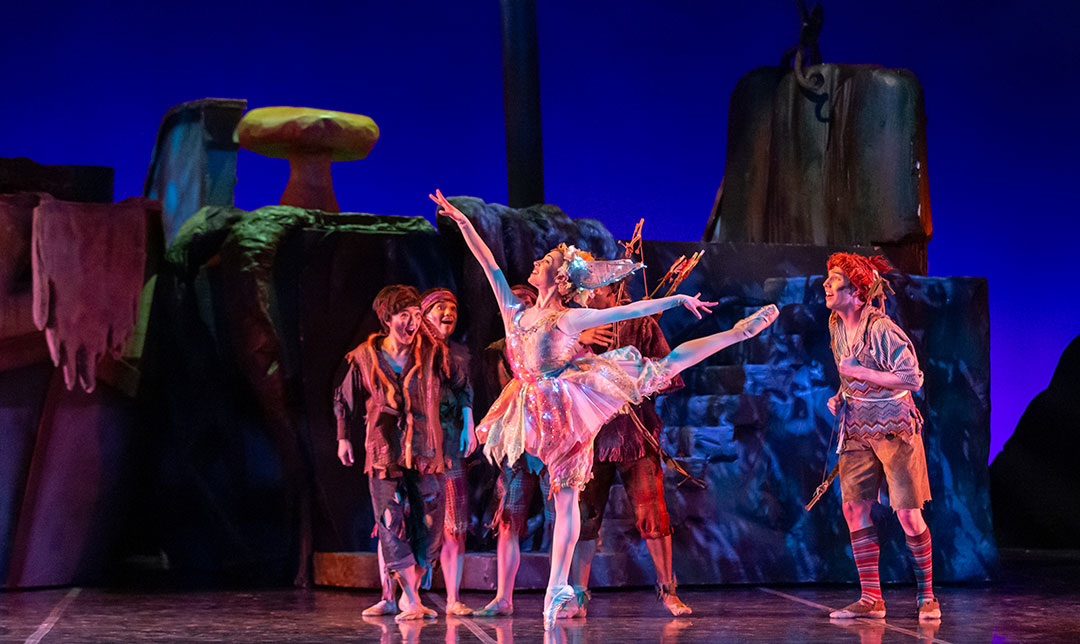 Leah McFadden and Artists of the Colorado Ballet by Mike Watson 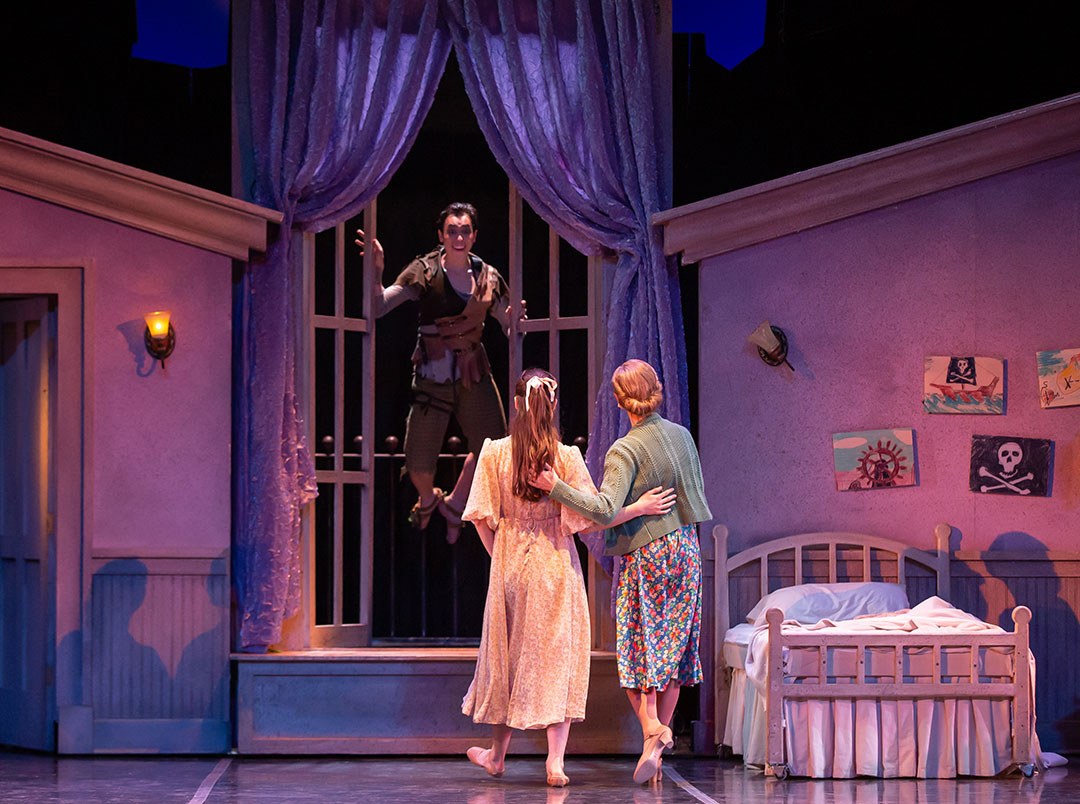 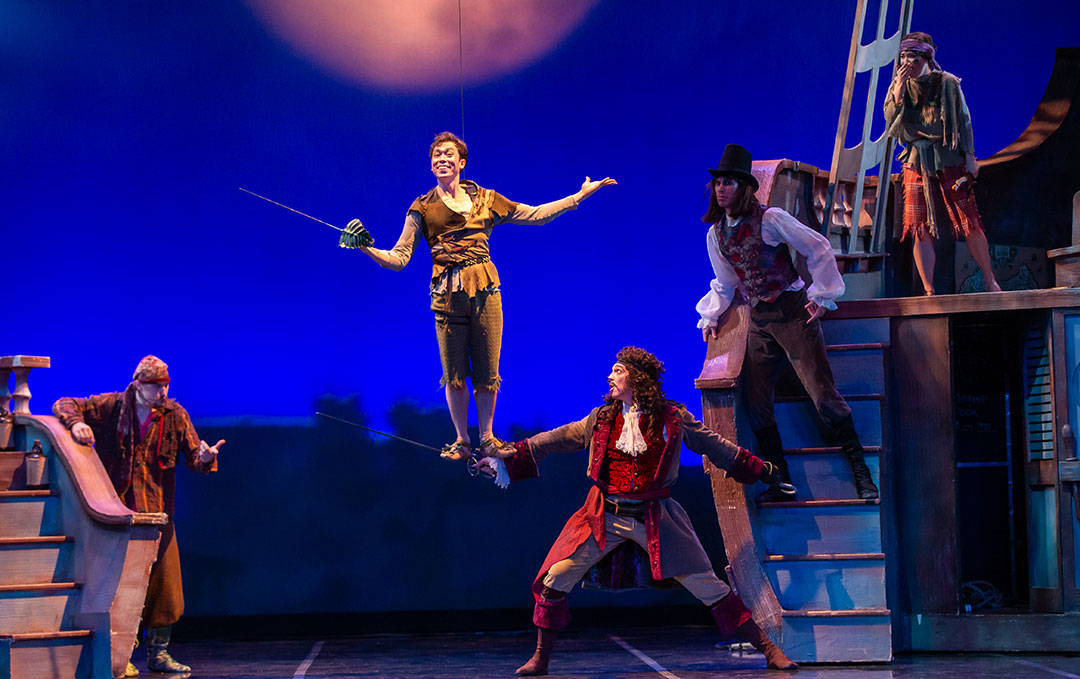 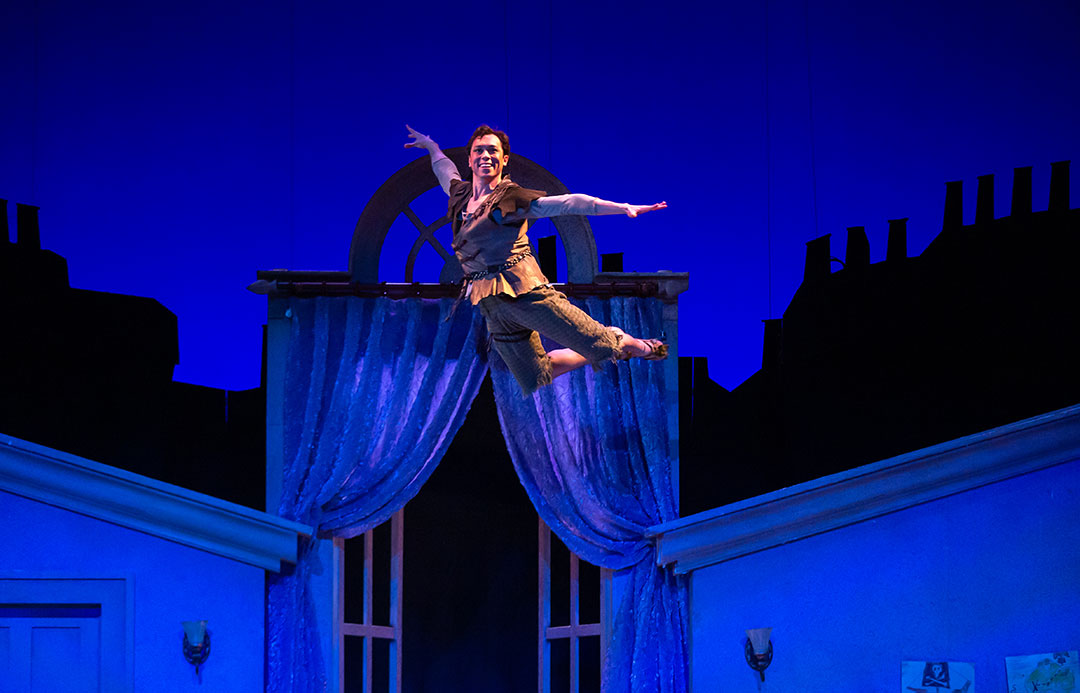 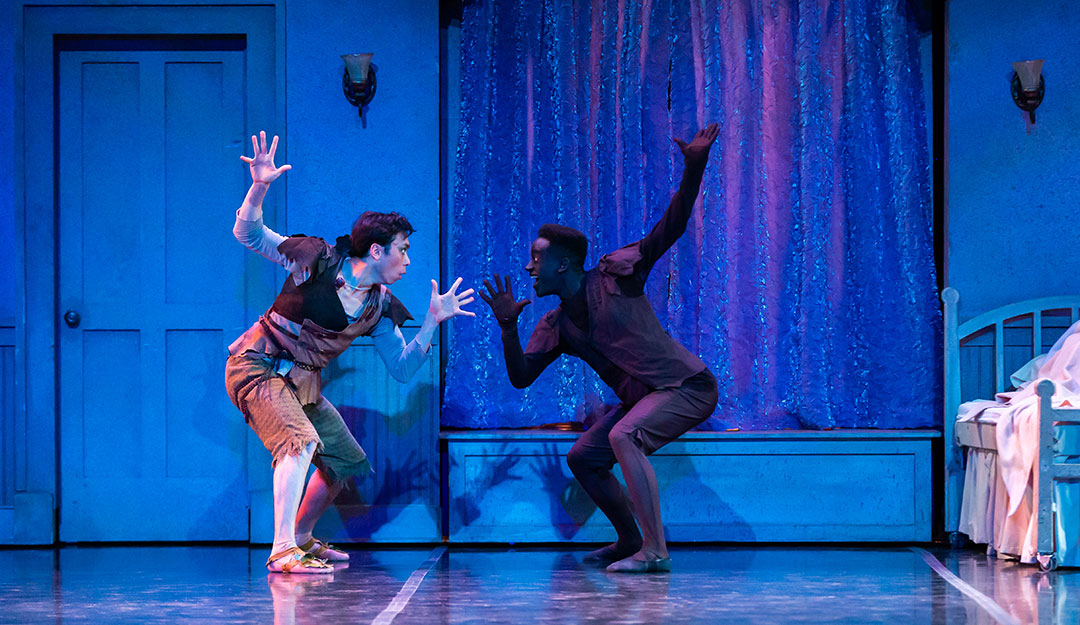 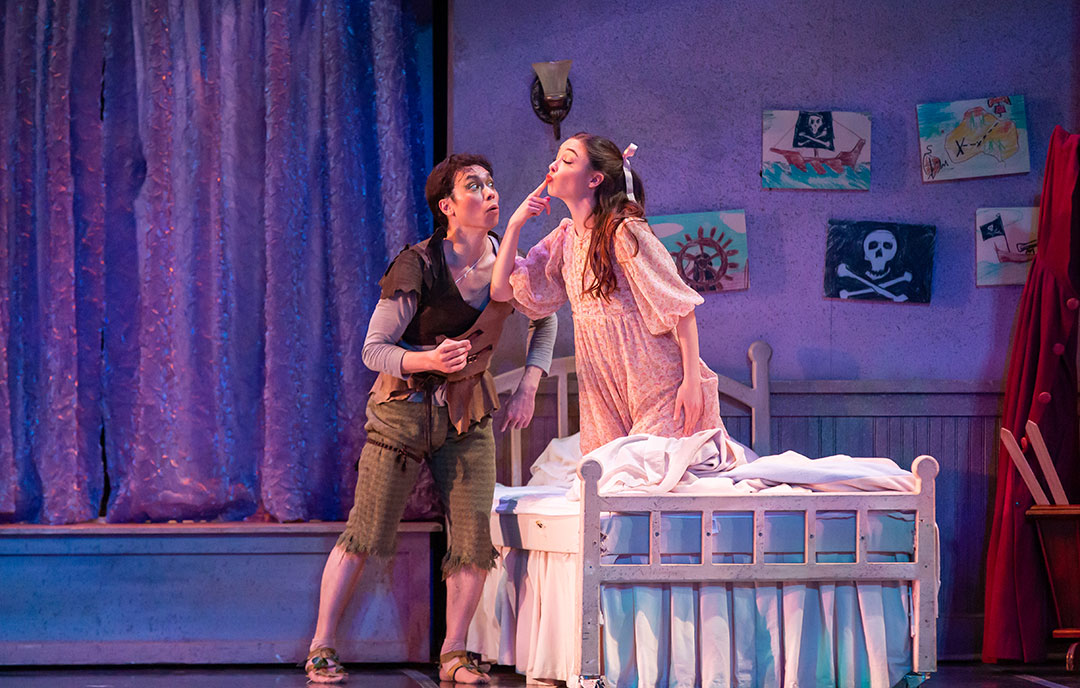 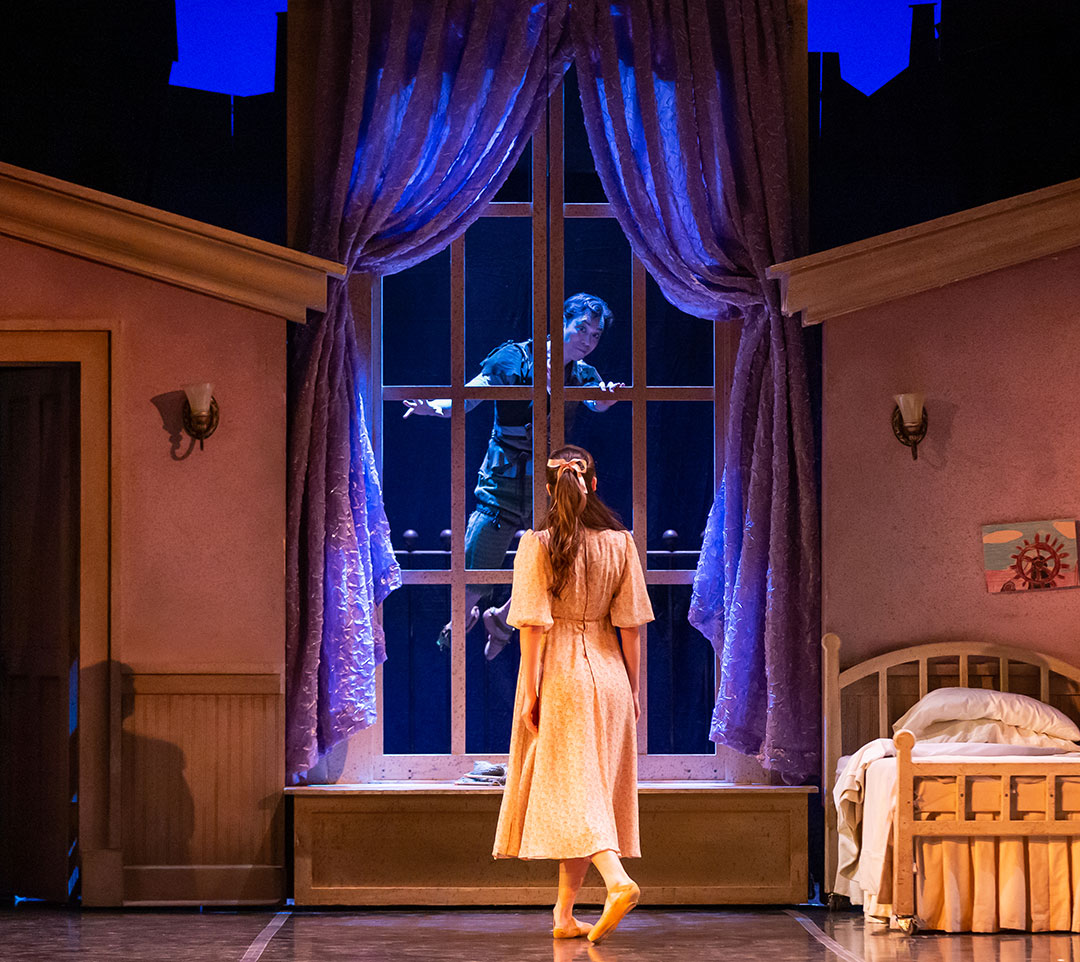 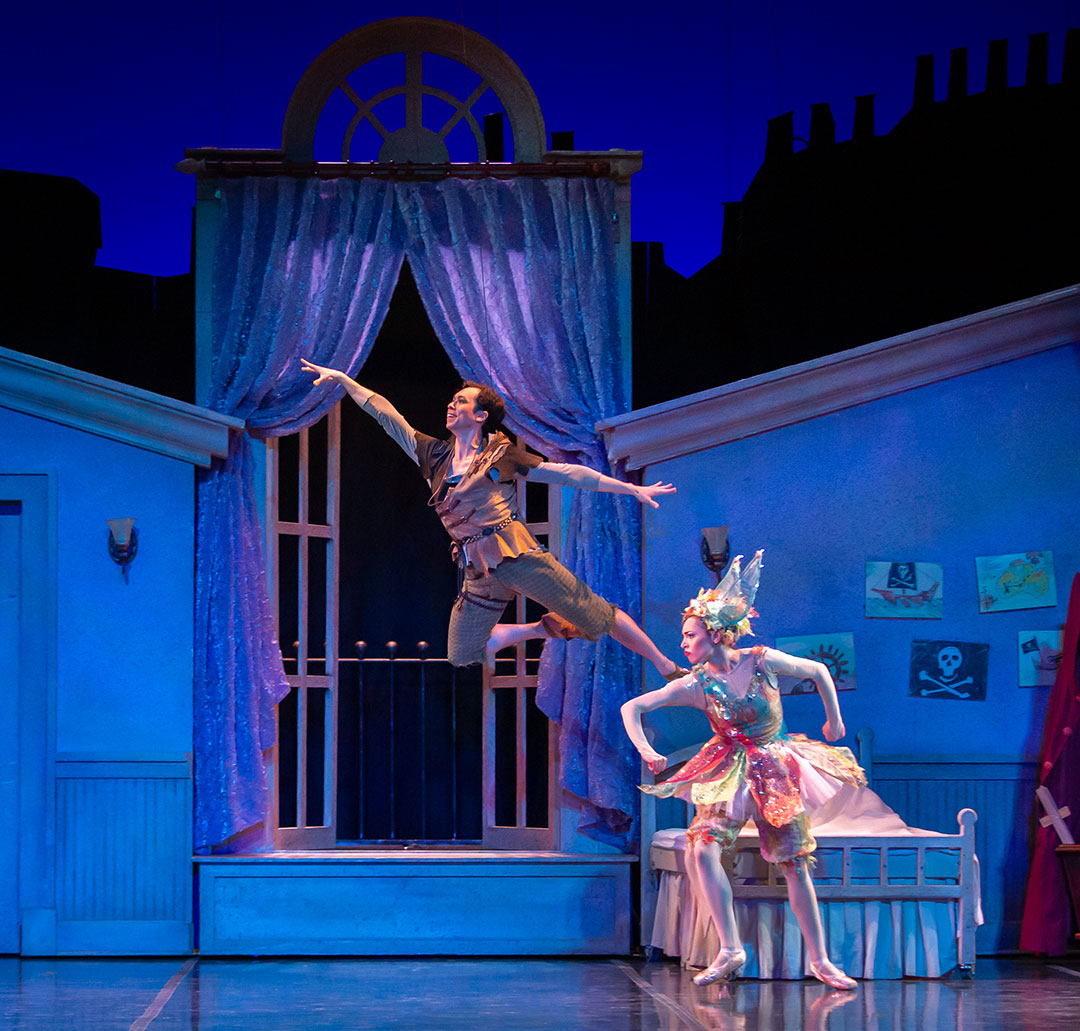 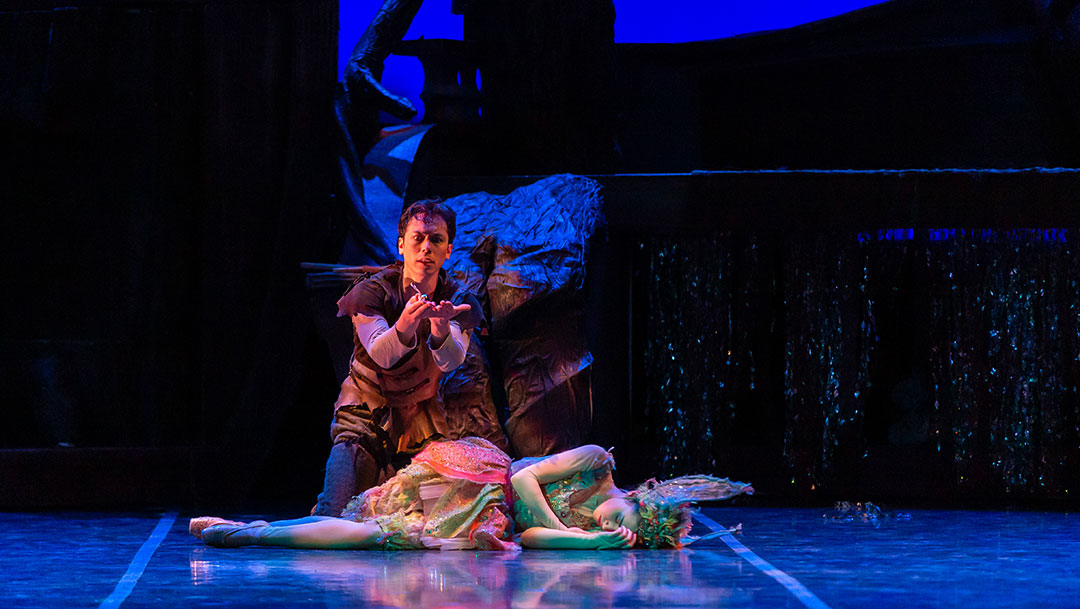 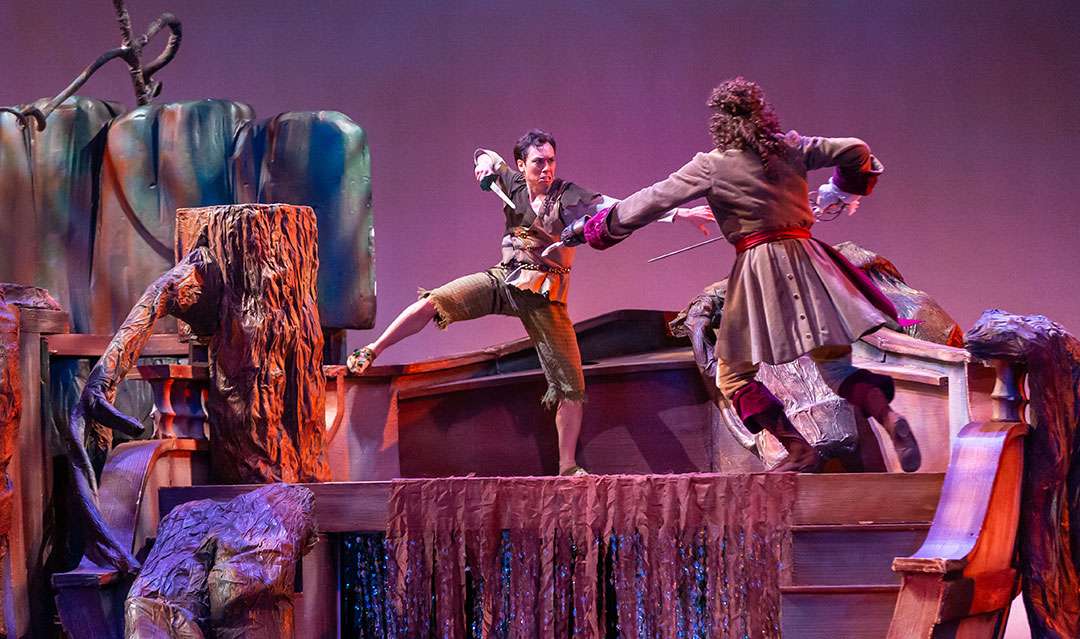 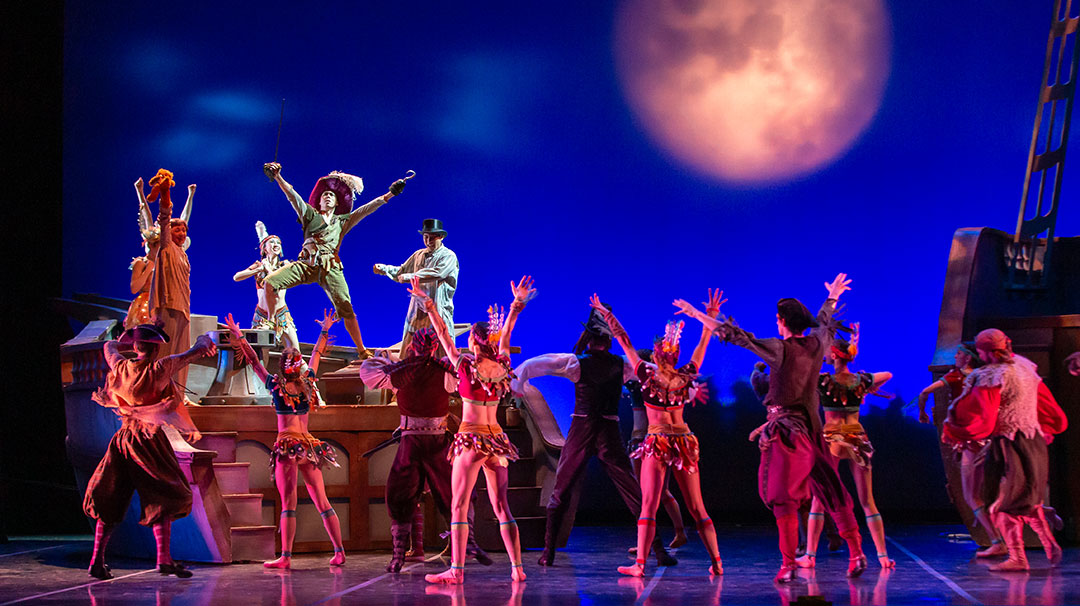 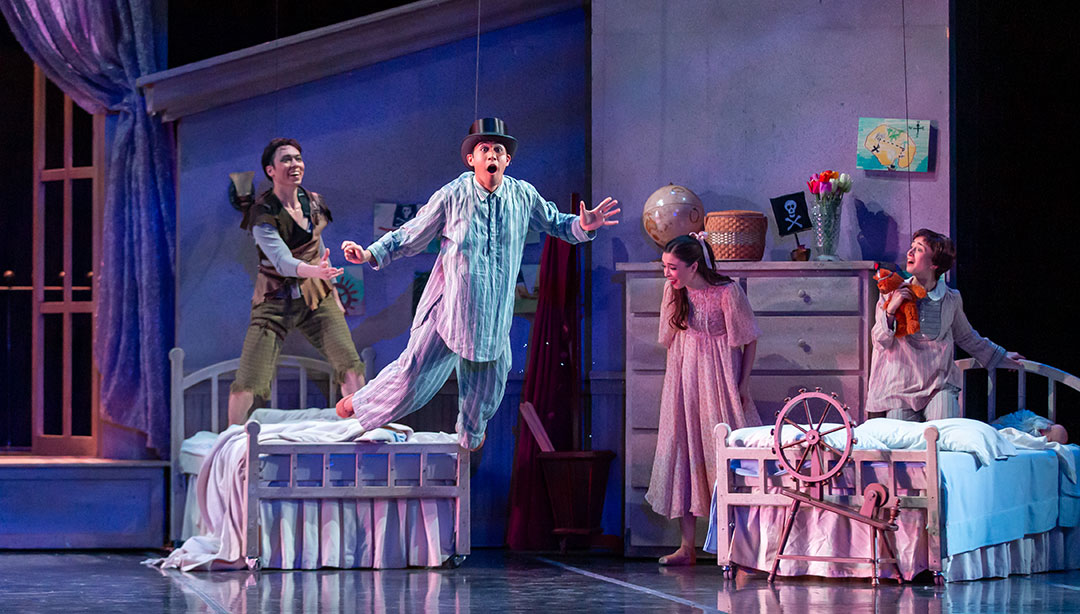 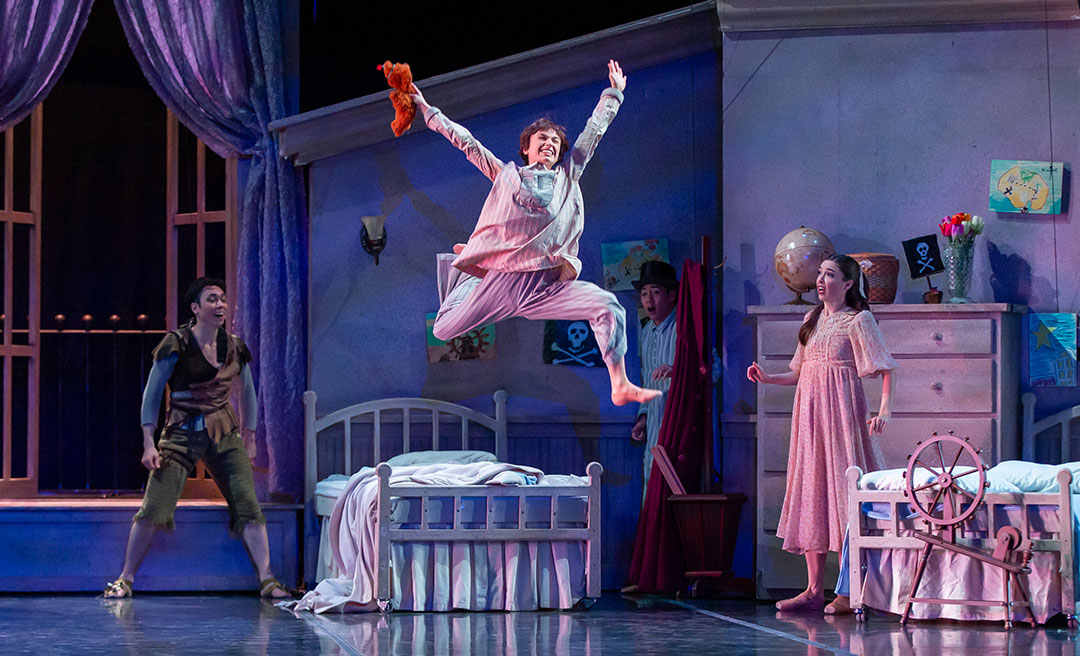 Arianna Ciccarelli and Artists of Colorado Ballet by Mike Watson