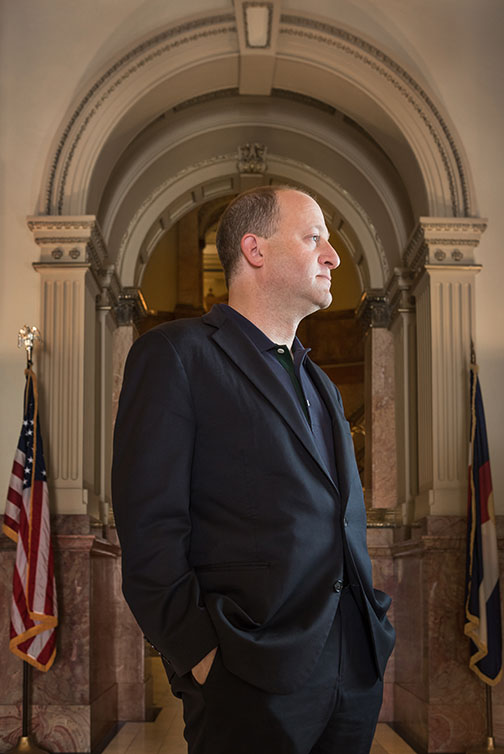 A DiverCity conversation with the man who runs the state, the preeminent Boulder democrat and business wunderkind working on tackling major state issues, including healthcare, energy and environment, and education. He’s only seven months in, and not even close to done.

Governor Jared Polis. Born in 1975. A graduate of Princeton. A man who started his first business while in high school. A gay man who had to come out twice, but we’ll get to that.

I interviewed Governor Polis in the capitol building on a warm August day, about two months before our deadline; he’s a busy man. A hurried 17 minutes and 28 seconds after we shook hands, we were done, having moved between four different shoot locations with a coterie of handlers, staff, and security escorts. In that short time, we covered childhood, business, healthcare, identity, and the lack of diversity in Boulder.

Born in Boulder Community Hospital in 1975 – now a young, if serious, 44 years old serving as the 43rd Governor of the state of Colorado – his political involvement stretches back to early years in La Jolla, CA, a beautiful and pricey seaside enclave in southern California. The then Jared Schutz, “an 11-year-old with a high-pitched voice, skipping school to address the city council” was “in a hurry”.

When a condo developer made up stories about a canyon he played in, he spoke up to defend the open space. “He spoke for about 10 minutes, and the council later surprised everyone by siding with Jared. The local newspaper quoted the mayor saying it was ‘that young man’s speech that made the difference.’” When I asked him about that past, he says, “I’m not someone that sits on the sidelines. I’m somebody that likes to make a change,” before adding, “we want to create a real exciting future for all Coloradans and a Colorado for all, that provides opportunities for everyone, regardless” of their identity.

As the second LGBT governor in the United States, after Kate Brown of Oregon, he was “probably 20, 21, something like that, when I told my parents.” That’s not much of a coming out story. It’s actually kinda nice that he’s so casual about it. It shouldn’t be a big deal. He had gone to Princeton at 16 and graduated before he even told his parent’s.

He had also started his first business before coming out, “American Information Systems, while in college out of his dorm room. By the time he was 30, he’d launched three successful companies, including ProFlowers, one of the world’s leading online flower retailers,” his official website states.

“I like to challenge myself,” he says of his time at Princeton, “to do great things for our community and for the world.”

Coming out to his parents was his personal coming out, a more private affair. “When I was thinking of running for Congress I had to do more of a public coming out, rather than just waiting to be asked … which was a strange thing to have to do.” That was his second coming out, around 2006.

For being just the second LGBT governor in US history, surprisingly, he doesn’t think his identity really impacts his work, saying, “ I think it’s good to have elected officials that have walked in the shoes of others in our state … but of course, in the day to day decisions … it has very little impact.” 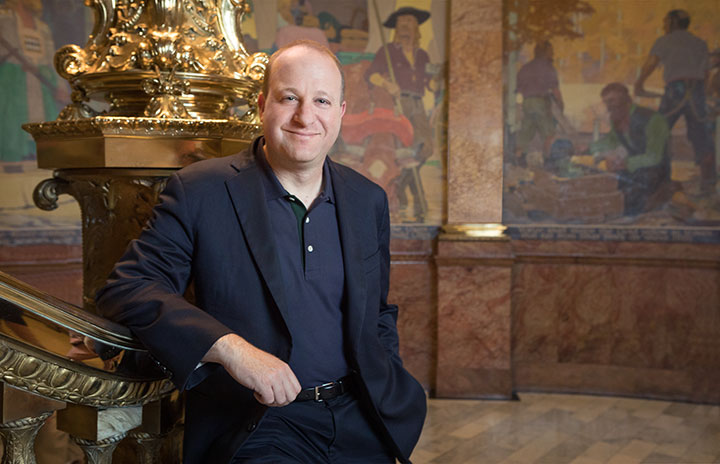 But identity does matter. It affects representation, which affects policy. Diversity matters, and Colorado is not very diverse. Stats show that our state is White: 84.18 percent, a failure of reporting when Hispanic residents (a full 20 percent on their own) are subsumed in the White category per Federal standards.

Around the 9 minute mark, the governor returned to his talking points: Healthcare savings for Coloradans, including the alliance model (an update to his consortium idea) and prescription importation are set to save Coloradans money.

On SB 19-181, in regard to a Colorado Rising legal actions in Longmont, he says, “I embrace the concept of local control across many areas. I think that communities should be able to chart their own destinies.” Notice the use of the word “concept”. It’s important, when discussing a law that many environmental activists have called toothless and which is being actively undermined by oil and gas agreements with the COGCC to push through and approve as many new wells as possible. A statewide moratorium on new approvals until the rule-making process is complete would be actual local control. If we’re discussing politics…but I digress.

Returning to the topic of diversity, Governor Polis says, “Boulder is a community that values diversity but often finds itself not having enough of it. There’s been an ongoing challenge in the city of Boulder, and surrounding communities, for housing that’s affordable … and so it’s a community that always struggles with itself. It certainly values different cultures, different heritages, often celebrates and tries to bring those experiences to residents. And it’s also part of the greater Denver area, where we have such rich cultural heritage.”

I asked him if he was going to run for governor again. “Oh… I just got elected. We’re seven months in,” he laughs. I didn’t hear a no. “We’re very focused on what we’re doing: saving people money in healthcare, early childhood opportunity and access, renewable energy and protecting our environment”.

In the great progressive state debate, our lovely Colorado may be the only one keeping up with California. That is a testament to the efforts of Governor Polis, and a blue sweep in 2018 rejecting Trumpism. While more needs to be done here, we’re glad we have Polis in the statehouse leading the way.