Lana Del Rey Impresses the Loyal, Others less so | Review

All images by Paul Wedlake for Yellow Scene Magazine

Lana Del Rey brought leg three of her Norman Rockwell Tour, supporting her album of the same name, to a sold out Bellco Theater on November 4th. She had support from Ben Gibbard and Julia Jacklin. Del Rey performed to a sold out crowd of what appeared to be a very age diverse audience who were clearly, utterly devoted Lana Del Rey fans.

Let me be clear: devoted. Lana Del Rey. fans. This fact was evidenced, in part, by a delayed start time, Del Rey told the crowd when she came on stage almost a half hour after the planned start time, because they were waiting on everybody to get in the room. Many skipped the opener, lingering in the foyer and bar areas where, even before the show, hundreds of people visited the line for merchandise. This, even though Ben Gibbard, a world famous musician notable for his work with Death Cab for Cutie and Iron & Wine, was the surprise opener, announced by Live Nation via email a few hours before the event start time. 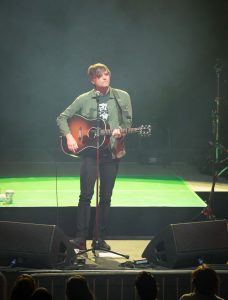 Ben Gibbard is a man that could sell out arenas on his own, and has, but he didn’t have a serious coterie of devotees in Bellco, though there were dozens throughout the room who were fans, including me. As is Colorado tradition, the music scene crowd was very generous, which makes us proud on the daily. To be fair, I found the final song of this set, and a duet he performed later with Del Rey, his most important and engaging. The majority of his set was exceedingly downtempo, more so than Lana Del Rey, who is also downtempo. His sound also seemed off, with his guitar hitting awkward notes and generating strange feedback at points.

“I’m from Seattle,” Gibbard said near the end of his set, “but I write a lot of songs about Los Angeles. It’s a beautiful and terrible place”; it’s a sentiment I can agree with, being – at least nominally – from LA and spending many years in California. He also played a song he wrote for the Monkees – yes, those Monkees – who have a recent album, saying, “it was recorded and became one of the most bizarre world moments of my life.” The Monkees song is about a girl named Angelina…which reminds us of his love affair with Los Angeles. Maybe we’re reading too deep into it.

Gibbard closed his set with a song that’s exceptionally near my own heart, Such Great Heights, a ballad originally by the Postal Service that Iron & Wine covered in 2003. It was a love song my ex-girlfriend and I shared, and I always have it in rotation. Ugh, the heartstrings! That was a lovely, if lowkey painful way to close out his set.

Then came an interminable break.

Behind me, as I sat drinking a thankfully overpoured whiskey ginger, there were two women in their early 20’s who, it struck me, are exactly the demographic Lana Del Rey speaks to. “I think I’m the classic definition of a girl,” one girl snides to her friend, who echoes her every sentiment in that vaguely oppressive friendship ritual that’s performed among only the most dreary. “I like shopping and Starbucks and…light workouts and…pastel color palettes.” … “Omg,” her friend, for lack of a better term replies, “Me, too, can we take a selfie?” … “Of course,” the ‘classic definition of a girl’ replies, before making a dozen or so suggestions for angles and lighting use. After such Karen-level hits as, “oh my god, I feel like we’re, like, dressed appropriately, like cute, for this event, but some of these girls… *snickering and whispering*, followed by violently narcissistic paroxysms of laughter about their boyfriends’ friends folding their underwear because they left their clothes in the dryer, I wanted to turn around and tell them that Mean Girls wasn’t supposed to be an instruction manual.

Lana Del Rey’s first song was Norman Fu*king Rockwell, wafting out over the eager crowd with such outstandingly clever lines as, “God damn, man-child, you fu*ked me so good that I almost said, ‘I love you'”, set to video graphics of a typewriter, implying, what?, her methodology, or suggesting something deeper than petulant love/hate song writing for angsty pre-teens with a nominal history of sexual experience, songs written more likely in a presidential suite living room with paid writers packing data on her demographic’s current depression levels.

Someone screamed, “I love you bitch”, a phenomenon that would continue throughout the night. One young girl a few rows in front of me screamed it every 3-5 minutes, depending. Devotees. 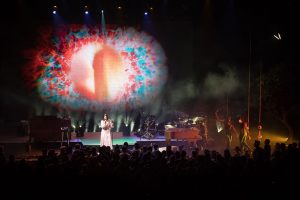 The scent of sage reached my row by the time she feebly delivered Joni Mitchell’s For Free, a song filled with such incredible grace and precision, even when Mitchell sang it playing the piano live on air, in 1970. The sage was being waved by two gorgeous back up dancers, an apparently futile attempt to ward off bad vibes and evil spirits in the audience. I was in row 305. Orchestra. That’s a lot of sage.

As an aside, can I point out that it always amuses me how much people scream when a singer squeezes a city or state name into a song. It’s not that hard. I’m not really into pandering. I wouldn’t scream for it. Anyway…

About the fourth song, Mariner’s Apartment Complex, I realized there was a definite double vocal track for cover. I’m aware that many artists layer vocals for depth but most serious singers – and Del Rey is a lauded crooner – try to let the voice speak for itself without the extra help. I found it odd. Another weird impression I had was that, on the duet with Julia Jcklin – Don’t Know How to Keep Loving You – Del Rey’s vocals sounded fake. Like, not real. There was no clearly discernible voice coming through Del Rey’s microphone for a majority of the song. Was it the acoustics? Was it the sound issues from Gabbard’s set repeating? I’m not sure, and I hate to imply she wasn’t singing. I just couldn’t hear it.

Honestly, I found the show a bit dull, even if the Del Rey devotees kept screaming “I love you” and “yesss, Bit*hhhh” and the random sections of older men occasionally standing up to stare for a bit before feeling tired and sitting again. If it weren’t for the eternally rhythmic, concentric, concurrent movements and added vocals of the backup dancers/singers, the near lazy, unengaging performance by Lana may have put me to sleep.

I’ve read a couple of the other local reviews, and I’m not a disagreeable person, but I couldn’t disagree more. Where some at 303 see “a vision of vintage American cinema, a nihilistic noir daydream of grandeur and distress”, I see an artist who has grown into her pop neo-emo persona, adored by a fan base that are attached to her ability to personify the nihilistic millennial generation, infantilized and facing a bleak future, demanding less intelligent music than is available. There’s some good in that. I don’t mind the occasionaly mindlessness or bored revelry.

Where the Westword writes that she “keeps her production simple” neither “undergoing garish outfit changes” nor putting on “ridiculous dance moves”, I see a performer that still hasn’t learned to dance with any acumen. If anything, the backup dancers who dished out some “pop glitz” were consciously there to balance her lack of rhythm and up the engagement with the crowd, an area she’s always lacked in, made up for before – and now – with a stage design including varied height levels, layers of instrument, and a seriously good light and fog show. Smoke and mirrors, as it were.

In all honesty, I left after Gabbard returned to the stage to duet another of my favorite songs, again courtesy of my ex girlfriend, “I will follow you into the dark,” by Death Cab for Cutie. Del Rey’s vocals shoot too high, trying too hard, and she mucks up the verse. Gabbard’s vocals and guitar playing were on point. Once concluded, following some decidely heroic efforts from Gabbard, I decided to leave. The show wasn’t doing it for me and, as I exited, I realized I wasn’t the only one. Many were in the foyer, many outside waiting on cars. The majority stayed for the show, a testament to the devotion and the current appeal of pop-emo.

Lana Del Rey’s performance in Denver was lackluster, filled with sound errors, low engagement, and struggles to outshine the performers she brought to accompany. For the devotees, this was more than enough. I expected more. 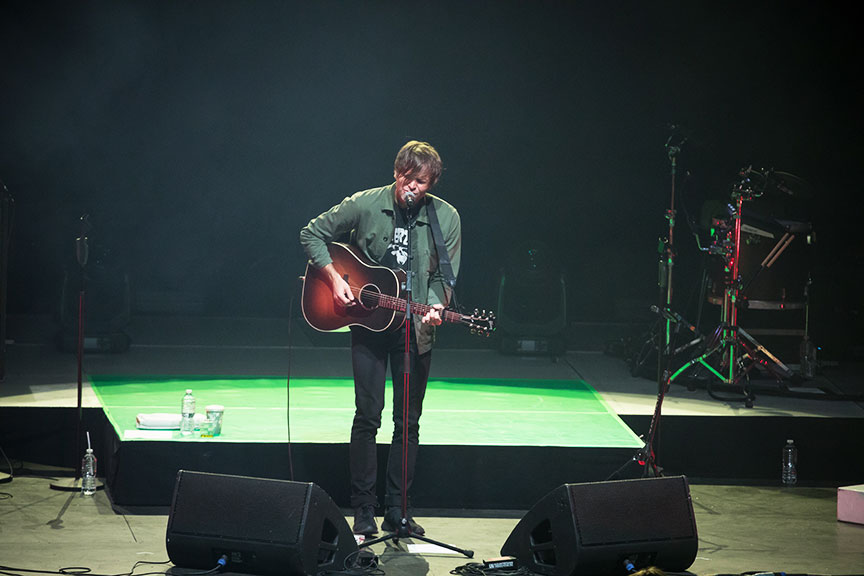 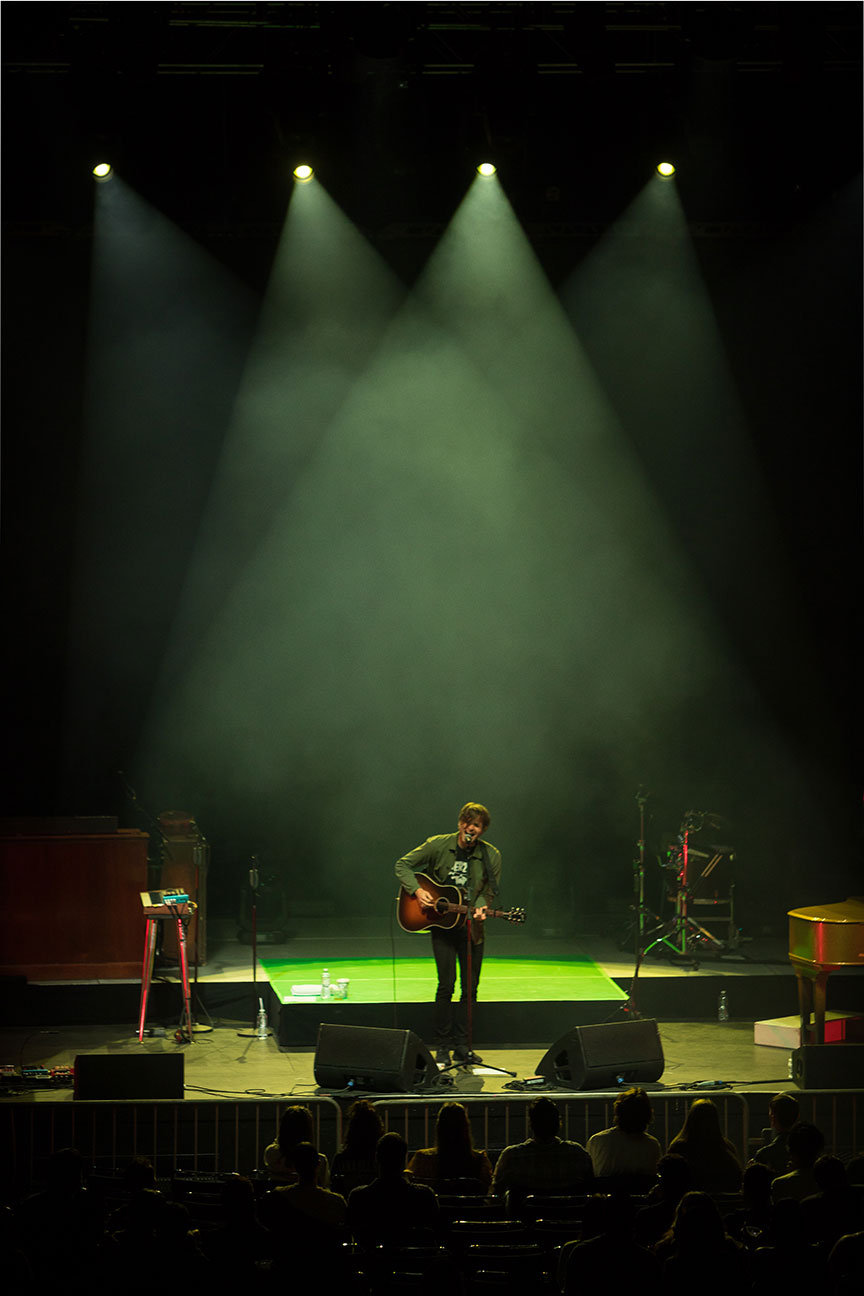 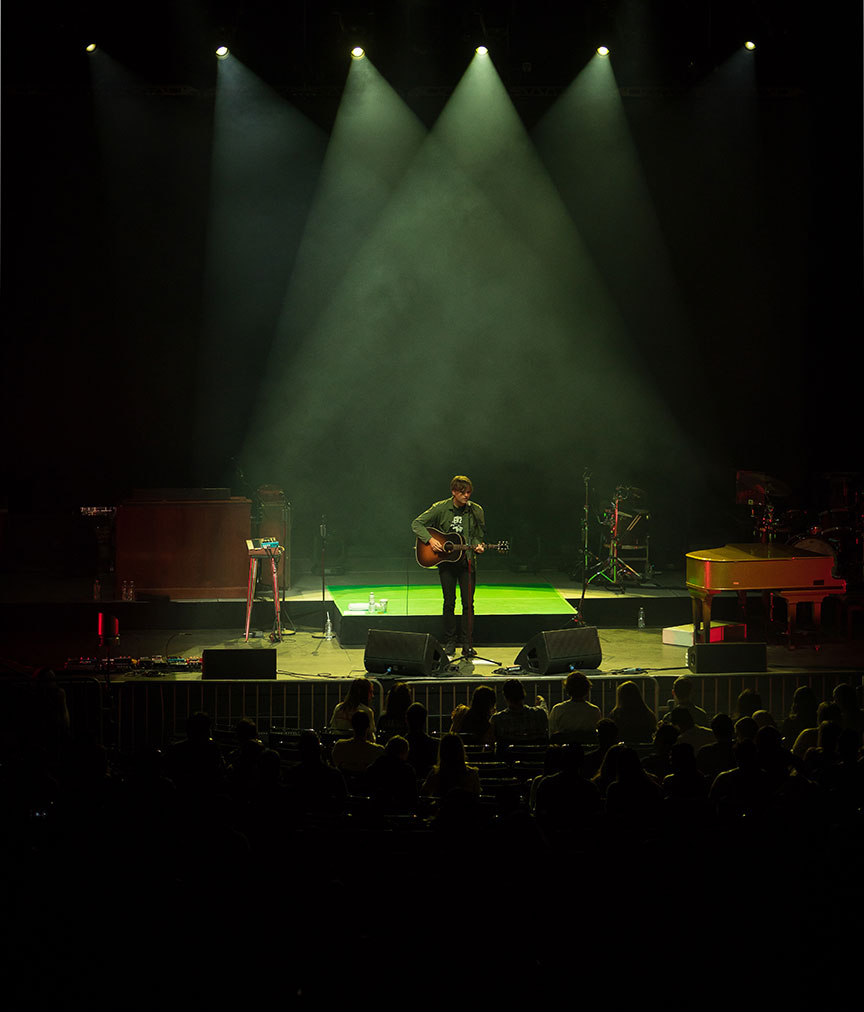 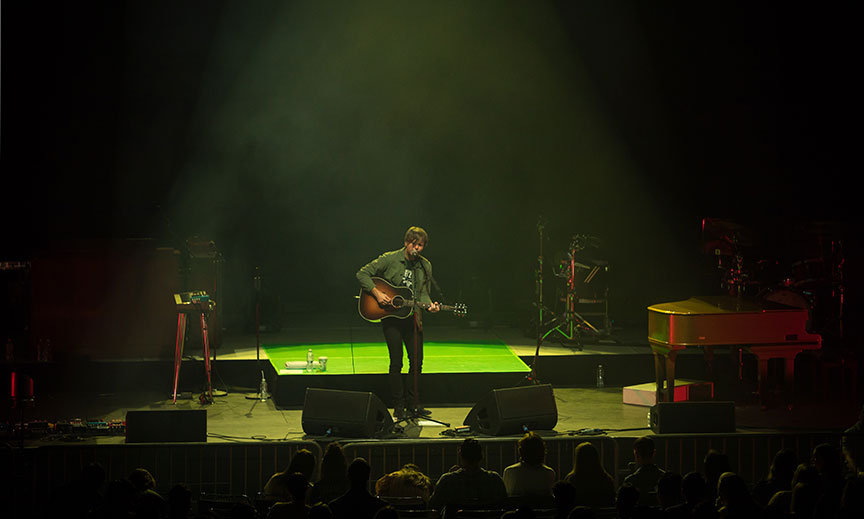 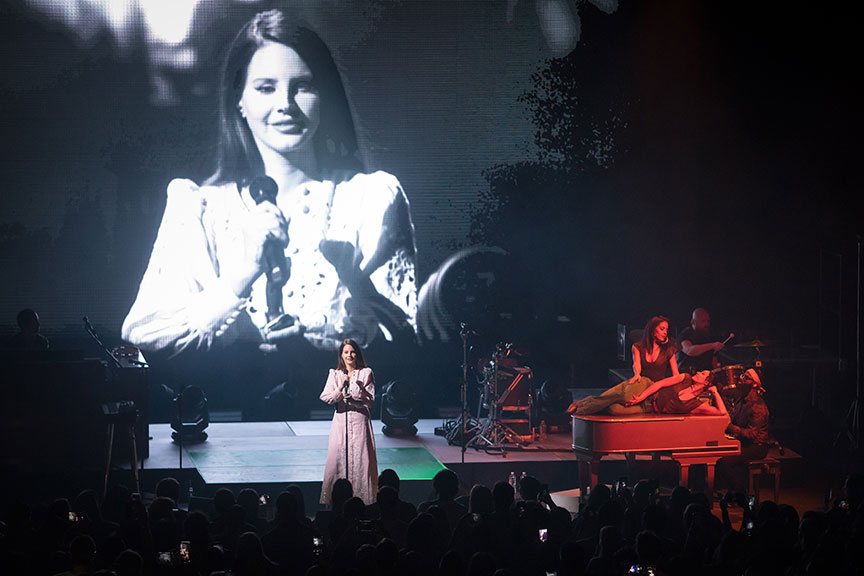 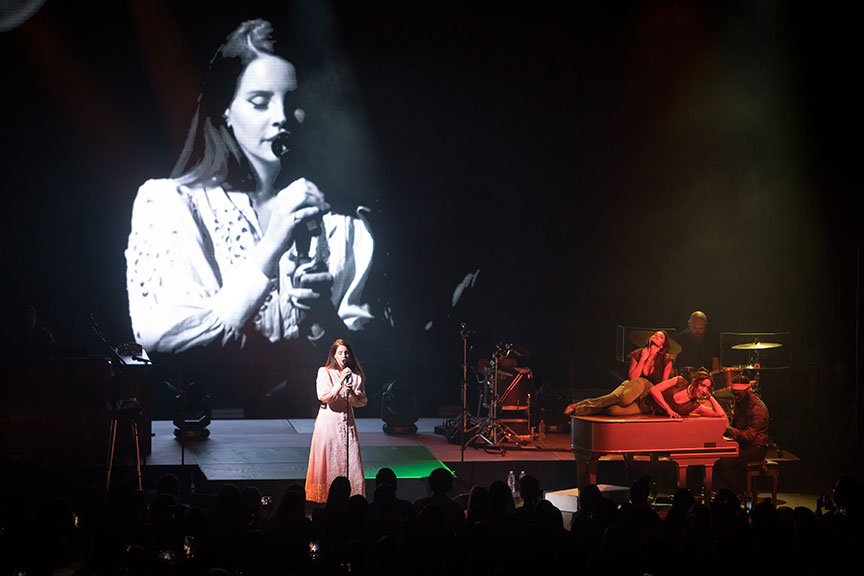 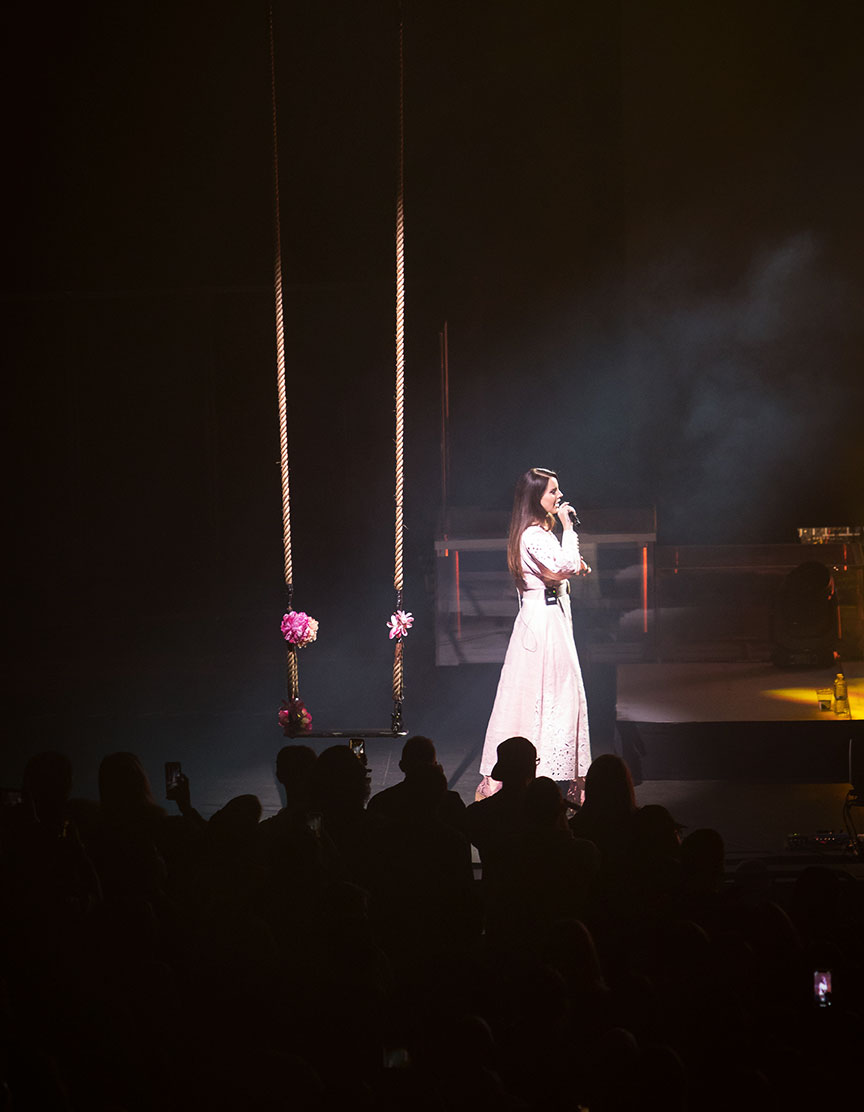 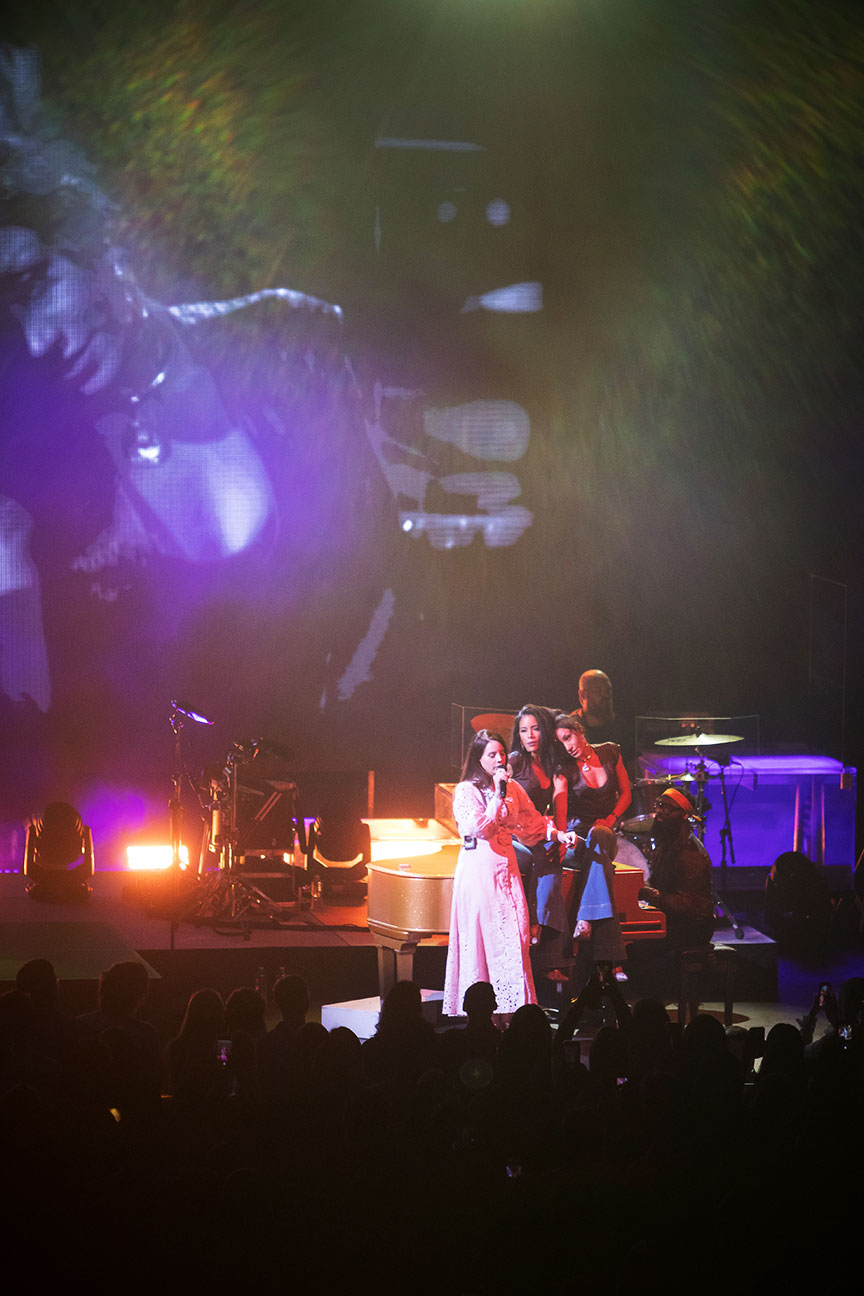 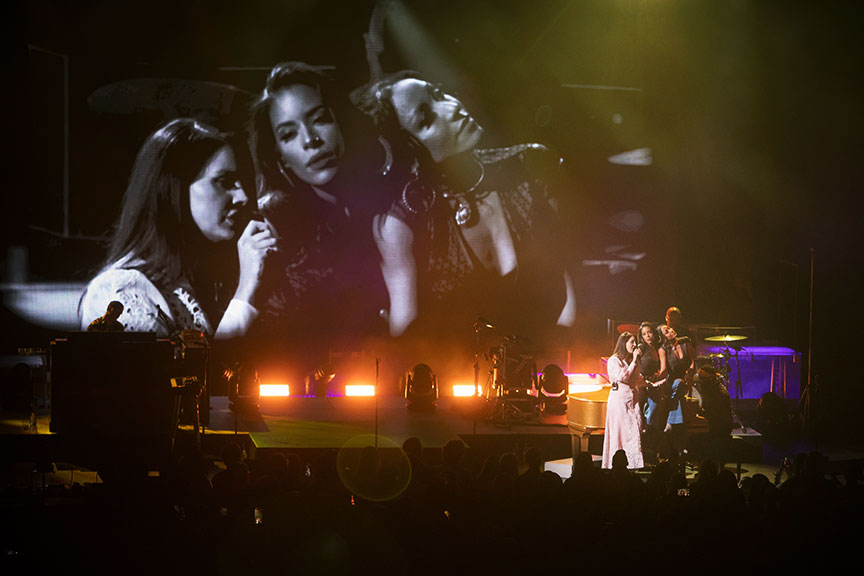 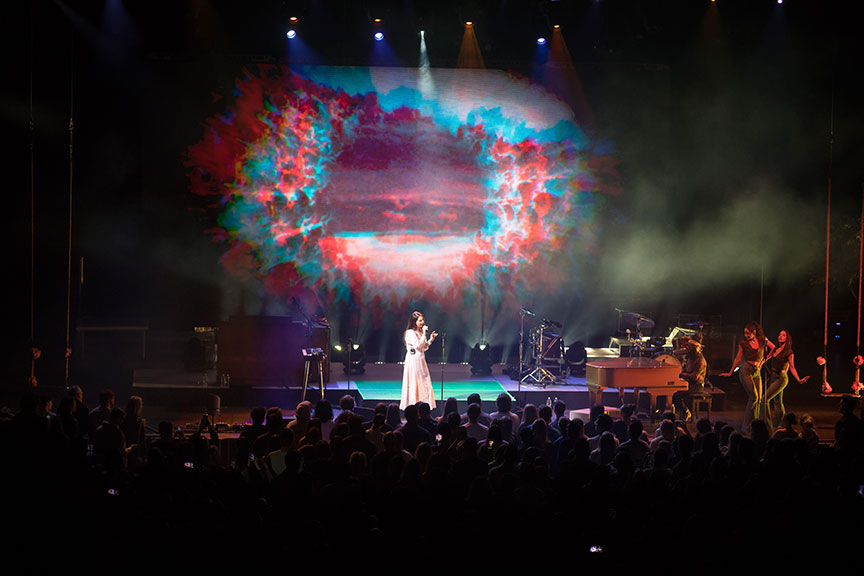 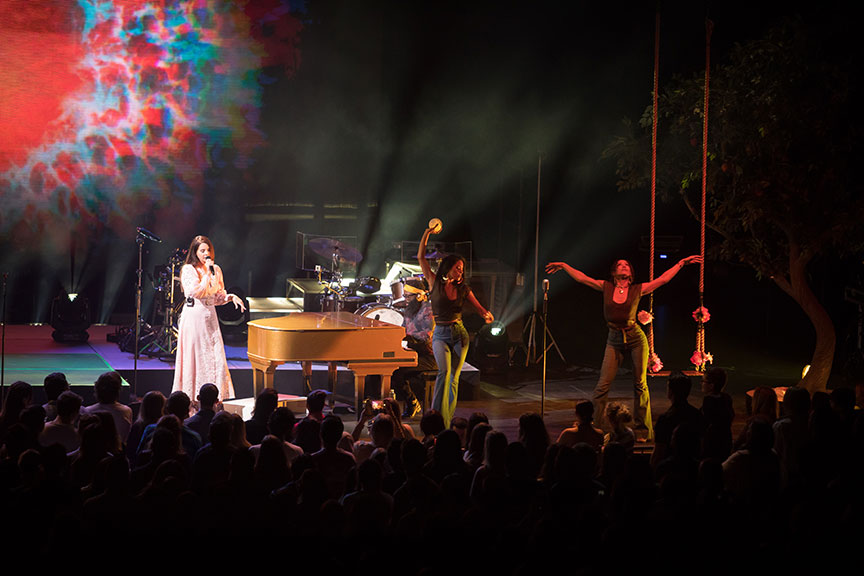 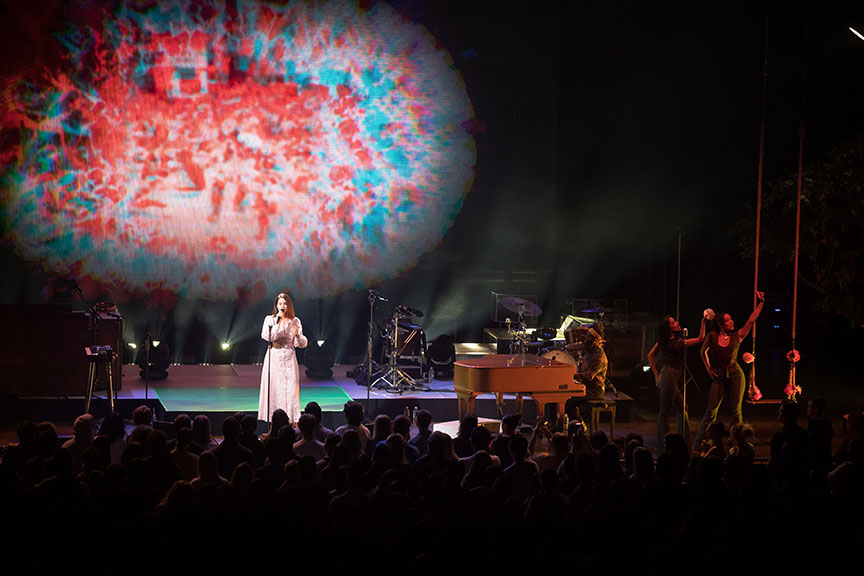 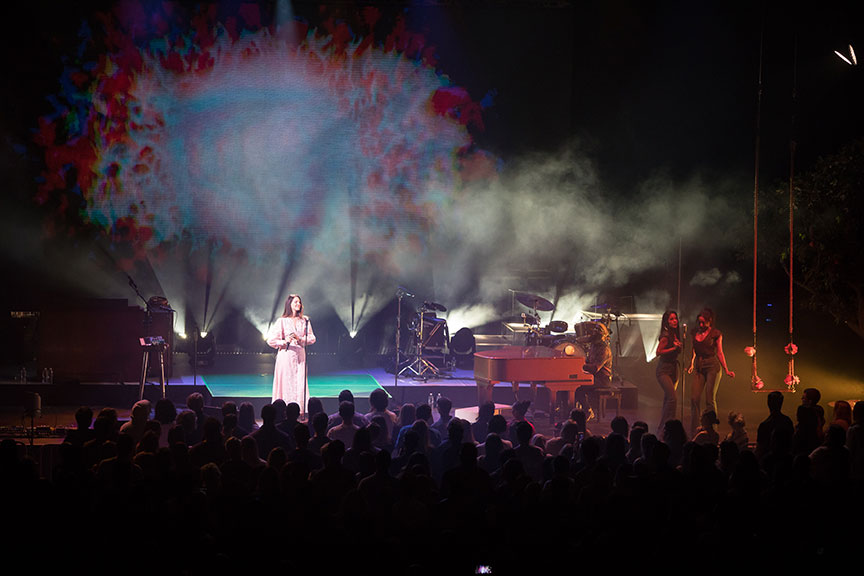 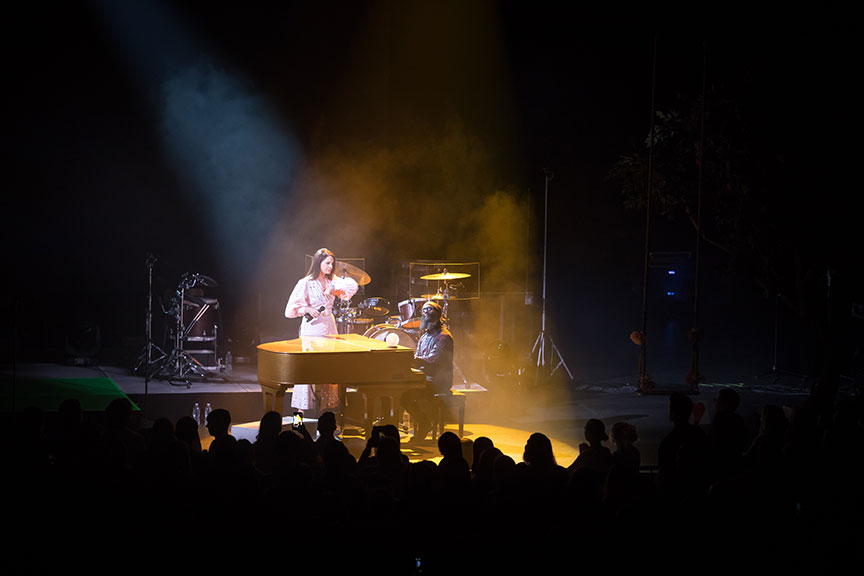 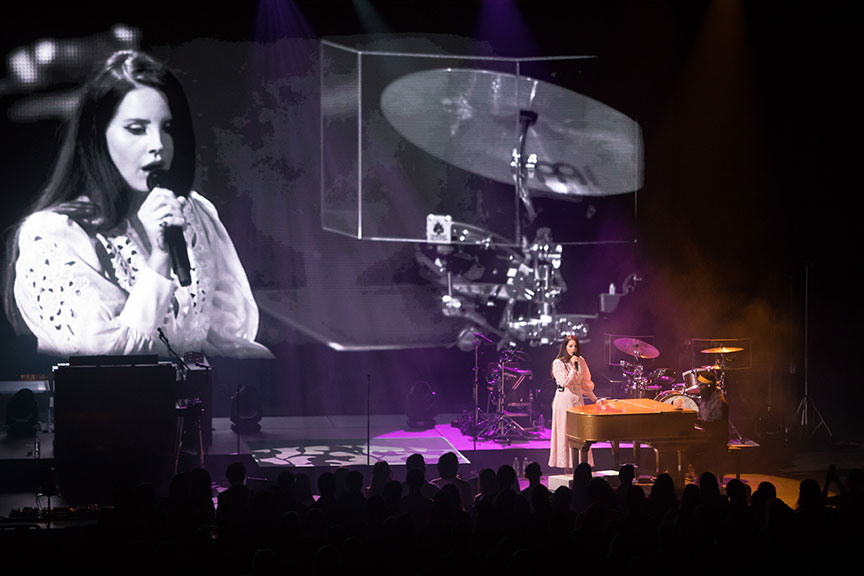 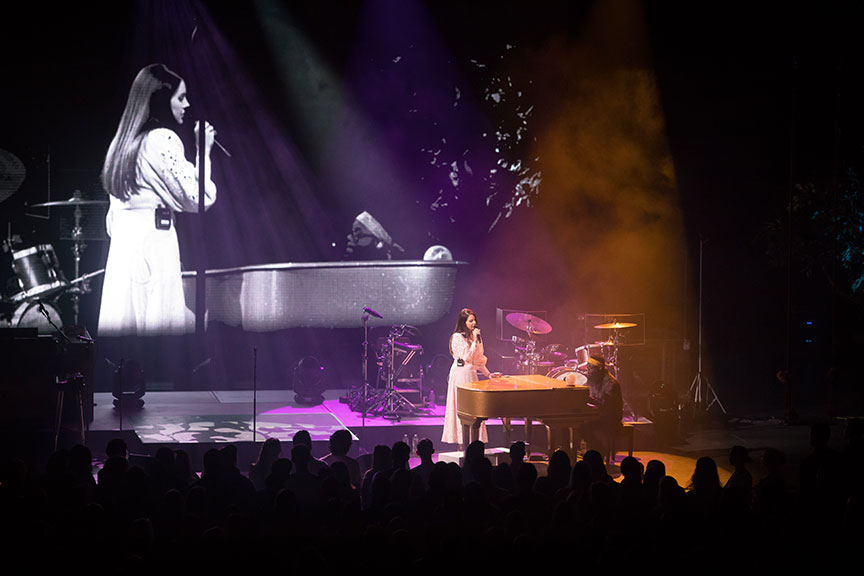 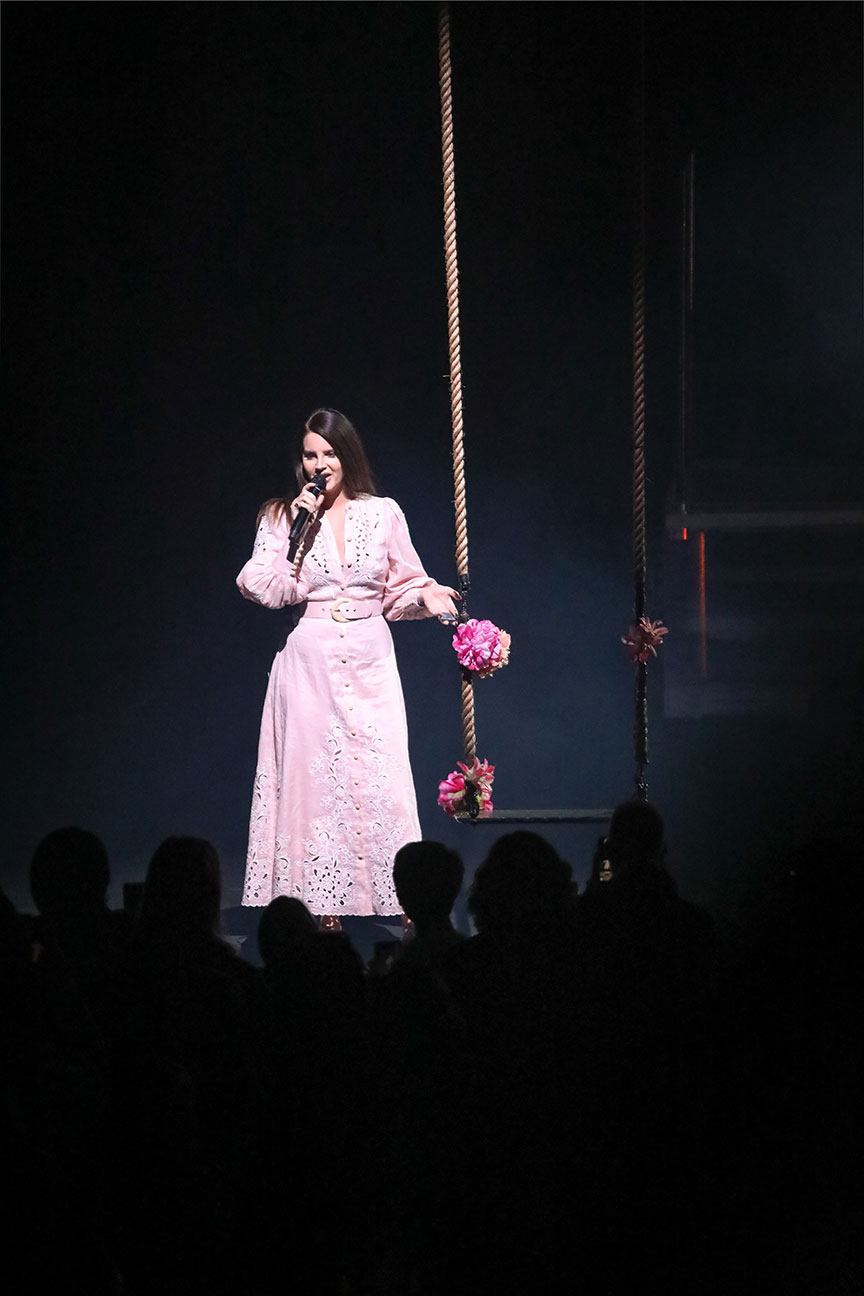 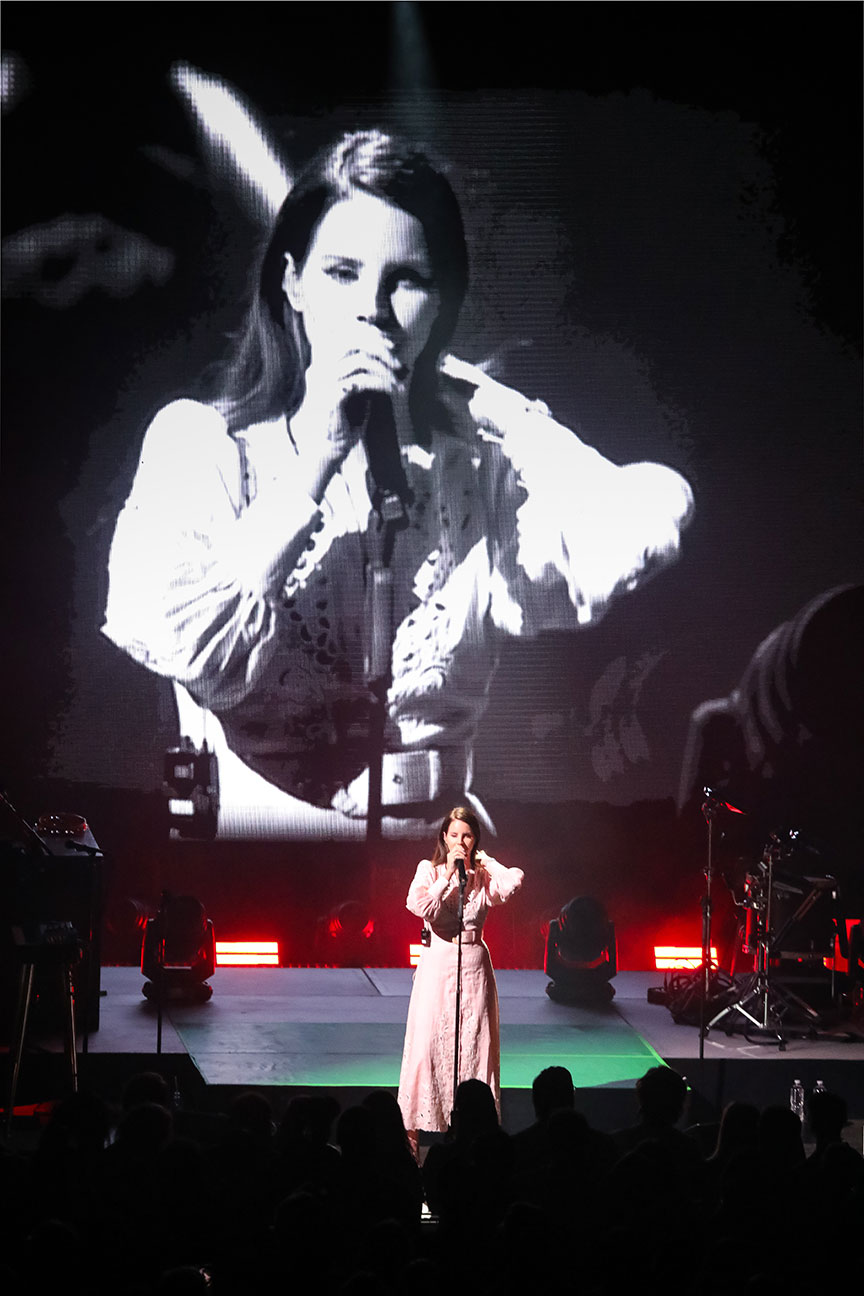 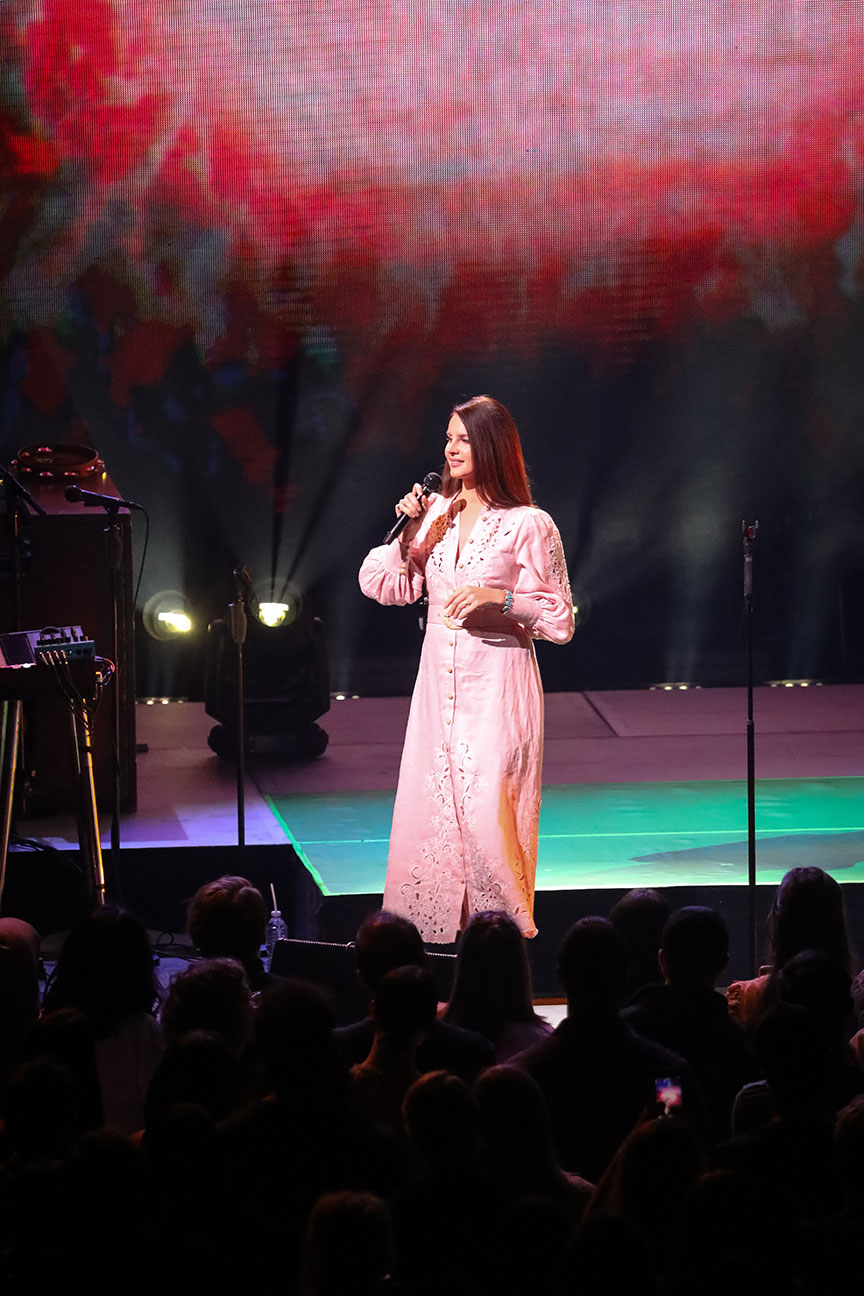 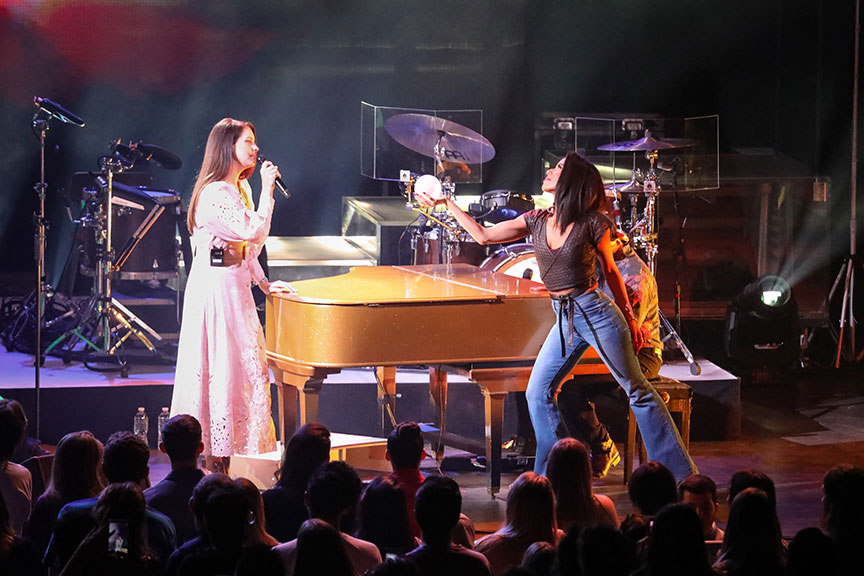 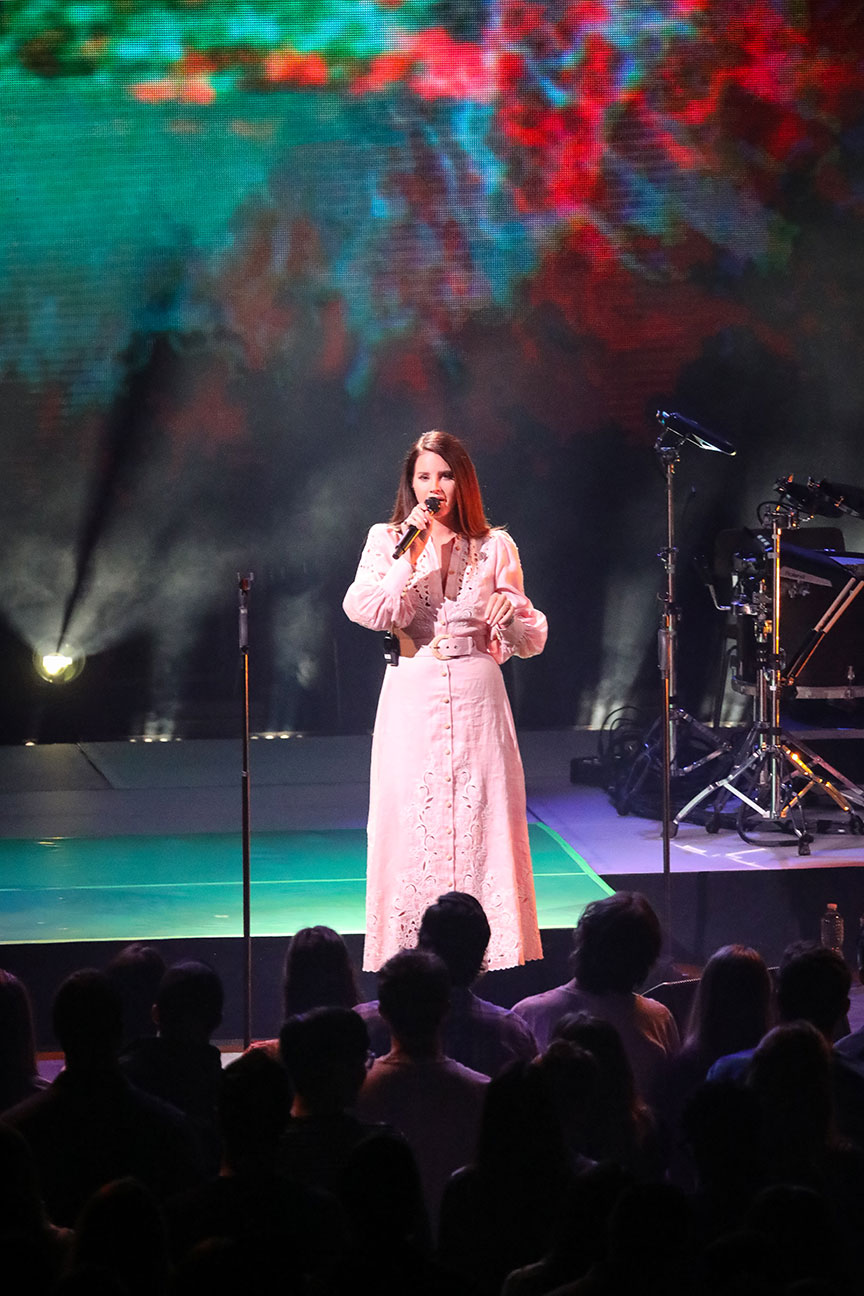 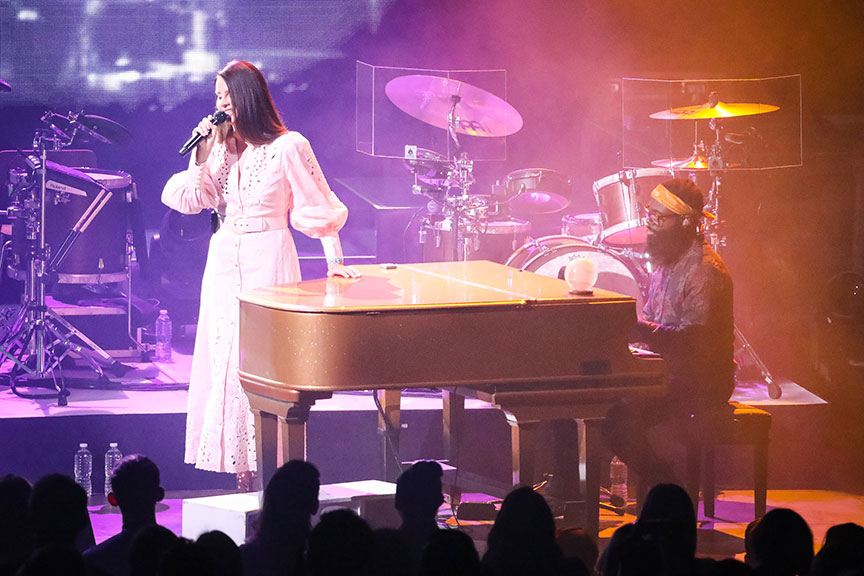 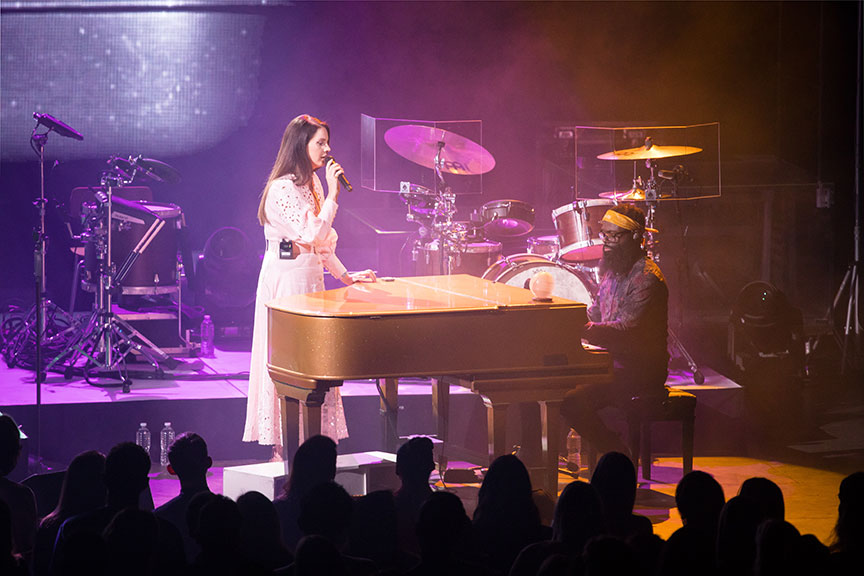