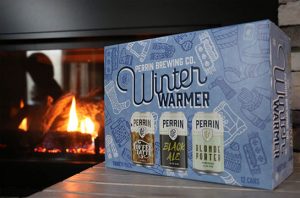 Perrin Brewing Company is Michigan based, so this whole story is just a tease unless you’re ready for a near 20 hour drive. We were intrigued because once it got cold we started switching out our beer koozies for whiskey stones. Who really drinks copious amounts of beer in the winter? Not us. But Perrin, a CANarchy collaborator like our own Oskar Blues, Odell, and others, announced the release of their new “Winter Warmer Pack… presenting the perfect mix of flavors to keep tastebuds toasty all winter long”. Ok, tell us more.

“The pack includes new Coffee Latte Brown Ale… the Black Ale, and [the] Blonde Porter round out the pack. This chill-defying collection of brews appeared at the Perrin Pub on November 7, with distribution throughout the state of Michigan to follow.”

The state of Michigan? Really? Luckily, they sent me a sixer to sample the goods so I could tell you exactly what you’re missing out on. The Black Ale “is counter-intuitive. It pours dark as night but drinks like a summer afternoon,” they claim. I can verify, that’s at least 90 percent true. It’s still dark for a light beer drinker, but feels much better than a light beer on a cold night, and resolves not to overpower the taste buds like most dark ales do.

I was excited for this Blonde Porter. Googling, it was the only Blonde Porter I could find. I’m sure there are more, but I love the rarity of it. What an interesting idea, and speaking of sunshine… wow. There’s something absolutely gorgeous about this beer. “A new take on a classic style creating a light blonde-colored, full flavored beer.” This one happens to be an ale with chocolate. It’s perfect, exactly the kind of beer I could drink any day of the year, but especially in the winter months.

Saving what I hoped was the best for last, I concluded my sampling with the Coffee Latte Brown Ale. Things I like include: Coffee ?, Lattes ?, and Brown Ales ?. All signs are go. Verdict? I’ve never had a coffee ale that tasted more like coffee, that I can recall.

I was really hoping to find something wrong with these beers. A laudatory article can seem like rubbish. Fact is, I’m a fan. Let’s be clear that I don’t like all the popular beers or “best” beers. I did, however, spend two years in BeNeLux countries, drinking beers from where they were first invented, developing my palate. 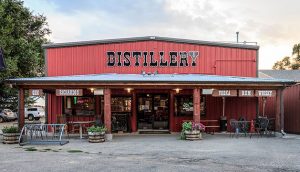 Perrin Brewing nailed this. I may still stick to whiskey and scotch for most of winter, with some Glühwein on particularly frosty nights, but I will be on the lookout for Perrin’s Winter Warmer pack to keep the fridge stocked. I recommend you do the same.

Speaking of whiskey and other immaculate spirits, recent Breckenridge Craft Spirit Fest double gold winners and north BOCO badass distillery, Spirit Hound will be celebrating their 7th Anniversary on December 7th.  You can meet the distiller, tour the distillery, and sample their spirits. We may even grab a bottle or two while we’re there because you can never have too much Spirit Hound on the shelf.

For event info, check out their Facebook page, head over to events, and look for the “We’re 7! Let’s Party Like It’s 1944”  party. “It’s time to break out your Rosie the Riveter costumes and WWII military dress, because it’s time to party like it’s 1944!,” says the event page. And plan ahead because Lyons is having a Christmas parade and fireworks earlier that same day.