Oskar Blues Brewery, Boulder County’s behemoth craft beer maker, prides itself on bringing bold change to the craft beer industry. Now it has announced that it is going to change something new – it’s look. 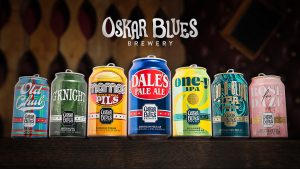 The brewer has brought a retooled branding standard to its can lineup. New packaging can be found on cans of the well-known Dale’s Pale Ale, Mama’s Little Pils, Old Chub, and G’Knight beer as well as on offerings that fans are less familiar with, like their Rose for Daze and the Can-O-Bliss Tropical IPA.

Each can will feature a different, fresher look that mirrors its contents. Mama’s Little Pils features a smooth look with retro 1970’s vibes, while Old Chub’s scotch ale bears a tartan-like pattern. The Rose for Daze can is appropriately pink while the Can-O-Bliss line features a swirled, psychedelic pattern.  G’Knight and Dales pale look the most similar but are streamlined and Dale’s has lost its signature Colorado mountain imprint.

A newly designed and prominent Oskar Blues seal ties them together. It’s creative font on a bold badge is a callback to the company’s original logo. 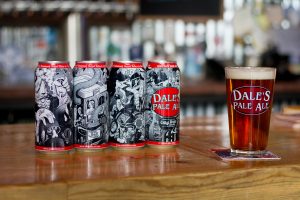 In presenting the new look, founder Dale Katechis said, “Sometimes, there are just things we have to leave to kind of grow up a bit.” Management felt that a new look could help address some of the challenges that their growth has brought on. One of the most notable areas of growth is that Oskar Blues now makes beer in two additional facilities located in North Carolina and Texas. New branding could help ensure that all three of these regions feel appreciated.

Beyond location, the company hoped the branding change would help them clarify its name. Oskar Blues’ signature beverage, Dale’s Pale Ale, has gotten so big that some customers mistake it for the brewery.  As Senior Marketing Manager Aaron Baker explained, “We wanted to make sure that beer drinkers knew that Oskar Blues Brewery made Dale’s Pale Ale. We also want them to know that if you dig Dales, you might dig Can-O Bliss too.”

It’s more than understandable that there’s some confusion given the kind of growth the company has experienced. After it started in 1997 as a community-focused street side restaurant in Lyons, CO, it kicked off brewing production a short two years later with just 340 barrels of beer. Two decades later, the company brewed 160,000 barrels of beer, which are distributed throughout the US and in 20 countries.

One driver of its growth was the company’s move in 2002 to can its craft beer. No other major craft brewer was doing it on a large scale at the time, but the Oskar Blues team thought it made sense. The move made brewing history and now most other beer makers are following their lead. Dales Pale Ale stands as the nation’s number 3 top selling craft can six-pack at U.S. grocery stores.

In 2015, Oskar Blues protected what the company had grown with an innovative business move that further disrupted the industry.  That year,  in response to growing financial pressures faced by medium and large sized breweries, the company began to work with Fireman Capital Partners to establish CANarchy. This business has evolved into a collection of seven other well-known craft breweries from around the country, led by Oskar Blues. Currently CANarchy is working to expand the market power of its brands and has plans to open a joint taproom in North Carolina.

Providing a new logo that represents this much evolution isn’t always easy, even when it’s necessary. The Oskar Blues team determined to not only take it on, but to tackle the project in house. The process took 6-8 months with involvement from Katechis. It also included retailer and distributor feedback. Everyone seems happy with the results and the cans are currently appearing on liquor store and grocer shelves throughout the company’s distribution area. We look forward to a new era of Oskar Blues continuing the great craft beer traditions of Colorado.