Paul Wedlake Kills One Shoot at a Time 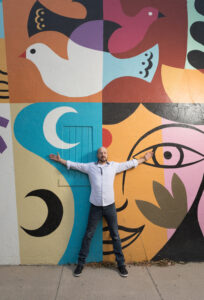 When I called Paul Wedlake for our scheduled interview, it was less of a formal interview than two guys that know each other too well having a laugh about what a mess we are. As managing editor of Yellow Scene Magazine, for just over three years now, I have worked with Paul damn near every month, except one or two, including one he missed while on a rafting trip in Arizona. He would later protest that this was the only scheduled shoot he’s ever missed, in his entire career.

And he’s had a long career. In the course of our hour or so conversation, he reminisces on how he was introduced to photography by his father, who was a photographer, and developed a stronger appreciation in high school, when he joined the yearbook committee. He realized that having a camera around your neck and confidence in your gait means you’re allowed to go pretty much anywhere you want, even if just to the lunch room to hang out with a girlfriend. That was his HS girlfriend.

He met his last girlfriend in college, where he studied photojournalism and other professional interests, not quite sure he wanted to follow in the old man’s footsteps. After, he and his future wife were living in Detroit, where they were both working in a very competitive environment as photography assistants. 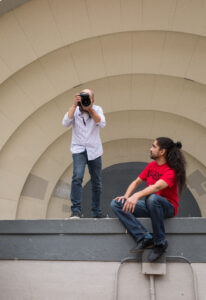 Having fallen in love, both with each other and with photography, they moved to Colorado where they lived in a tent by Clear Creek for a month until they got a place in Golden, where Paul was able to work on his career while managing a building, the Armory. This is a place that is notorious for ghost stories and danger so, nearly a decade later, when they decided to raise a family, they moved to Old Town Arvada, where they reside to this day, working from home as photographers and raising two children.

Which brings us to the current collaboration.

Paul’s first full year of covers for Yellow Scene was 2015, with the wildly popular and heavily collected album cover series, where we took locals in our community and styled them like Michael Jackson’s Thriller and the Beatles’ Sergeant Pepper’s Lonely Hearts Club Band. He had, he recalls, already done a few covers for us before that. Paul Wedlake Photography and Yellow Scene have been making magic ever since.

Now, I’ll be honest and say that Yellow Scene doesn’t pay the bills for Paul. He’s actually a successful corporate photographer who makes his bread-and-butter shooting for corporations throughout the region, and he’s very good at it. If you need high-level photography, of any caliber, he’s definitely a go-to guy. But like he says every time we do something weird, like when we had French Davis ride his motorcycle up the sidewalk in front of Boulder’s Fox Theater, or when we accidentally had the cops show up to kick out 30 restaurant owners we staged in front of the Longmont Sugar Mill, when we did a gorilla style photoshoot in the middle of the street without permission, “we always do fun shoots for Yellow Scene. That’s why I like it.”

And we do. We always manage to come up with shoots that are ridiculous, strange, and fun. We did the freestyle fun of October 2017 with Jamie Temple, Case Logic founder, and former CEO, up at Chautauqua throwing tapes in the air. We did 2018’s Legends of BOCO series, which saw the police contact I mentioned earlier. We went through 2019’s DiverCity series, which featured a variety of diverse faces from BOCO, including our governor.  We’re currently finishing the 2020 OurTicles series, shooting our fave past and current employees in their favorite places, like French on a motorcycle. I know, we’re absolutely out of control, but Paul loves it. And he’s so good and getting the shot.

As YS continues to grow and age, Paul’s kids are doing the same. He says he’s got one driving, and one about to be, so it’s time for another car. Maybe it’s time for another camera. His father was a photog, as he is, and his brother is a videographer. His mother was a nurse, as his sister is. Both he and his wife are photographers. Both his kids are showing interest in the family business. The apples, in this family, clearly don’t fall too far from the family tree. That is a beautiful thing, both for family legacy and for our communities. The world will never have too many creatives, too many artists, too many souls seeking to capture the world around them for posterity, for all of us.

That’s a legacy we can get behind. And with Paul behind the camera, that’s a past, present, and future we’re excited about. I’ve already asked him what he wants to do for next year’s cover series. We have some ideas in the works. One thing I know for sure, Paul shooting our covers means they’re going to continue to be excellent.

Click, click, shutterbugs. Head over to Paul Wedlake Photography to check out his portfolio, including work he’s done for us. Or just peruse this page. We’ve included as many as we could.