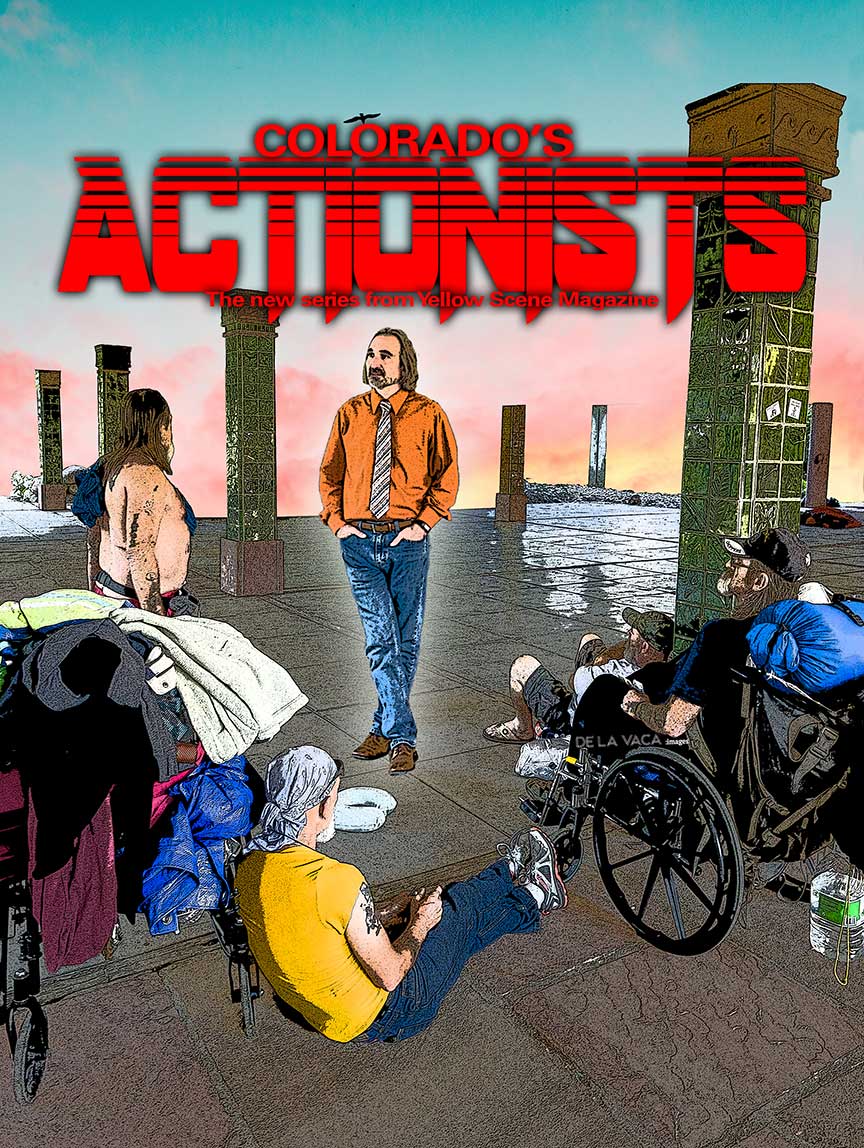 I don’t remember when I met Darren O’Connor. Darren has been a presence for as long as I remember. I have always counted on Darren just being there, helping shape the most important policies – all while advocating for the most vulnerable of our populations. Darren has become a well-known presence throughout the region.

Darren has long been a voice of the unhoused, being a relentless thorn in the City of Boulder’s side. For years he has advocated for them to take a more compassionate approach to helping people. He helped found and serves on the board for the NAACP Boulder County and nonprofit Feet Forward; he recently graduated from law school after leaving a career as a literal rocket scientist, in a quest to help others; and he established his own private practice.

Uncomfortable in front of the camera, Darren was most clearly in his element when we spent time with some unhoused men, talking to them about what they needed. Watching Darren, I knew then why I was drawn to him in the first place. His caring and non-judgmental nature of others, his sincere interest in making life better for all, and his willingness to be a fighting advocate, an Actionist.

Darren tells me he got his start as an activist during the 2009 economic crash and the subsequent housing crisis. People who were following all the rules were still losing their homes. He tells me he started out wanting to do sit-ins and block the police from coming to people’s homes, but it turned out he had to learn the law to help people. When asked what got him started, he tells me; “You know they had crashed the entire economy, and were benefiting from their greed and horrible financing policies all by taking people’s homes.”

He recounts a story where he was showing up to a foreclosure resistance for a grandmother who had lived in her home for 12 years, volunteered in the community and was just asking for some time to catch up. Instead he was met with a SWAT team, facedown with a gun pointed at his head. 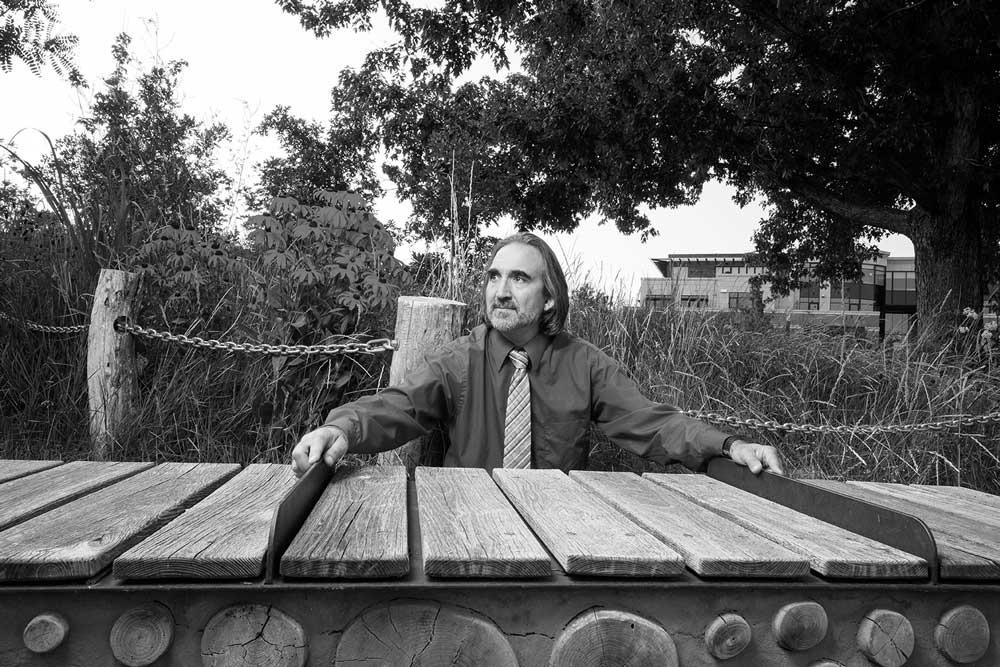 His desire to help people stay in their homes led him toward working on legislation through the Colorado Foreclosure Resistance Coalition and helping start Denver Homeless Out Loud; he credits Terese Howard and others with being the force behind what it is today. He tells me how there used to be shelter through churches in Boulder that anyone could come into so long as they did not create conflict. Sadly, the City of Boulder shut this program down, “Because it was too easy for people to have a safe place to stay.” Darren continues; “Every policy the City of Boulder and the County passes is to make it as hard as possible for the unhoused.”

He tells me that the vast majority of people had a story of a traumatic event that led them to being homeless. That work made him realize that anyone could be homeless, including himself.

“It is emotionally and physically draining work. Basically, when you do this work, it’s not appreciated. You do it because it’s important.”

His advocacy also led to a former state representative, Angela Williams, (who has a history of very friendly relations with the business sect, including strong alliances to Oil and Gas), placing a protection order against him. It was Ms. Williams’ effort that killed a bill designed to protect homeowners from fraudulent banking practices. Ms. Williams represented a community with a 50% foreclosure rate. Darren vowed to show up to every town hall, every legislative session where Ms. Williams was in attendance. He tells me he left his Colorado Foreclosure Resistance Coalition card on her door and asked her to please call him. She responded by filing for a protection order. The protection order she sought against Darren was denied based on his First Amendment rights.

I asked him if this is what led to him deciding to become an attorney. No, it was not the guns pointed at his head, it was not Williams, it was a grandmother in Loveland in foreclosure. She had had a traumatic brain injury and was on a witness protection program as a victim. Her bank had released her name and address and were kicking her out of her home. Through a lot of work, he managed to get both the number for Steve Mnuchin’s office and got the Colorado Attorney General’s Office to work with him. He has the call recorded where it is admitted that this grandmother’s name was shared with her abuser. He was able to use the bank’s error to force a refinance of her home. 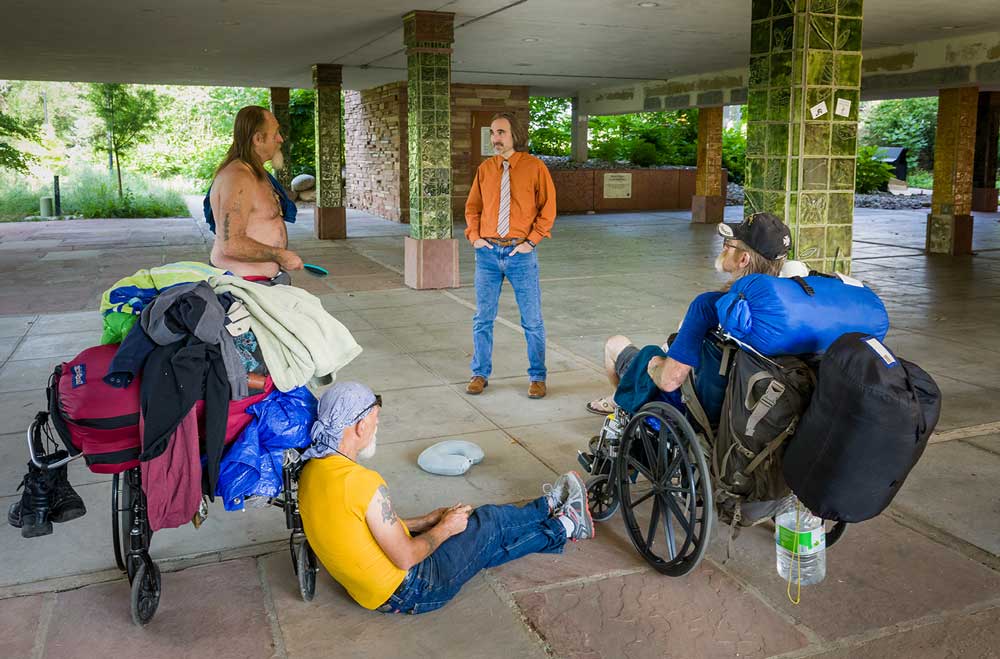 Another event in Boulder, a homeless woman was at the bus station to help her disabled friend get on the bus but was harassed by a security guard for not having a ticket. She explained she was waiting for her friend to arrive and he told her to leave the bus station. When she did not, he tackled this 90-pound woman to the ground, and called the police on her. Darren said that; “At that point I am just crying, because she had to plead guilty to get out of jail. It’s just so f*cking unfair.”

That’s when Darren decided to go to law school. He graduated in 2019 after being able to attend on a full-ride scholarship and today is working to help those who have experienced police brutality and punitive measures for being unhoused. As part of his work with the NAACP he works to craft kinder policies in Boulder. He tells me it’s not just an uphill battle, but by all appearances Boulder is moving toward harsher policies, not kinder.

Asked why he continues to fight when the odds seem stacked against winning, he replies, “One of the weird things that happened to me becoming a lawyer, is at least three times a week I wake up in the middle of the night. It is emotionally and physically draining work. Basically, when you do this work, it’s not appreciated. You do it because it’s important.”