Editor’s note: This story was originally published by The Sentinel Colorado and was shared via AP StoryShare. It was written by Carina Julig, a Sentinel Staff Writer.

Gang violence in the metro area and beyond has long been a problem, and reporter Julian Rubinstein delivers a much needed long-look, this time on the screen.

Last year, Rubinstein shone light on the convoluted politics of anti-gang activism in the metro area with his book “The Holly: Five Bullets, One Gun and the Struggle to Save an American Neighborhood.” He’s following it up this year with a documentary of the same name, which is set to debut at the Mountainfilm Festival in Telluride over Memorial Day weekend.

Rubinstein spent eight years working on the book and documentary, and his meticulous attention to detail is a much-needed corrective to the drive-by style that coverage of violence often receives. The issues he delves into — gun violence, gang activity, underinvestment in Black communities — are more relevant now than ever for Aurora and people across the Denver metro area and once the film has made the festival circuit it deserves to have a wide release.

Taking much of the same narrative arc of the book in visual form, “The Holly” follows former Blood member turned racial justice and anti-gang activist Terrance Roberts as he founds an anti-gang initiative and fights to redevelop historic Holly Square in northeast Denver, and then as he fights a criminal charge for shooting a gang member at his own peace rally at the Holly in 2013.

Roberts has always maintained that he acted in self-defense, and much of the film’s action takes place as he is out on bond awaiting trial. The camera follows Rubinstein as he attempts to make sense of Roberts’ most explosive claim about what caused the shooting: that active gang members recruited into the Denver Police Department’s anti-gang efforts put a target on his back. 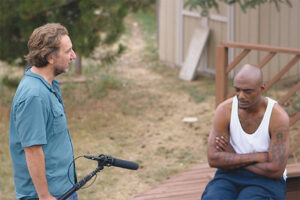 What Rubinstein unearths raises a lot of questions about DPD’s work to curb gang violence. Some of the people extolled as reformed gang members are described by others as active participants in the violence they’re supposedly quelling. As shooting deaths in the metro area skyrocketed during the pandemic — fueled in part by gang activity — it’s an allegation worth taking seriously. And if police initiatives to stop gang violence aren’t effective, as Roberts argues, then it’s especially troubling that they’re being used to sideline grassroots efforts.

The same qualities that make Roberts such a charismatic activist make him a stellar documentary subject, and he grants the filmmakers a generous degree of access to his life. Roberts’ friends and fellow activists such as Jason McBride also provide valuable context to the film.

“I always thought that was a real credit to him, that he opened up his life to allow others a window into a world that we don’t often get to see that closely,” Rubinstein said of Roberts at an advanced screening of the documentary at the Sie FilmCenter.

Roberts was not paid to appear in the film and did not have editorial control over the book or the documentary, Rubinstein said. Though he’s the central character, the film doesn’t shy away from scrutinizing him at times.

Roberts’ larger-than-life presence appears to be a family trait. Some of the most compelling moments in the film involve watching Roberts interact with his father, pastor George Roberts, who died from COVID-19 last year at age 65. Roberts became a minister after getting clean from drug addiction and spending time in jail, and was a revered community presence in northeast Denver. The film is dedicated to his memory.

One of the strengths of Rubinstein’s book was the way it delved into the past to illustrate the historical forces that fueled gang activity. The film makes excellent use of archival footage and TV news coverage to tell its story, something Rubinstein said drew him to the documentary format in the first place. It also uses footage that Roberts and his outreach workers filmed themselves of his activist work.

One of the most moving segments of the film is footage of Roberts speaking to three young men, who tell him they would rather work than be in gang life but that they have limited opportunities. As two of the teens perform a rap for the camera, viewers are told they both later died in shootings.

Much of the film focuses around political intrigue, but it’s those sequences that remind the audience what drives Roberts’ work and what’s at stake if efforts to curb gang violence are hijacked by political opportunism. “The Holly” makes a compelling case that Denver power brokers capitalized off of Roberts’ successes without doing much to help, and were then quick to turn their backs when things went south.

The film only lightly touches on Roberts’ life post-trial, which has not been dull: he was heavily involved in the 2020 protests demanding justice for the deaths of George Floyd and Elijah McClain, and along with five other people was given criminal charges for protesting outside a police station in Aurora in July 2020. After initially being accused of inciting a riot, the following year new District Attorney Brian Mason dropped all charges in connection to the incident because he did not believe prosecutors could win a conviction.

Now, Roberts is running for mayor of Denver. With current mayor Michael Hancock (who does not come across as compelling in “The Holly”) term-limited, Roberts is competing against a crowded field of hopefuls.

With everything he’s already been through, it’s easy to wonder why Roberts is voluntarily choosing to get into what’s almost certain to be another messy political battle, but it’s hard not to admire his commitment to his convictions. Near the end of the film, one of Roberts’ friends describes him as “riding a tiger:” Once you get on, you can never get off. In his case, that appears to be both a blessing and a curse.