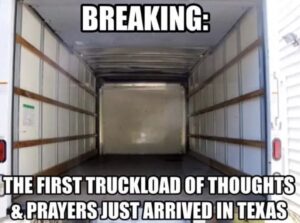 The “bipartisan” gun legislation in Congress is an utter sham.  Among other things, it actually does nothing about guns.   It is like offering a drop of water to a starving man.   As is often the case, Democrats have been hoodwinked by an amoral and manipulative GOP.

The bill, which appears headed for passage and a Biden signature, serves several GOP strategic aims:  it creates the false appearance of compassion for dead children; and it allows them to claim that they took action, thus blunting any criticism as midterm elections approach.  Ever-naive Democrats characterize it as an important first step.  It is more like stepping over the edge of a cliff and hoping it might be the beginning of a good hike.

I stumbled on a news report of the Uvalde massacre that included photos of all the victims, along with a sweet comment or two about each child.  It is seldom I tear up reading the news, but this was heartbreaking in its simplicity.

I will spare you the images.  I can’t bear to return to them.  But here are a few descriptions, paired with the sentiments Republicans expressed about the pending legislation.

Layla Salazar, 11. Layla loved to swim and dance. And she could really run. The 11-year-old won six races in a recent field day and took home blue first-place ribbons.

Lauren Boebert said, “You better believe I am going to have a way to protect myself. I  will continue to carry.”

Makenna Lee Elrod, 10.   Allison McCullough will remember Makenna’s smile, which she said could light up a room.

“Just to name a few…” he added on Twitter.

Xavier Lopez, 10. “He was funny, never serious, and his smile,” his mom, Felicha Martinez, told The Washington Post. “That smile I will never forget. It would always cheer anyone up.”

Louis Gohmert said, ”Look, maybe if we heard more prayers from leaders of this country instead of taking God’s name in vain, we wouldn’t have the mass killings like we didn’t have before prayer was eliminated from school.”

Tess Marie Mata, 10. Tess had a jar full of cash in her purple bedroom, according to The Washington Post. She was saving up money for a family vacation to Disney World.

Eliahna “Ellie” Amyah Garcia, 9.  “Eliahna was such a sweet girl with a lovely and beautiful soul,” a GoFundMe page in her honor says. “She would light up everyone’s world with big smiles & big hugs.”

One GOP senator, granted anonymity to speak candidly, asked’ “Why the hell are we doing this?”

Eliahna A. Torres, 10  “She was an amazing young girl with so much potential,” a family member told The New York Times. “She was a leader and loved by all her family.”

Rep. Lee Zeldin (R-NY) simply wrote: “Shall Not Be Infringed!”

Jayce Carmelo Luevanos, 10. The 10-year-old would make his grandparents a pot of coffee every morning.  He wrote notes like, “I love you, Grandpa.”

A Florida Republican gun dealer created an image of a man brandishing an assault rifle, with the slogan: “BE A MAN AMONG MEN.”

Maite Yuleana Rodriguez, 10. Green was Maite’s favorite color. She was always sporting her pair of lime green Converse tennis shoes. She had hand-drawn a heart on the right shoe.

TheTexas Republican Convention opposed red flag laws, which allow guns to be seized from people deemed to be dangerous. Those laws, according to the resolution, “. . . violate one’s right to due process and are a pre-crime punishment of people not adjudged guilty.”

Jackie Cazares, 9. “Jackie was the one that would go out of her way to help anyone,” Jackie’s father said.

Marjorie Taylor Greene doubled down on her opinion that the only way to protect children from guns is to protect them “with guns.”

Jailah Nicole Silguero, 10.  It was uncharacteristic of her, but Jailah told her parents she did not want to go to school the morning of the shooting.

Rep. Billy Long (R-MO) blames gun violence on abortion: “Something has happened to our society. I go back to abortion, when we decided it was okay to murder kids in their mothers’ wombs.  Life has no value to a lot of these folks.”

True enough, Mr. Long.  Life has no value to a lot of these folks.