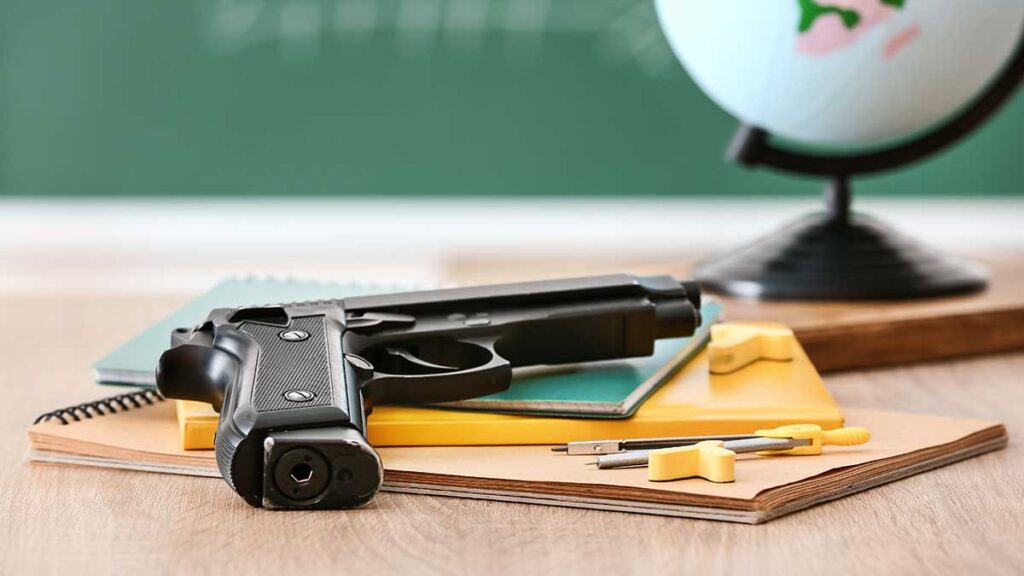 Amid a seemingly never-ending cycle of mass shooting > expressed horror and outrage > thoughts and prayers > political grandstanding > next mass shooting, there’s one proposed “solution” that seems to rear its head whenever the rabid pro-2A crowd gets on their bully box: Strapping educators with firearms so they can “protect” the children.

Never mind that the massacre at Robb Elementary in Uvalde, TX occurred in a state that has some of the most permissive gun laws in the nation — where state legislators in 2021 passed permitless carry legislation within two years of the mass shootings in El Paso and Odessa that slaughtered 30 people.

With each of these school shootings comes a growing chorus of what still appears to be a vocal minority of people who claim that arming teachers will solve this problem.

Not only does this just sound absurd — the data available not only decries the logic, but it also implies that the vast majority of people who will be harmed will be students — specifically, students of color.

We only need to look at the 22 years of history since Columbine occurred to validate this concern. A nationwide response to that tragedy on April 20, 1999, where 12 students and one teacher were gunned down at Columbine High School in Columbine, CO was the introduction of the School Resource Officer — a duly appointed law enforcement officer assigned to each school under the mandate of “protecting the children” from mass shooter events.

According to a Brookings Institution study from April, 2021: “The Federal Community Oriented Policing Services in Schools Program (COPS) distributed $68 million to jurisdictions in 2000, resulting in the hiring of 599 SPOs (School Police Officers, also called School Resource Officers—SROs) in 289 communities across the country.” States and municipalities subsequently supplemented that funding, and the program became a cemented initiative across the nation.

While school shootings continued unabated, the real targets of the SROs turned out to be students of color, who found their way into the justice system for rule infractions that, pre-SRO-era, would have been handled as simple disciplinary actions by school administrators.

“Black students comprised 36% of arrests in the 2015–2016 school year, despite accounting for only 15% of the student body…Rather than preventing crime, SPOs have been linked with increased arrests for noncriminal, youthful behavior, fueling the school-to-prison pipeline,” says the report.

Further studies paint a sobering picture as to why this happens.

“Our research found that Black boys can be seen as responsible for their actions at an age when White boys still benefit from the assumption that children are essentially innocent,” said Phillip Atiba Goff, PhD, of the University of California, Los Angeles, regarding a study by the American Psychology Association published in 2014 that examined the attitudes of both professional law enforcement personnel and undergrads studying education and criminal law.

These attitudes haven’t evolved. We need only revisit the civil unrest during the summer of 2020 to see that communities of color remain marginalized in so many ways where law enforcement is concerned.

If so, the answer is obvious. Arm the teachers.